VANCOUVER, BC / ACCESSWIRE /February 25, 2021 /Pampa Metals Corp. ("Pampa Metals" or the "Company") (CSE:PM)(FSE:FIRA)(OTCPK:PMMCF) reports that geophysical surveying work has started at its Redondo-Veronica project in northern Chile, supported by continuing enhanced geological mapping with an experienced consultant geologist in order to improve on historic work and assist in accurately positioning potential drilling targets. Additionally, the mining property has been expanded to the west.

Redondo-Veronica is situated approximately 40 Km north-northeast of the giant La Escondida - Zaldivar copper mining district, which is the world's largest single porphyry copper operation with annual production of well over 1 million tonnes of fine copper. The project is also located approximately 55 Km south-southwest of the Gaby copper mine. Redondo-Veronica and the copper mines mentioned all occur within the general north-south trending mid-Tertiary porphyry copper belt of northern Chile, the world's single most productive copper belt.

3D Vector Induced Polarization (VIP) and Magneto-Telluric (MT) surveying has started at the project, and detailed magnetics surveying will follow in due course. Southernrock Geophysics is the contractor.

The 6,600-hectare property at Redondo-Veronica was recently expanded as, unusually, some ground became free adjacent and to the west of the property, which is otherwise surrounded by third-party properties.

Approximately three quarters of the 14,000-hectare Arrieros property was successfully surveyed with 3D VIP and MT geophysical data. The geophysical data acquisition over the final quarter will be completed once the Redondo-Veronica survey is executed. Meanwhile, processing of data acquired to date is underway. Additionally, magnetics surveying at Arrieros is due to start shortly using a remote drone, which is being imported from another country and should be available for surveying work within days.

Technical information in this news release has been approved by Mario Orrego G., geologist and a registered member of the Chilean Mining Commission and a qualified person as defined by National Instrument 43-101. Mr. Orrego is a consultant to the company.

Pampa Metals is a Canadian company listed on the Canadian Stock Exchange (CSE: PM). Pampa Metals has interests in an outstanding 59,000-hectare portfolio of projects prospective for copper and gold located along proven mineral belts in Chile, one of the world's top mining jurisdictions. See attached map for the locations of the Company's projects. The Company has a vision to create value for shareholders and all other stakeholders by making a major copper discovery along the prime mineral belts of Chile, using the best geological and technological methods. For more information, please visit Pampa Metals' website here www.pampametals.com.

Neither the CSE nor the Investment Industry Regulatory Organization of Canada accepts responsibility for the adequacy or accuracy of this release.

Reference to existing or historic mines and projects is for reference purposes only. The reader is cautioned that there is no evidence to date that a comparable mineral resource could be found at Pampa Metals' projects. 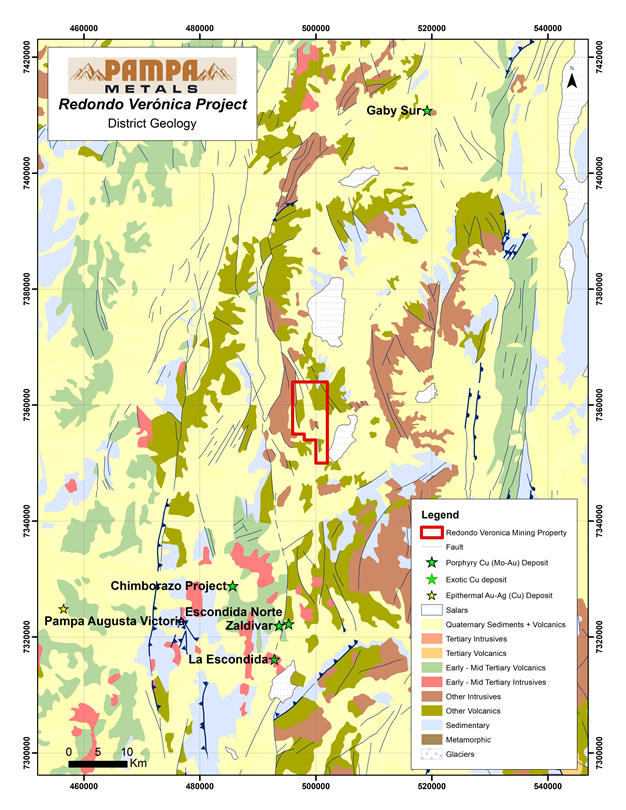