OTTAWA, ON / ACCESSWIRE / March 8, 2021 / Today, on International Women's Day, Equal Voice is wrapping up their first virtual iteration of the Daughters of the Vote program with a simulated House of Commons session. Throughout the virtual sitting, the 338 young women and gender diverse youth that have been selected to represent their federal riding heard from Elder Claudette Commanada as part of the opening ceremonies, the Honourable Anthony Rota, the Right Honourable Kim Campbell, and the leaders of all federal parties. Thirty-four delegates representing ridings across the country made their own statements about issues they are passionate about, their lived experiences, and their visions for the future of Canada.

"We are thrilled that we were able to adapt our programming into a virtual format for this year's Daughters of the Vote," said Eleanor Fast, Executive Director of Equal Voice. "In many ways, the challenges of the pandemic have illuminated yet again how critical it is to have the voices of women and gender diverse people in policy and decision-making spaces. We are so grateful to all our speakers, partners, and this year's delegates for sharing their ideas, experiences, and visions for the future over the past few days."

The virtual House of Commons session today concludes the four-day Daughters of the Vote program that began on Friday. Throughout the program, delegates have participated in discussions about working at all levels of government, inclusive politics, media engagement, and Parliamentary committee simulations, in addition to today's House of Commons simulation.

Equal Voice also welcomed many incredible speakers from all political backgrounds to this year's program, including the Honourable Jean Augustine, the Honourable Jody Wilson-Raybould, the Honourable Lisa Raitt, the Honourable Geneviève Guilbault, and former deputy leader of the NDP, Megan Leslie. This year's Daughters of the Vote would not have been possible without the contributions of various community organizations such as the National Association of Friendship Centres, EGALE, Group Femmes, Politique, et Démocratie, the National Council of Canadian Muslims, the Equality Fund, and Reconciliation Canada.

"Building off of the program, we at Equal Voice look forward to seeing the future successes of this year's delegates as their work improves Canada's political institutions and communities for years to come," continued Fast. "We all know that the challenges that lie ahead for our country are large and unprecedented, but we have seen over the past few days that Canada's young women and gender diverse leaders will ensure that our future is extremely bright."

Equal Voice wishes to thank all the elected officials, political parties, the Government of Canada, and all corporate and community sponsors for their generosity and support. Without them, Daughters of the Vote would not have been possible.

The virtual House of Commons session can be viewed at https://www.cpac.ca/en/direct/cpac3/571953/daughters-of-the-vote-2021/. 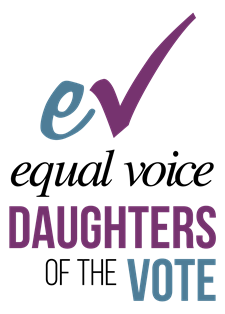 ABOUT DAUGHTERS OF THE VOTE

Daughters of the Vote is an ambitious initiative by Equal Voice that began in 2017 to mark the 100th anniversary of some women getting the right to vote in Canada and the still incomplete journey of women's full participation in politics today. 338 delegates representing every federal riding in Canada were selected through an open call for applications to participate in a dynamic political leadership summit in Ottawa. We were fortunate to replicate the event in 2019 and will be doing so once again virtually in March 2021 thanks to generous funding from the Department for Women and Gender Equality.