VANCOUVER, BC / ACCESSWIRE / June 7, 2021 / Tier One Silver ("Tier One" or the "Company")is pleased to announce that common shares of the Company will begin trading on the TSX Venture Exchange on June 9, 2021 under the symbol TSLV.

A Message from Peter Dembicki, President, CEO & Director:
"Tier One Silver represents multiple world-class exploration opportunities within a world-renowned geological belt. Our flagship project, Curibaya, has demonstrated remarkably high-grade samples on surface, with significant geophysical targets directly below. We look forward to being the first company to drill the project and plan to commence our inaugural program in June."

A Message from Ivan Bebek, Co-Chair, Co-Founder, & Director:
"Tier One Silver is the second company created out of splitting Auryn in October 2020, and since its formation, the Company has added significant value through extensive exploration efforts and acquisitions to deliver a high calibre exploration company. The Curibaya project is an exceptionally unique opportunity due to the scale of the mineralized system on a world-class belt, the quality of the targets and the incredible high-grade sampled on surface."

"A special thank you to our long-term supporters and stakeholders. Additionally, to our technical team, which has identified one of the best undrilled precious metals targets we are aware of globally."

Tier One Silver is an exploration company focused on creating value for shareholders and stakeholders through the discovery of world-class silver, gold and base metal deposits in Peru. The Company's management and technical teams have a strong track record in raising capital, discovery and monetization of exploration successes. The Company's exploration assets in Peru include: Hurricane Silver, Emilia, Coastal Batholith, Corisur and the flagship silver-gold project, Curibaya, which is rapidly advancing toward its first drill program.

Curibaya Project: Overview & Infrastructure:
The Curibaya property covers more than 11,000 hectares and is situated in a copper porphyry belt that hosts some of Peru's largest porphyry deposits, including Freeport McMoRan's Cerro Verde deposit, Southern Copper's Cuajone and Toquepala deposits as well as Anglo American's Quellaveco deposit. The project is the first major epithermal occurrence in this belt, which covers the regional Incapuquio fault zone and subsidiary structures. These are interpreted as one of the fundamental controls for both epithermal and porphyry styles of mineralization within the region. Importantly, the licenses host a number of cross structures to the Incapuquio fault zone that are considered highly prospective. Initial surface sampling programs at Curibaya have returned numerous high-grade samples of silver, gold and copper over a 4 x 5 km alteration system.

The Curibaya project is well situated from an infrastructure standpoint, approximately 48 km north-northeast of the provincial capital, Tacna, accessible by road in 1.5 hours.

The Company has received its FTA (Ficha Tecnica Ambiental), the necessary environmental permit, from the Peruvian Ministry of Energy and Mines for drilling at the Curibaya silver-gold project in Southern Peru. The FTA allows the Company to drill up to 40 holes from 20 platforms over a 473-hectare area, which is within the 20 square km mineralized alteration zone where high-grade vein corridors have sampled up to 298 kg/t silver and 934 g/t gold.

High-Grade Silver & Gold Mineralization on Surface:
Rock grab sampling at the Curibaya project has returned grades of up to 298,000 g/t silver and 934 g/t gold, with samples spread across a 4 x 5 km alteration system. Rock grab sample highlights are shown in Table 1 and Figure 1.

Geologic Context of Vein Mineralization:
The high-grade precious metal veins sampled to-date on the project range in width from five centimetres to one metre (m) and are situated in north - south corridors radiating from identified flow dome complexes. The sampled veins are primarily situated in the overlying volcanic sequence above the flow dome complexes and provide a good indication of the metal budget; however, they are not the target themselves. Tier One believes the veins represent a high-level dispersion of a robust precious metal system that is situated along the margins of the dome complexes at shallow depths. These flow dome complexes provide a geological mechanism to concentrate fluid flow where potential geologic targets include high-grade veins, vein stockwork zones and silicified hydrothermal breccias that would be situated along the margins of the domes. 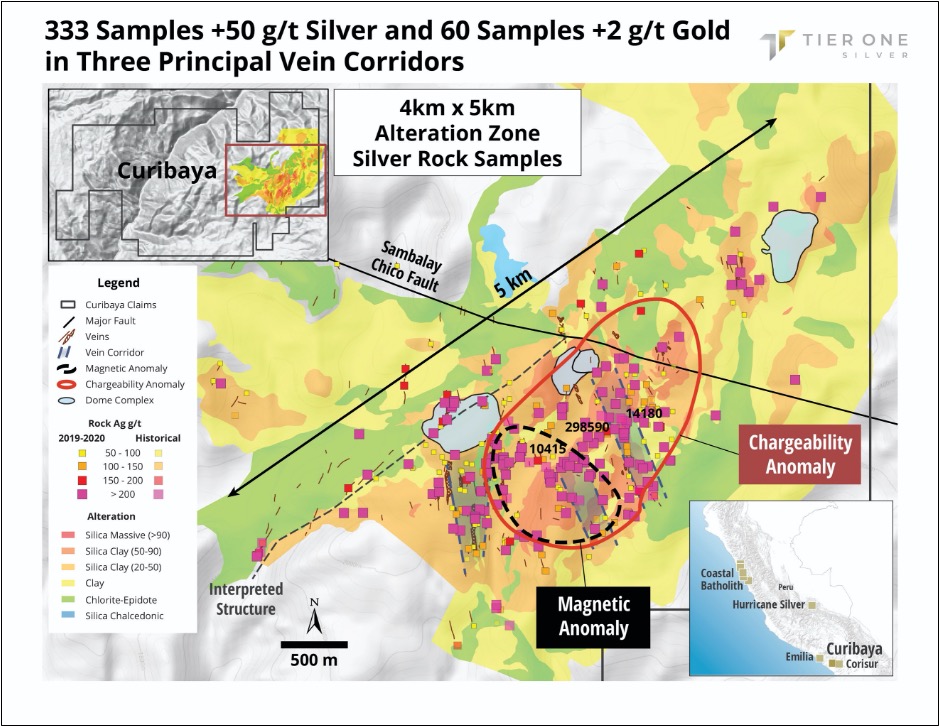 Figure 1: Illustrates the silver results from the latest rock sampling program at the Curibaya project. The bulk of these samples are situated above a chargeability anomaly with a peak value of 298 kg/t silver.

Large-Scale Geophysical Anomalies Below High-Grade on Surface:
Tier One has identified a 2 km by 750 m chargeability anomaly near surface, which represents a precious metals target, and a magnetic anomaly located spatially below the chargeability anomaly (Figure 2). The technical team interprets the magnetic anomaly to be the intrusion responsible for driving the high-grade silver and gold mineralization sampled on surface and believes it may also represent a potential porphyry target beneath the precious metals system. 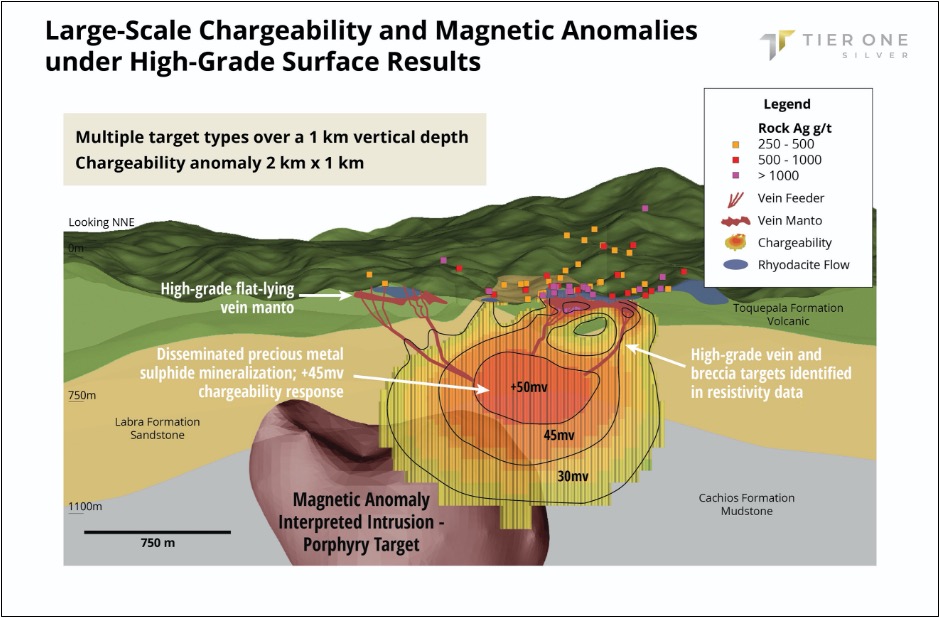 Figure 2: Illustrates the chargeability and magnetic geophysical responses associated with the high-grade mineralization sampled on surface at Curibaya. The chargeability anomalies effectively image the feeder structures at the upper level of the survey with the lower level of the survey imaging the potential for disseminated precious metal mineralization. In addition, the Tier One technical team has interpreted the high magnetic response as the causative intrusion to the mineralized system, indicating a potential porphyry system at depth.

Paleocene Aged Mineralization:
Tier One has identified the age of the mineralization at the Curibaya project to be Paleocene, ranging from 55 to 61 million years. This is equivalent to several world-class deposits in the southern Peru porphyry belt, including Quellaveco, Toquepala and Cuajone (Figure 3). Tier One's technical team believes the Paleocene age of the mineralization, along with the large precious metal budget observed within high-grade veins over a 4 x 5 km alteration system, support the potential for a world-class discovery at the Curibaya project. 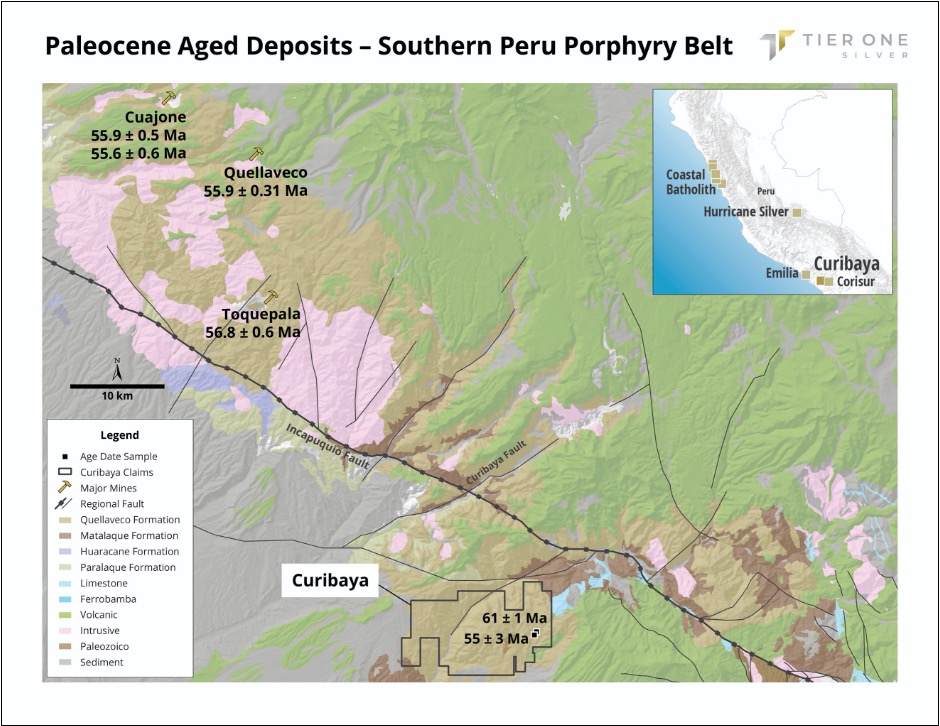 Figure 3: Illustrates that the Cuajone, Quellaveco and Toquepala deposits are equivalent in age to the Curibaya project.

Additional Corporate Highlights:
Tier One Silver completed its financing prior to filing a prospectus, supported by top investors and mining professionals, and did not raise funds concurrent with this go public event.

Tier One Silver is well-funded with over C$13 million in cash to carry out an extensive inaugural drill program at the Curibaya project in southern Peru.

Tier One is led by an experienced team of mining professionals including:

Michael Henrichsen (Chief Geologist), P.Geo is the QP who assumes responsibility for the technical contents of this press release.

ON BEHALF OF THE BOARD OF DIRECTORS OF TIER ONE SILVER INC.

For further information on Tier One Silver Inc., visit www.tieronesilver.com or contact Natasha Frakes, Manager of Corporate Communications at (778) 729-0600 or info@tieronesilver.com.

About Tier One
Tier One Silver is an exploration company focused on creating value for shareholders and stakeholders through the discovery of world-class silver, gold and base metal deposits in Peru. The Company's management and technical teams have a strong track record in raising capital, discovery and monetization of exploration success. The Company's exploration assets in Peru include: Hurricane Silver, Emilia, Coastal Batholith, Corisur and the flagship project, Curibaya, which is rapidly advancing toward its first drill program. Tier One is seeking a U.S. listing with a targeted completion in the second quarter of 2021. Visit www.tieronesilver.com for more information.

Curibaya Age Dating, 2020
A total of four samples of altered volcanic rocks were collected for Ar-Ar geochronology analysis. Samples were sent to Pacific Centre for Isotopic and Geochemical Research, University of British Columbia, in Vancouver, Canada. They were analyzed through neutron irradiation at McMaster Nuclear Reactor in Hamilton, Ontario, and a VG5400 mass spectrometry. The best statistically justified plateau and plateau ages picked. Two out of four samples had isochrons sufficient for plateau age determination.