Exploration and Expansion Drilling Is Underway at the Gold Range Project, Arizona

CALGARY, AB / ACCESSWIRE / September 14, 2021 / CANEX Metals Inc. ("CANEX" or the "Company") is pleased to announce that a reverse circulation drill program is underway at the Gold Range Project, Arizona. Three holes have been completed at the Excelsior Zone and a fourth is in progress. The Company plans to drill up to 50 holes during the current drilling program.

Dr. Shane Ebert, President of the Company stated, "We are very pleased to have started our third drill program at Gold Range and are excited to follow up our recent bulk tonnage discoveries and work to expand the zones and further test the underexplored mineralized trend that hosts mineralization. With continued success this program could provide a solid foundation for a larger resource definition program".

The current reverse circulation drill program will consist of up to 50 drill holes and a minimum of 3000 metres of drilling. The program will initially focus on expanding high grade near surface mineralization identified at the Excelsior Zone before expanding outward along the 3 kilometre long mineralized trend linking the historical Excelsior, Malco, and Eldorado Mines. The Excelsior Zone was first drill tested by the Company in February of this year and returned very strong grades such as 1.6 g/t gold over 35.1 metres including 2.2 g/t gold over 24.4 metres (previously released see June 14, 2021 news release). The program will also look to expand mineralization at the Eldorado and Malco zones and test multiple areas along the known trend. A few holes are planned to test larger targets in the central and northern part of the claim block. The drill program is expected to run into late October with assay results released in several batches as they become available. 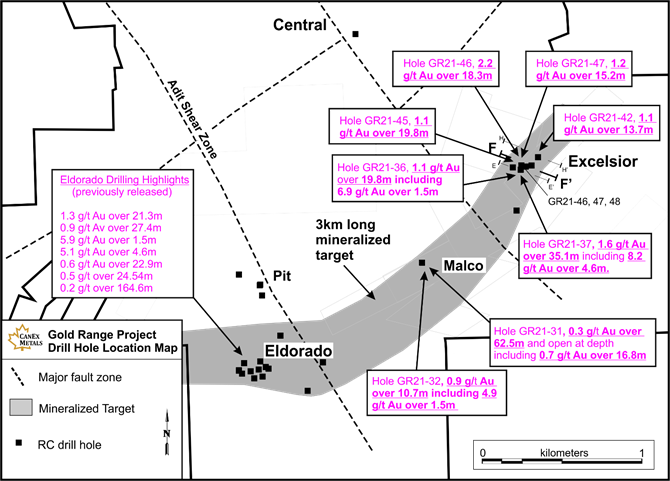 CANEX Metals (TSXV:CANX) is a Canadian junior exploration company focused on advancing its Gold Range Project in Northern Arizona. Led by an experienced management team, which has made three notable porphyry and bulk tonnage discoveries in North America, CANEX has identified and tested several targets which host the potential for bulk tonnage oxide gold mineralization at its Gold Range Project. Recent drilling has identified near surface bulk tonnage gold potential along a recently identified trend extending from the Eldorado to Excelsior Zones. Hole GR21-37 from Excelsior returned 1.6 g/t gold over 35.1 metres including 8.2 g/t gold over 4.6 metres. These new discoveries occur along a 3 kilometre long highly prospective mineralized trend that has seen limited modern exploration.

The Company remains focused on testing and advancing key exploration targets on the Gold Range Property through continued exploration and drilling.

Dr. Shane Ebert P.Geo., is the Qualified Person for CANEX Metals and has approved the technical disclosure contained in this news release.

Except for the historical and present factual information contained herein, the matters set forth in this news release, including words such as "expects", "projects", "plans", "anticipates" and similar expressions, are forward-looking information that represents management of CANEX Metals Inc. internal projections, expectations or beliefs concerning, among other things, future operating results and various components thereof or the economic performance of CANEX. The projections, estimates and beliefs contained in such forward-looking statements necessarily involve known and unknown risks and uncertainties, which may cause CANEX's actual performance and financial results in future periods to differ materially from any projections of future performance or results expressed or implied by such forward-looking statements. These risks and uncertainties include, among other things, those described in CANEX's filings with the Canadian securities authorities. Accordingly, holders of CANEX shares and potential investors are cautioned that events or circumstances could cause results to differ materially from those predicted. CANEX disclaims any responsibility to update these forward-looking statements.