LONDON, UK / ACCESSWIRE / September 14, 2021 /Rogue West, An Online Trading Card/NFT Game That You Really Own (Crypto TCG) has announced that they will collaborate with the Samurai Launchpad for their $ROGUE token offering on the 14th September at 14:00 UTC, prior to the Uniswap offering on the 21st September at 14:00 UTC.The $ROGUE token is being offered on the Samurai Platform with a $300 USD allocation per participant for the CyberFi/Samurai Community. This allocation will be subject to a 50% available on listing and a vesting of 25% linear for 2 month.

Built by a small indie studio in Europe, the team are passionate about video games and especially board games and TCGs!

In 2018, they released their first commercial project to the Steam store - Fated Kingdom digital board game. We did not use the services of publishers and we ourselves went from a design document to publishing and post-release marketing.

Fated Kingdom is an old school digital board game sandbox for 2-4 players with shared physical space and no rules enforced by computer. The Kingdom of Kinmarr is falling apart, and to survive in this dark times, players need to roll the dice, draw cards from the decks and move along a game board.

The game became a commercial success and received very positive reviews from players and press. During the development, they gained valuable experience in independent development. And now we are ready to take on a much larger project - Rogue West: Crypto TCG.

Check out Fated Kingdom on Steam!

Rogue West In The Spotlight:

"Travel across a dystopian alternative Wild West America, where danger lurks around every corner: zombies, fanatics and deranged outlaws of all kinds. Build a unique deck and compete with other players!

Unlike other digital TCGs, our cards are NFTs and issued in strictly limited quantities, so they have a real collector's value."

With a prototype to be released in Fall, things are advancing quickly for the nimble team of Rogue West. First features include:

Simple rules, combined with deep game play (The more cards you have, the more ways you can outsmart your opponent with unusual tactics!) and a unique & refreshing combat play, cast players in a Gothic Western. No unlimited editions here. YOUR cards, YOUR non-fungible ownership - true ownership in the spirit of comic books created by Mike Mignola & Guy Davis. Buy, sell and exchange cards on Open Sea or any ERC20 NFT marketplace. 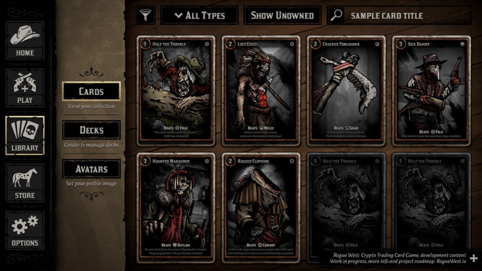 Rogue West Cards will have 3 levels of rarity: 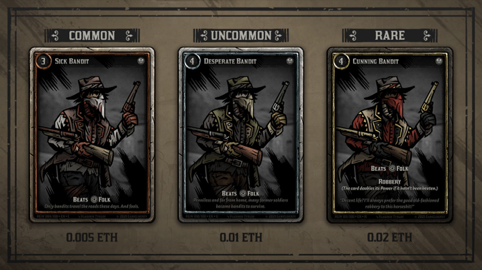 There will be several other card-sets that are much more common and cheaper. Thus, current cards recently launched on OpenSea will become gems for collectors & will be able to give specific advantages in the game. A minimum number of cards will always be put to play as Rogue West's multiplayer ecosystem grows its fanbase.

All cards are published exclusively on the OpenSea platform.

With a prototype expected to be released this Fall, things are advancing quickly for the nimble team at Rogue West.

The prototype is available right now:https://roguewest.io/play/.

Follow Rogue West on their media channels to stay up to date with the latest news: