EAST LANSING, MI / ACCESSWIRE / October 27, 2021 /Many traveled to the Spartan Stadium on Oct. 22nd to honor MSU Board of Trustees Chair Emeritus Joel Ferguson and his 30+ years of serving the Lansing community and beyond. It was a star-studded evening with an impressive guest list, from the Legendary Little Rock Nine Ernie Green to Court TV's Judge Mathis. Coach Tom Izzo was the emcee and introduced several prestigious speakers.

Even Rev. Jesse Jackson's wife, Jacqueline attended along with their son, Jonathan, who brought greetings on behalf of his father. During a moment of reflection, Jonathan recalled Joel's words to his father during the 1988 Presidential campaign, "if we invest more in the front side of life, we don't have to invest so much in the backside of life".

Magic Johnson shared a heartfelt message of Joel's lifelong mentorship to him, "You taught me, always go to win whether I'm on the court or off the court. You showed me that black men could own businesses. I saw someone who looked like me doing great things in the city and I wanted to be just like you. You changed so many lives and helped so many people." 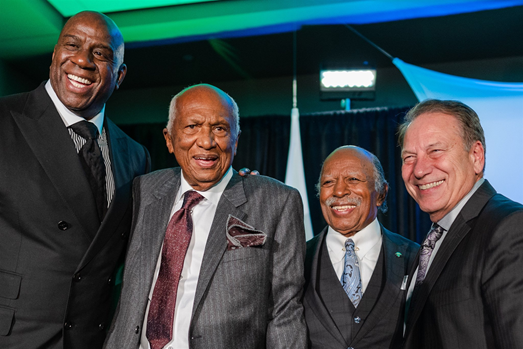 Nick Saban, Gregory Kelser, Governor Gretchen Whitmer, Rev. Al Sharpton and President Bill Clinton sent video messages that spoke to Joel's character and his impact on them. One highlight of the evening was when Andy Schor presented a proclamation making Oct. 22, 2021 in the city of Lansing, Joel Ferguson Day.

Joel is an icon of opportunity and a legendary connector. These traits drive his values, as President Bill Clinton reinforced: "You care about the right things. You put your time, your money, and your heart in the right places that will create better tomorrows for young people."

Throughout his life, Joel has mentored many of Lansing's young people, athletes and non-athletes alike, about the importance of education and civic duty in one's personal and professional lives. This work continues today. "Joel is the most relentless person I know and he's not done yet," said MSU Head Coach Mel Tucker. 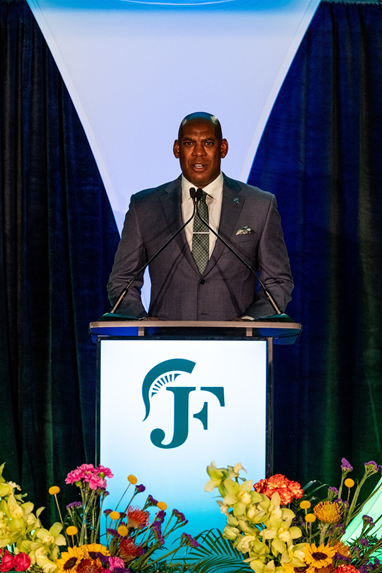 "The main thing," the Reverend Al Sharpton said, "is that despite all his success is his character and unquestionable integrity. Joel is a stellar person with values and beliefs that he will not compromise."

MSU Trustee Melanie Foster explained Joel's impact. Serving for 33 years on the board, twelve as board chair, alongside seven MSU presidents: "Joel's hard work, perseverance, character, and passion for all things Michigan State University pushed him to lead MSU to enhance enrollment from 42,000 to 50,000 and over $5.2 billion in new construction" during his tenure.

"Joel Ferguson has been a phenomenal leader in our community, whether it's with Spartan nation, the state of Michigan, or the city of Lansing," reflected Michigan Governor Gretchen Whitmer, "he's been a tireless advocate continually opening doors that weren't open before and propped them open so others could walk through." 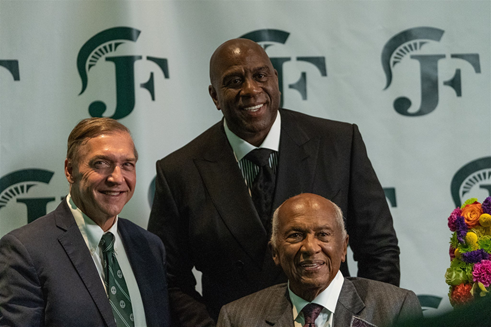 Joel's mantra is improving lives by connecting people, stressing the importance of education, building civic coalitions, and driving progress through access to opportunity. This extended to his colleagues on the MSU board of trustees. As Joel himself says, "you win with good people." 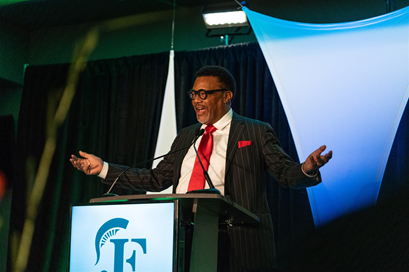 Joel is a graduate of Lansing Sexton High School and enlisted in the U.S. Marine Corps. He then enrolled at Michigan State University in 1959. Joel financed his education by working nights on the Oldsmobile assembly line in Lansing for six years. He spent the next two years teaching and later became the Greater Lansing Urban League On-the-Job Training program director.

Joel co-founded F&S (First Housing Corp) Development Company and was one of the co-founders of Capital National Bank. He has led countless multi-million-dollar developments. He was the co-founder, president, and owner of WFSL-TV, Channel 47, a Lansing independent affiliate and the founder, owner and president of WLAJ-TV, Channel 53, Lansing's ABC affiliate.

Joel has been active in Michigan civic affairs for over 60 years. In 1967, he was the first African-American and youngest member to be elected to the Lansing City Council. He was also the first African-American to serve on the Ingham County Board of Supervisors. Joel is a Golden Heritage member of the NAACP and has sat on the Boards of the Lansing YMCA, Boy's Club, Arthritis Foundation and Junior Achievement.

Joel served as six-time state-wide elected chairman and a four-time elected Vice Chairman of Michigan State University Board of Trustees. Ferguson joined the Board of Directors of Blue Cross-Blue Shield of Michigan Foundation, ultimately becoming Vice President. He served on the Greater Lansing Safety Council and was a member of the Citizens Commission to Improve Michigan Courts.