VANCOUVER, BC / ACCESSWIRE / December 7, 2021 / Pampa Metals Corp. ("Pampa Metals" or the "Company") (CSE:PM)(FSE:FIRA)(OTCQX:PMMCF) is pleased to provide an update for its 7,600-hectare Cerro Buenos Aires copper-gold exploration project located in northern Chile, where all assay results from the wide-spaced, 9-hole, 2,738m reverse circulation ("RC") drilling program completed in September have been received. Drilling was focused on the Cerro Chiquitin target in the northern third of the Cerro Buenos Aires project area. Assay results confirm the interpretation of a porphyry-related hydrothermal system from the previously reported geological observations of the drilling, which were announced in a news release dated September 15, 2021.

"We are very pleased with these positive results," commented Julian Bavin, CEO of Pampa Metals. "Pampa owns one of the largest prospective property packages in Chile comprising a 62,000-hectare portfolio of eight projects for copper and gold located along proven mineral belts. We look forward to updating shareholders with a solid flow of news as we advance these projects in the coming months."

Geological and geochemical results to date from wide-spaced drilling at Cerro Buenos Aires have clearly vectored towards a fertile porphyry-type hydrothermal system to the south and southeast of the Cerro Chiquitín tourmaline breccia. The 9 holes drilled to date extend over a north-south oriented prospective corridor some 4.5 km x 1 km, largely obscured by 40m to 80m of post-mineral gravel cover, and results have narrowed the target area to a 1 km x 1 km core area of interest. In view of this, additional follow-up work comprising detailed induced polarisation (IP) profiles and deeper diamond drilling is currently being planned for the area.

Drill holes in the immediate vicinity of the partially outcropping Cerro Chiquitín tourmaline breccia (RC holes CBA-01, 07 and 08), as well as those to the south and southwest (RC holes CBA-02 and 06), returned intercepts in gold and silver and significant anomalies in copper (up to 709ppm), molybdenum (up to 169ppm), zinc (up to 650ppm), lead (up to 560ppm), arsenic (up to > 1,000ppm), and antimony (up to > 250ppm), which suggest the inner periphery of a porphyry-related fertile hydrothermal system. Assay results from holes located in post-mineral covered areas to the north (CBA-03, 04, 05 and 09) are consistent with the propylitic exterior to a porphyry system.

A 14m intersection with 0.18 g/t gold (including 6m @ 0.22 g/t Au) in CBA-08 within a magmatic-hydrothermal breccia with a tourmaline or quartz-tourmaline matrix and pyrite disseminations, stands out. This intercept has a good correlation with anomalous values in zinc and arsenic (30m @ 221 ppm Zn and 26m @ 715 ppm As) and possibly corresponds to sub-epithermal porphyry-related mineralization. This, together with other intercepts, is highly indicative of a fertile, porphyry-style, hydrothermal system to the south or southeast of Cerro Chiquitin and those drill holes located in the immediate vicinity. The porphyry system may be cored by copper-gold/gold-copper mineralisation, but also shows evidence of having potential for peripheral precious metals-rich veins.

Pampa Metals is now planning approximately 20 line km of pole-dipole IP surveying in the post-mineral gravel filled pampa to the south and southeast of Cerro Chiquitín, with contractor availability currently in January 2022. Plans also include the drilling of two or three diamond drill holes to depths of around 750m to follow up the results of the proposed IP survey and the drilling to date, in order to explore for the principal objective of a mineralised inter-mineral porphyry.

A total of 1,279 samples from RC drill cuttings together with 141 control samples (11% - value standards, blank standards, duplicates) were analysed by ALS Patagonia by Fire Assay with Atomic Absorption finish (AA23) for gold, and ICP-Mass Spectrometry after a 4-acid digestion (ME-MS61) for multi-element analyses. All samples were previously prepared using the PREP-31B protocol at ALS Patagonia Chile.

Pampa Metals carried out all field sampling at the drill sites following a previously prepared in-house protocol to international standards. Control samples with standards from a known manufacturer, quartz blanks and duplicates of coarse material obtained from the drill cuttings were inserted into sample batches according to the protocol. Samples of the post-mineral gravel overburden were obtained from the top portions of each drill hole, but were not sent for analysis after geological logging. Quality Assurance and Quality Control ("QA/QC") is routinely carried out by ALS Patagonia using its own internal standards and protocols. Such QA/QC results from the Pampa Metals' batches were satisfactory. Additionally, a QA/QC assessment was performed in-house using the blind control samples inserted by Pampa Metals and reviewed by Company management. The QA/QC results successfully passed the QA/QC protocols including the certified values of the value standard manufacturers.

Pampa Metals is a Canadian company listed on the Canadian Stock Exchange (CSE: PM) as well as the Frankfurt (FSE: FIRA) and OTC (OTCQB®: PMMCF) exchanges. Pampa Metals owns a highly prospective 62,000-hectare portfolio of eight projects for copper and gold located along proven mineral belts in Chile, one of the world's top mining jurisdictions. The Company has a vision to create value for shareholders and all other stakeholders by making a major copper discovery along the prime mineral belts of Chile, using the best geological and technological methods. For more information, please visit Pampa Metals' website www.pampametals.com.

Technical information in this news release has been approved by Mario Orrego G, Geologist and a Registered Member of the Chilean Mining Commission and a Qualified Person as defined by National Instrument 43-101. Mr. Orrego is a consultant to the Company.

The CSE nor the Investment Industry Regulatory Organization of Canada accepts responsibility for the adequacy or accuracy of this release. 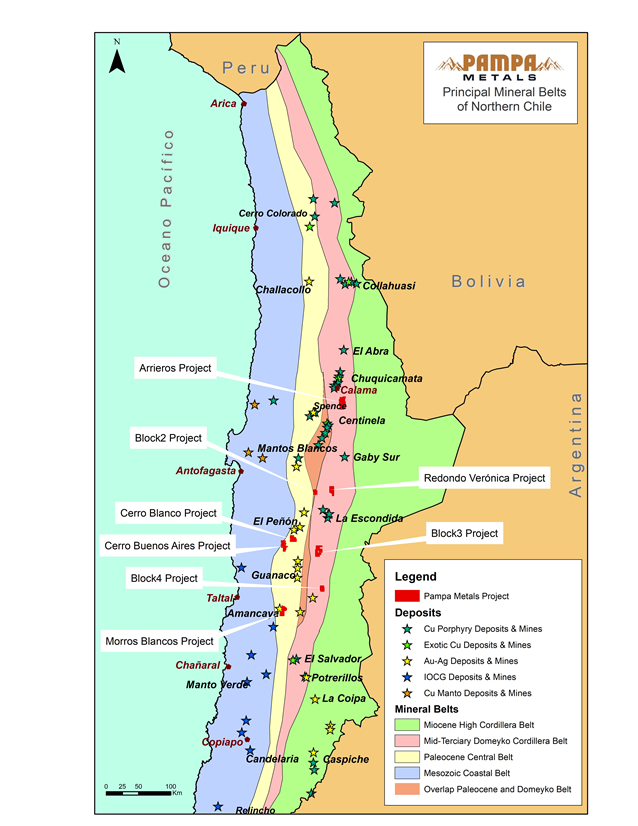 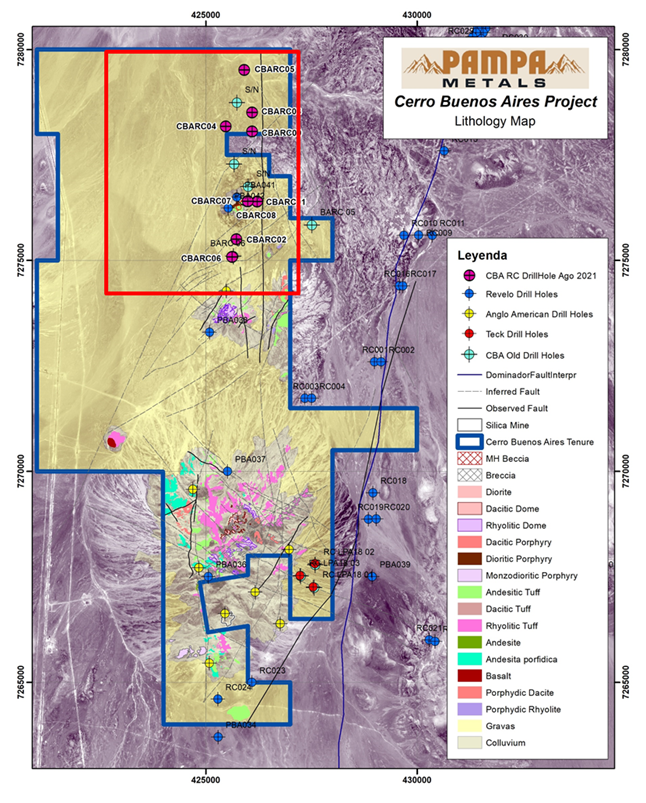 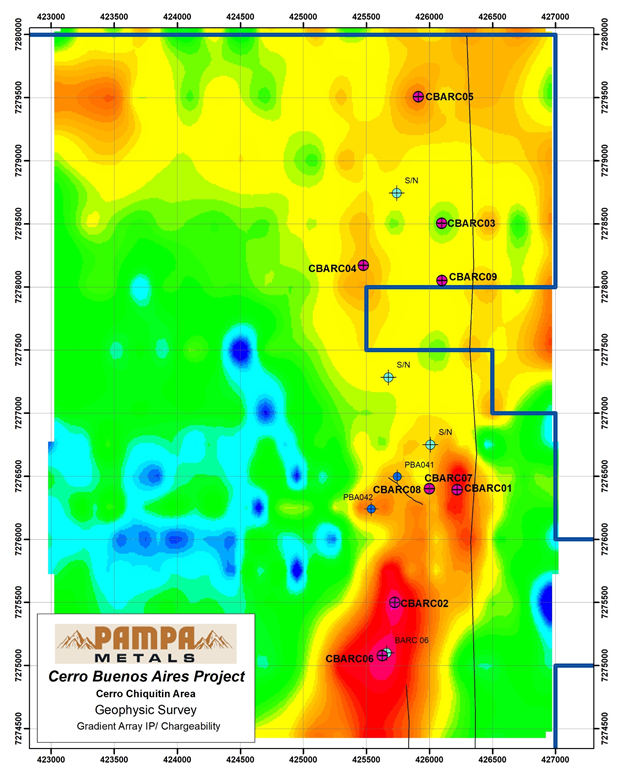 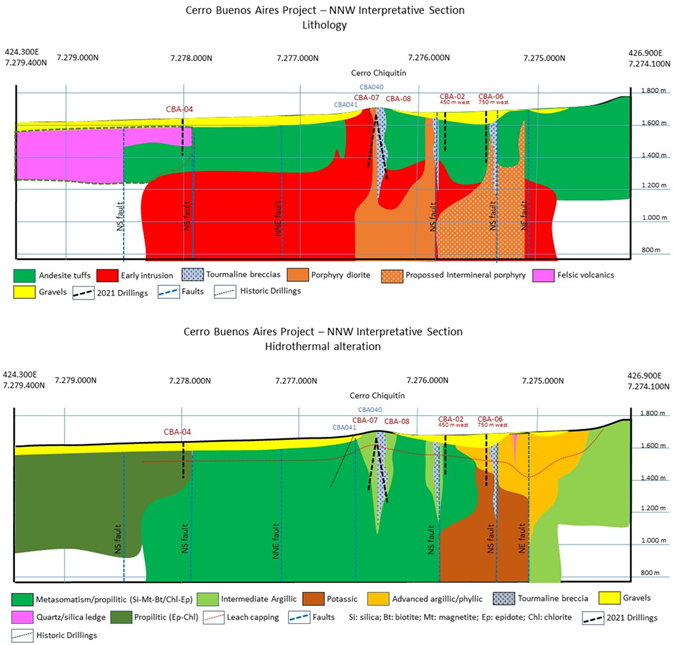