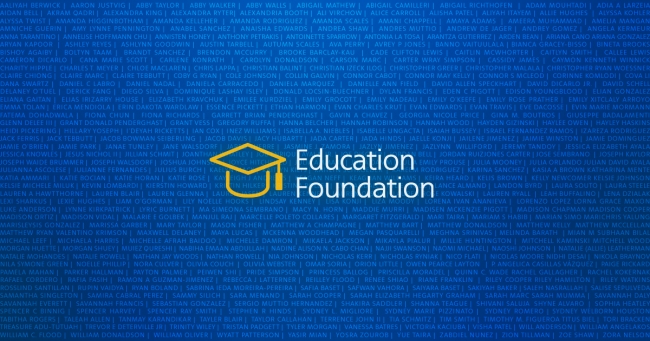 FORT WORTH, Texas, July 30, 2021 /3BL Media/ — The American Airlines Education Foundation awarded $1,161,500 in scholarships to 425 children of team members this year, the largest amount ever distributed.

Each recipient was awarded a $2,500 scholarship, with 99 first-generation college students each getting an additional one-time award of $1,000.

“Our family has invested a great deal in our daughter’s education, and, as most parents know, it’s not always easy,” said Vera Velitchkova, a Premium Customer Service Agent in Phoenix. “For the last four years, American has shared that investment with us by making it more affordable. Being around airplanes inspired my daughter, Lorena, from a young age, and now she’s pursuing her dream of someday working in the aerospace industry. She’s worked so hard, and we’re so thankful that American recognizes that, too.”

In previous years, students were recognized at an in-person celebratory event. This year, however, due to the COVID-19 pandemic, students received congratulatory packages, featuring a message from American Chairman and CEO Doug Parker.

“This year’s group of students endured a great deal over the last year with the many challenges brought on by the pandemic. Through it all, however, they continued to excel both in and out of the classroom,” said Ron DeFeo, President of the American Airlines Education Foundation Board and Senior Vice President of Global Engagement for American. “This year’s class of recipients represent the best of our global community. We could not be prouder to support them as they continue on their academic journeys.”

This year, for the first time, descendants of Trans World Airlines (TWA) team members were eligible for an additional scholarship provided by the TWA Hotel at New York’s John F. Kennedy International Airport in partnership with the Education Foundation. A group of 16 students from across the country were awarded a total of $40,000.

“American Airlines and the TWA Hotel have partnered to bring new life to the iconic TWA brand through the redevelopment of the iconic TWA Flight Center at JFK, TWA’s New York home for almost 40 years,” said Tyler Morse, Chairman and CEO of MCR, developer of the TWA Hotel. “During development, the TWA Hotel team worked closely with American, as the successor to TWA and owner of the TWA brand, to develop the hotel in a way that celebrates the history of TWA and its contributions to aviation. As part of this partnership, the TWA Hotel is proud to provide ongoing support for the TWA Scholarship program, honoring the descendants of TWA employees.”

The Education Foundation received more than 1,100 applications as a part of the competitive process. Managed by third-party scholarship experts, scholarships are awarded based on financial need, academic achievement, extracurricular involvement and commitment to community service and volunteerism.

American Airlines Education Foundation is dedicated to supporting educational initiatives for dependents of airline employees. High school seniors and college undergraduate students are eligible to apply for the scholarships and can receive the award for up to four years.

“Working for American has granted me a lot of opportunities in my own life to build my trip schedule around my son and watch him compete across the country as a runner in high school, and now in college,” said Grant Nichol, a Los Angeles-based Flight Attendant for American. “As a single father, having the ability to do those things has meant so much. Jesus is going to do amazing things with his life, and this scholarship is going to help him get there.”

For more information about the Education Foundation scholarship, visit aa.com/scholarships. To learn more about the ways American Airlines is giving back to the communities it serves, please visit aa.com/letgoodtakeflight.

American’s purpose is to care for people on life’s journey. Shares of American Airlines Group Inc. trade on Nasdaq under the ticker symbol AAL and the company’s stock is included in the S&P 500. Learn more about what’s happening at American by visiting news.aa.com and connect with American on Twitter @AmericanAir and at Facebook.com/AmericanAirlines.