Vancouver, British Columbia--(Newsfile Corp. - June 2, 2021) - ArcPacific Resources Corp.(TSXV: ACP) ("ACP" or the "Company")is pleased to announce it has intersected a new mineralized shear structure (the "Triple X" structure) and new quartz-carbonate veining in hole 17 (ACP-R-21017) on a 200 metre southern step-out at the Rickard gold project (the "Property") near Timmins, Ontario. Hole 16 (ACP-R-21016),the westernmost hole in the Rickard Main Zone also continued to intersect wide zones of alteration and quartz-carbonate veining with visual sulphide mineralization including pyrite, chalcopyrite, black fine-grained sulphides with molybdenite and a possible telluride mineral (see Figure 1). All holes drilled to date in the phase 1 program successfully intersected zones of quartz-carbonate veining related to shear zones and the system remains open in all directions.

Adrian Smith, CEO of ACP, comments: "We are pleased to see the continuation of the quartz-carbonate veining with impressive visible sulphide mineralization in hole 16, leaving the Rickard Main Zone open in all directions.

We are also excited to discover the first north-south oriented shear structure intersected in hole 17, newly named the Triple X structure. This newly identified structure confirms our suspicions about the Rickard Main Zone veins' extensional nature and highlights the long-lived and multi-phase deformation and hydrothermal activity at the project. The discovery of these north-south oriented structures also further opens the possibilities for multiple north-south shear structures and new extensional mineralized zones to be discovered within the project area."

Hole 16 was drilled from the westernmost pad in the phase 1 drilling program at a minus 65-degree dip and intersected 3 main intervals of variably mineralized quartz-carbonate veining, with associated albite-sericite-silica alteration halos. These veins occurred from 72.5 metres to 121.2 metres down hole within wider zones of quartz, quartz-carbonate, and carbonate stringers. Strong sulphide mineral assemblages are locally present in the veins with pyrite, chalcopyrite, and black fine-grained sulphides with molybdenite and a possible telluride mineral (see Figure 1).

Figure 1: Hole 16 (ACP-R-21016) at 81.10 metres showing bands of sulphides with pyrite and chalcopyrite within a quartz-carbonate vein including a possible telluride mineral.

Hole 17 was drilled at a minus 55-degree dip on a greater than 200 metre step-out to the south from the previous holes at the Rickard Main Zone and intersected a newly identified and mineralized deformation-zone or shear-zone newly named the Triple X structure (see Figure 2). Hole 17 also intersected two new zones of quartz-carbonate veining associated with strong albite-sericite-silica alteration and variable sulphide mineralization (see Figure 3). It is likely that the east-west oriented veins are closely related and are syn-formational to the north south shear zones forming a complex network of shearing and veining that remains open across the property.

The newly identified Triple X shear-zone was intersected at a shallow angle over 33-meters downhole and may be one of several such zones oriented in a general north-south orientation. Massive to semi-massive zones of pyrite and pyrrhotite were also identified in hole 17, as well as pervasive albite-silica-sericite-pyrite alteration completely overprinting the clasts and matrix within the Triple X zone. Multiple phases of intermediate to felsic dykes were also encountered in hole 17 including felspar porphyry which emphasizes the extensional environment in the project area, creating ideal conduits for multi-phase intrusive activity and abundant fluid flow.

Shearing textures such as folded and deformed quartz veinlets and sulphide stringers and separately crosscutting veins showing brittle offset and segmented features indicate that the shear-zones on the Property were long-lived through the ductile-brittle transition implying a deep-seated nature. These structures likely represent second or third order structures to the regional scale North Pipestone Break which is a first order splay off the prolific Porcupine-Destor Fault. The pervasive hydrothermal alteration overprinting most textures within the shear zone and vein halos indicates that these structures not only accommodated movement but acted as fluid conduits and represents an ideal environment for gold transport and deposition. It is possible that the brecciated quartz-carbonate vein fragments observed in the Triple X structure formed as fault-fill veins or shear veins (see Figure 2) making north-south oriented structures on the Property a priority target for phase 2 drilling. 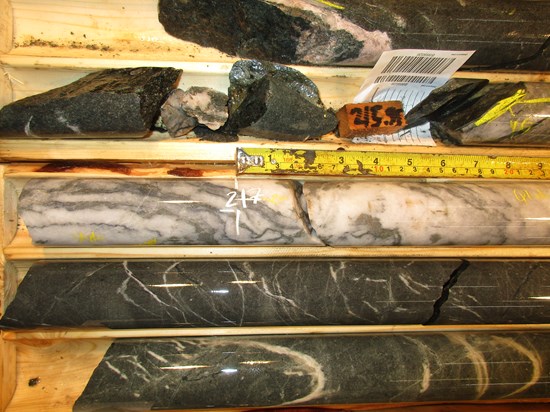 Drill hole locations for holes 1 through 17 can be seen on the Company's website on the Rickard project page. Results from the phase 1 program will be incorporated into the Company's expanding 3D project model which will provide a better understanding of the geological and structural controls on mineralization, and will enable the Company to plan for a potential ramped up phase 2 program.

Initial results are anticipated to be released as they become available within the coming month. Additional pictures of the core have also been uploaded to the Company's website on the Rickard Gold Project page.

The Property covers a prospective 5,656 hectares of the Abitibi Greenstone Belt located approximately 70 kilometres from the town of Timmins in the Timmins Gold Camp which has produced over 80 million ounces of gold over the last 100 years. The Property is road accessible and sits within 25 to 60 kilometers of six currently producing gold mines and eight previous producers. Large areas of the Property remain untested and under cover.

Apparent widths of veins intersected are estimated to be 90% of true widths in holes ACP-R-21016, and true widths are unknown in hole ACP-R-21017.

ArcPacific Resources Corp. (TSXV: ACP) is a Canadian based exploration company expanding the exploration initiative at multiple historic past producing gold and silver mines in the Timmins Gold Camp, Ontario, and in the Nicola Mining Division in Southern British Columbia. The Company is focused on creating shareholder value through new discoveries and strategic development of its mineral properties. For further information, please visit http://www.arcpacific.ca.

ON BEHALF OF THE BOARD OF DIRECTORS

To view the source version of this press release, please visit https://www.newsfilecorp.com/release/86139