Heliostar CEO, Charles Funk, commented, "We now have over 360 metres of continuous, high silver and gold grades at the main Prospecto vein at Oso Negro and have defined drill targets on all three previously known veins on the property. In addition, the company has increased the land holding by over ten times and discovered two new silver-bearing veins. The Fresnos vein is locally up to 70 metres wide and may represent the shallow levels of a system. The Hebilla vein zone has many small, historic workings. Grab samples from these locales contained high silver and gold grades. We are thrilled with these results and look forward to getting our team back onto the project with a plan to complete a maiden drill program once we wrap up our current work program at Unga."

The Oso Negro district is a historic mining area with multiple zones of outcropping veins. Even though the veins contained some historic workings, they remain undrilled. The company completed a detailed mapping and sampling program on the claims purchased in 2020 and also recently completed a reconnaissance program of stream sediments, mapping and sampling on the newly acquired Angel de Plata 2 claim (Fig. 1) .

The systematic sampling of the main claim has defined drill targets on four veins (Fig. 2):

On the newly applied claim a 7,200 metre long, north-northwest trending vein system, Fresnos, has been mapped and sampled. The vein is approximately three metres wide and locally expands to a width greater than 70 metres at the intersection with a splay vein. The majority of samples contain very low grades of silver and gold however the vein may represent the shallow levels of an epithermal system that contains higher grades at depth.

On the same new claim, the team discovered a second zone of veins, the Hebilla veins. These veins host many historic mine workings on clay, quartz and sulphide altered structures and the team mapped this east-west trending vein system over an area of 1,800 metres by 1,000 metres. Six of nineteen dump and grab samples collected in this area returned silver equivalent values over 100 g/t AgEq with a highest value of 1,501 g/t AgEq.

Detailed mapping and sampling will be completed on the new claim over the coming months to advance these two new vein zones to drill ready status. The company plans to undertake a maiden drilling program at Oso Negro in late 2021 upon completion of drilling at Unga in Alaska. 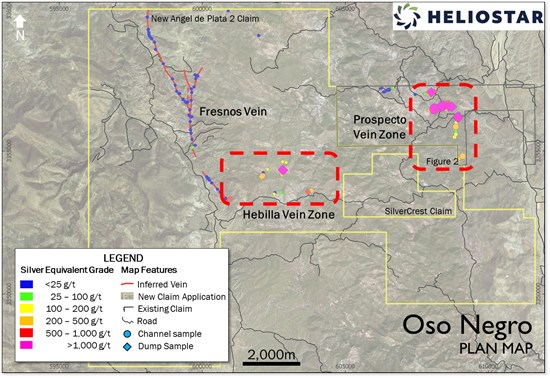 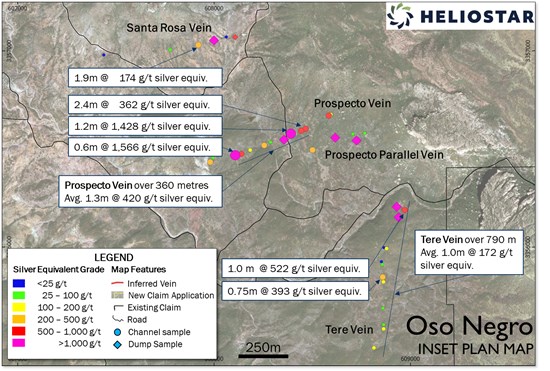 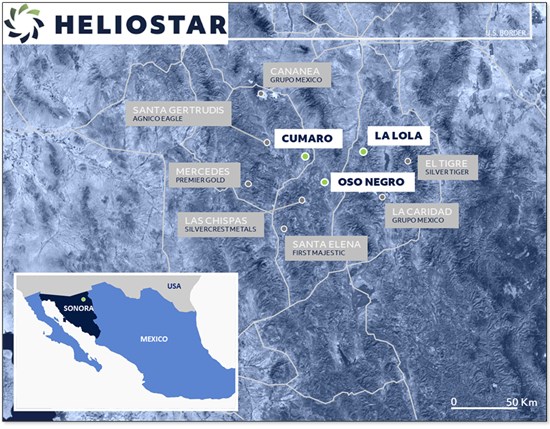 Figure 3: Location map of Oso Negro with nearby deposits and Heliostar projects.

The company has completed four holes at the La Lola project and assays results from the final two holes are expected very soon.

Detailed mapping and sampling has been completed at the Cumaro project and results are also expected in the coming weeks.

Heliostar's portfolio of projects in Mexico are earlier stage than our flagship Unga asset but the company believes each project has the potential to host a significant orebody. The work programs completed in early 2021 have advanced each project and we plan to undertake drilling on each project over the next year.

Drilling continues at a rapid pace at Unga with 26 holes completed to date. Two reverse circulation (RC) drill rigs are at Apollo and one diamond drill rig is in operation at the SH-1 resource. Drilling at Aquila will commence next week.

The company expects to report the first drilling results from the 2021 spring program at Unga in late June/early July.

Heliostar is a well-financed junior exploration and development company with a portfolio of high-grade gold projects in Alaska and Mexico. The company's flagship asset is the 100% controlled Unga Gold Project on Unga and Popof Islands in Alaska. The project hosts an intermediate sulfidation epithermal gold deposit, located within the district-scale property that encompasses 240km2across the two islands. Additional targets on the property include porphyry, high sulphidation and intermediate sulphidation epithermal veins. On Unga Island, priority targets include: the SH-1 and Aquila, both on the Shumagin Trend, the former Apollo-Sitka mine, which was Alaska's first underground gold mine and the Zachary Bay porphyry gold-copper prospect. Gold mineralization at the Centennial Zone is located on neighbouring Popof Island within four kilometres of infrastructure and services at Sand Point.

In Mexico, the company owns 100% of three early-stage epithermal projects in Sonora that are highly prospective for gold and silver. Cumaro forms part of the El Picacho district, while the Oso Negro and La Lola projects are also prospective for epithermal gold-silver mineralization.

The Company's disclosure of technical or scientific information in this press release has been reviewed and approved by Stewart Harris, P.Geo., Exploration Manager for the Company. Mr. Harris is a Qualified Person as defined under the terms of National Instrument 43-101.

To view the source version of this press release, please visit https://www.newsfilecorp.com/release/86305