A property-wide prospecting and sampling program was completed over a two-week period during which time 12 rock grab samples were collected and submitted for analysis at Actlabs, Thunder Bay. In addition to reconnaissance geological mapping, the prospecting program targeted northwest trending structures, interpreted from regional magnetics, and thought to be related to the structures that are associated with ultramafic-mafic hosted Ni-Cu-PGE sulphide mineralization at Escape Lake and Current Lake, being explored by Clean Air Metals. Management cautions that past results or discoveries on properties in proximity to Spearmint may not necessarily be indicative to the presence of mineralization on the Company's properties.

Much of the Property is under cover and mapped regionally as east-west trending granitic and sedimentary rocks. However, the current prospecting program revealed two areas consisting of a mixture of mafic intrusive in outcrop and ultramafic and mafic boulders, some which contained between trace and 5% pyrite, chalcopyrite, and pyrrhotite. This is significant in that no ultramafic or mafic rocks were previously observed in this region of the Property, with their presence suggesting the possibility for ultramafic-mafic intrusions on the Property and which could contain Ni-Cu-PGE sulphide mineralization (see Figure 1). Areas around the interpreted northwest trending structures were prospected but as they are located in recessed topography, typically along drainage routes, no exposures were observed. These interpreted structures coupled with the locations of the ultramafic-mafic rocks provides for excellent future exploration target areas.

A follow up work program is currently being formulated and recommended geophysical surveys include a high-resolution drone magnetic survey over the western portion of the Property, followed by induced polarization (IP) surveys over target areas, in order to define drill targets.

James Nelson, President of Spearmint Resources stated, "We are pleased to have completed the sampling portion of the phase I work program on our Escape Lake North PGM project in Ontario which has multiple fault lines running through the property in an area hosting world-class PGM deposits. Work is also continuing on our gold project in Quebec in the direct vicinity of Amex Exploration Inc. and Starr Peak Mining Ltd. and also expected to start shortly on our gold project directly bordering New Found Gold's Keats discovery (see Figure 2). We are well funded for these work programs with approximately $3.5 million in the treasury including flow-through funds which include an initial investment by certain funds managed by Sprott Asset Management LP. We will remain active on at least three projects within Canada and anticipate beginning a phase 3 drilling program on our flagship Clayton Valley Lithium project as well to further build upon our recently released resource estimate which included a total of 1,006,000 tonnes of Lithium Carbonate Equivalent (LCE)." 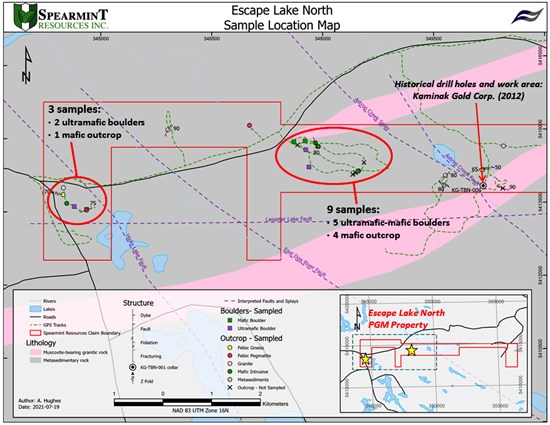 Dr. Scott Jobin-Bevans (P.Geo.), an independent consultant and Qualified Person as defined by National Instrument 43-101, has reviewed and approved the scientific and technical disclosure contained within this news release.

Additionally, the Company has granted ten million stock options at an exercise price of .16 cents to directors, officers and consultants of the company for a term of one year, pursuant to its rolling stock option plan.

Spearmint's other projects in British Columbia include the 'Safari' Copper-Gold Project consisting of 9,007 contiguous acres located in the northern Quesnel Trough in North-Central BC, and the 'Hammernose' Gold Project consisting of 8,685 acres directly bordering Westhaven Gold Corp.'s Shovelnose Property in the Spences Bridge Gold Belt located in Southern British Columbia, Canada. Management cautions that past results or discoveries on properties in proximity to Spearmint may not necessarily be indicative to the presence of mineralization on the Company's properties.

If you would like to be added to Spearmint's news distribution list, please send your email address to info@spearmintresources.ca

The CSE has not reviewed and does not accept responsibility for the adequacy or accuracy of the content of this release.

To view the source version of this press release, please visit https://www.newsfilecorp.com/release/90806