Newly-released Prophetic Revelation by a Former Pastor Titled, The Elijah Awakening: Calling Down the Fire in America

New York, New York--(Newsfile Corp. - October 11, 2021) - Donald A. "Donnie" Moss, former pastor, evangelist and police chaplain has published the prophetic revelation, "The Elijah Awakening: Calling Down the Fire in America (Elijah Awakening Press, 2021)". During his stint in ministry, Moss experienced occasions when God allowed him glimpses into the prophetic realm. It is through this explosive book that Moss now wants to share his most recent revelation with the world. 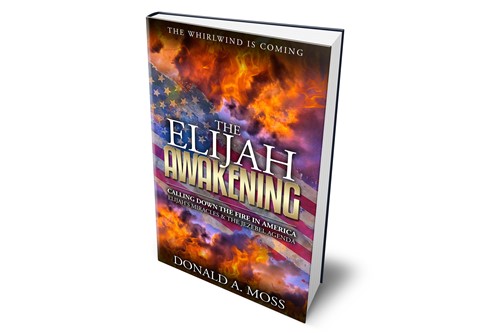 Book Cover of "The Elijah Awakening: Calling Down the Fire in America"

In The Elijah Awakening, the author delves into the supernatural realm and gives several predictions of America's future with a focus on the darkness and corruption that will destroy any country very quickly if left unchecked. The book further reveals a supernatural horror that lurks behind some of the events of 2020 and the changes God is about to make in America.

Positioned for American Christians, the book has been likened to being spiritual food for the spiritually hungry. While The Elijah Awakening will be of interest to individuals looking for spiritual prophecy, those who believe in the motto "Make America Great Again" should also consider picking it up.

Moss has stated in interviews: "The whirlwind is coming. When God decides to confirm His power, He is often very dramatic. As Elijah was delivered to heaven in a whirlwind with a chariot and horses of fire, the Elijah Awakening will explode across the heartland, in the spiritual fire and whirlwind of God. When the apostles were filled with the Holy Spirit in the Upper Room, this experience was characterized by "a sound from heaven as of a rushing mighty wind" and "tongues of fire" sat upon each of them. (Acts 2:2-4). The coming whirlwind explosion of Holy Ghost power in America will be more properly termed a "spiritual reformation," and it will not be neat, but it will be effective. Old ways of doing things in the church will be transformed into new ways orchestrated by God Himself."

The Elijah Awakening: Calling Down the Fire in America is available on Amazon and the author's website ElijahAwakening.com.

Donald A. "Donnie" Moss was raised in the Assemblies of God denomination, first ordained to the ministry in 1990 and ultimately credentialed by several Full-Gospel organizations for many years. He is an honors graduate of the University of Houston/Clear Lake, Oklahoma Bible College and Seminary and also attended the prestigious South Texas College of Law. He was a pastor, sworn police chaplain and traveled nationwide as a revivalist and gospel singer. He is the author of several books, including The Third Day: A Revelation of the Coming Revival (Writers Club Press 2002). He also wrote and recorded country music, of which several songs found their way into the Top 40 on independent country radio charts in the early 2000s.

To view the source version of this press release, please visit https://www.newsfilecorp.com/release/99213