Toronto, Ontario and Vancouver, British Columbia--(Newsfile Corp. - November 4, 2021) - Minera Alamos Inc. (TSXV: MAI) (the "Company" or "Minera Alamos")is pleased to report that it has made an initial delivery of gold doré from its Santana gold project ("Santana" or the "Project") in Sonora, Mexico. The gold was recovered from early material stacked on the Santana heap leach pad during the months of July and August (see news release dated September 8th, 2021) and intended primarily to commission the Company's carbon recovery plant and associated solution pumping systems in advance of ramping up daily mining operations. Leaching activities commenced at the end of August as the rainy season subsided and the results to date have confirmed the rapid gold extraction kinetics experienced during the heap leach test pad operations concluded in 2019.

"We are thrilled to have turned the corner to become a gold producer at our first mine in Mexico. It is truly a credit to the abilities of our technical group that we have managed to successfully complete this transition while dealing with all the challenges of the last 18 months as a result of the pandemic," stated Darren Koningen, CEO. "The results from early operations have confirmed those from previous test mining activities at Santana with rapid gold extractions and low reagent consumptions. If the current ramp-up trends continue we appear to be well on track to exceed our initial timing for achieving consistent net cash generation at the operation level."

"I am immensely proud of the execution by Darren and the rest of the team in Mexico in delivering this important event in the Company's development. The diligent work performed during extraordinary circumstances to build the Santana gold mine is a testament to them all," stated Doug Ramshaw, President. "We also couldn't have reached this point without the strong support of each and every shareholder of the Company whom have shown great patience with the advancement of the Santana gold mine and we look forward to continue to deliver exciting news to warrant the support we have received to date." 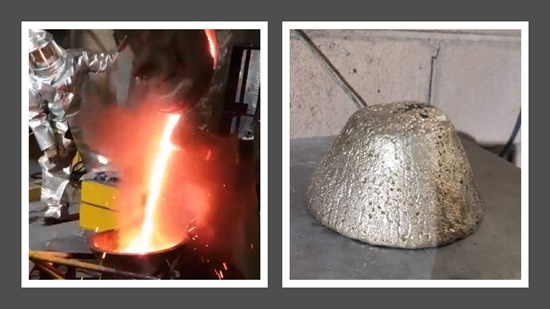 Approximately 400 oz of gold was contained in the doré poured from the first shipment of carbon sent off site to validate the operational and QA/QC procedures from the treatment facility being considered for future gold concentrate (carbon) processing. This material has been sent for final refining and sale. Further doré from subsequent deliveries will be announced in due course.

The area of mineralized material that is under active leaching continues to grow as the project ramp-up advances. For the announced doré production the majority of gold extraction came from leach pad areas 1 through 3 (with area 3 coming online in mid September) which contained an estimated 1050 ounces (from 41,000 tonnes). As of mid October, when the first carbon lots were removed for processing, approximately 600 ounces of gold had been recovered in the Company's processing facilities. Allowing for the normal delays between the initiation of leaching operations in new areas and the resulting discharge of solutions from the leach pad, this represents an overall extraction approaching 60% (roughly 75% of the +80% ultimate recoveries achieved during test pad operations in 2018/19) in an average of 30-40 days. The rapid kinetics closely match what was achieved during the previous test pad operations.

As part of the Company's commissioning activities six samples of mineralized material were also collected from different locations on the stacked leach pad area (prior to initiation of leaching) and sent to an external laboratory for gold recovery and reagent consumption analysis. When pulverized to less than 10 mesh and subjected to conventional bottle roll procedures (72 hours) the ultimate recoveries generally ranged from the low to high 90s (percent) with the majority of gold extraction occurring in the first 12 hours. Lime and cyanide consumptions were low (<0.5 kg/t) and once again in line with those achieved during the previous Santana test leaching activities.

In general, the overall ramp-up in mining activities at the Santana project site continue to advance as expected. As occurs normally during a start-up scenario it is expected that some variability in production metrics will continue for some time to come until the operations begin to stabilize.

Despite some fleet optimization and maintenance activities early in the month, the total material mined for the month of October approached 200,000 tonnes which was close to double the production rates achieved in the prior month. Late in the month mine production rates approached initial design start-up levels on multiple days and efforts continue to maintain these levels on a consistent basis during the remaining ramp up phase.

Withsubstantially more than 50% of the mineralized material, stacked on the leach pad to date now under active leaching for gold extraction this percentage has grown steadily. As the area under leach has expanded the gold concentration in the feed to the plant has continued to rise in parallel with the increase in flow rates coming from the leach pad. Gold content in the pregnant leach solution pond (feed to the carbon recovery plant) has risen steadily from a range of 0.2 and 0.3 ppm in September as the new gold solution flows started accumulating in the pond (contained dilution water from the end of the rainy season) to in excess of 0.8 ppm in the second half of October. At the same time the process plant solution throughput has also steadily increased from an average of 1400-1500 m3 per day over the month of September to in excess of 3000 m3 per day on occasions later in October.

As the mining operations at the Nicho Norte starter pit continue to ramp-up the Company has continued planning for the eventual start of mining activities at the Nicho Main Zone. Ultimately the ability to source mineralized material from multiple locations will facilitate more optimal mine production scheduling and ultimately allow the Company to expand production rates beyond our initial targets.

The Company made its production decision and has started the development and production of the Santana gold mine without having completed a feasibility study demonstrating economic and technical viability. As such, there may be increased uncertainty of achieving planned production levels, estimated recovery of gold, the costs associated with such recovery, including increased risks associated with developing a commercially mineable deposit. Historically, such projects have a much higher risk of economic and technical failure. Failure to commence production would have a material adverse impact on the Company's ability to generate revenue and cash flow to fund operations.

Minera Alamos is a gold production and development company. The Company has a portfolio of high-quality Mexican assets, including the 100%-owned Santana open-pit, heap-leach mine in Sonora that is currently going through its operational ramp up. The newly acquired 100%-owned Cerro de Oro oxide gold project in northern Zacatecas that has considerable past drilling and metallurgical work completed and could enter the permitting process rapidly. The La Fortuna open pit gold project in Durango (100%-owned) has an extremely robust and positive preliminary economic assessment (PEA) completed and the main Federal permits in hand. Minera Alamos is built around its operating team that together brought 3 mines into production in Mexico over the last 13 years.

The Company's strategy is to develop very low capex assets while expanding the projects' resources and continuing to pursue complementary strategic acquisitions.

The Company does not have a feasibility study of mineral reserves, demonstrating economic and technical viability for the Santana project, and, as a result, there may be an increased uncertainty of achieving any particular level of recovery of minerals or the cost of such recovery, including increased risks associated with developing a commercially mineable deposit. Historically, such projects have a much higher risk of economic and technical failure. Failure to commence production would have a material adverse impact on the Company's ability to generate revenue and cash flow to fund operations.

To view the source version of this press release, please visit https://www.newsfilecorp.com/release/101993