Vancouver, British Columbia--(Newsfile Corp. - November 19, 2021) - Visionary Gold Corp. ("Visionary" or the "Company") (TSXV: VIZ) is pleased to announce that it has completed five drill holes for a total of 780 metres (m) of drilling at the Wolf Gold Project, and has confirmed and extended a gold-in-soil anomaly, just a few hundred meters north of the historic Wolf Mine, on an interpreted parallel structure called Windy Hill.

Thus far, the 2021 exploration program on the Wolf Gold Project has achieved the following:

"Strong gold values in soil and rock chip samples complimented by associated geophysical anomalies continue to highlight potential for a large gold bearing system at the Wolf, as we await results from the initial drill program," stated Visionary CEO, Wes Adams. "Like many of our peers, we have experienced significant delays this year in returning assay results, but we haven't stopped collecting data and the results that we have received continue to be encouraging. We will release the results from the entire drill program as soon as we have results from all holes, and we will continue to release results from regional exploration efforts as they become available."

Confirmation rock channel samples across the Wolf Shear were taken at different sample locations along the same structure and returned results almost identical to previously reported channel samples with an average of 10.2 m of 5.19 g/t gold (SeeNR dated February 3rd, 2021), as compared with the new samples, which returned an average of 5.12 g/t goldover 11.5m. Rock chip samples in other areas of the Wolf Gold Project seem to correlate well with surface gold in soil anomalies and structural features mapped at surface. See attached map (Figure 1)and table (Table 1)below. 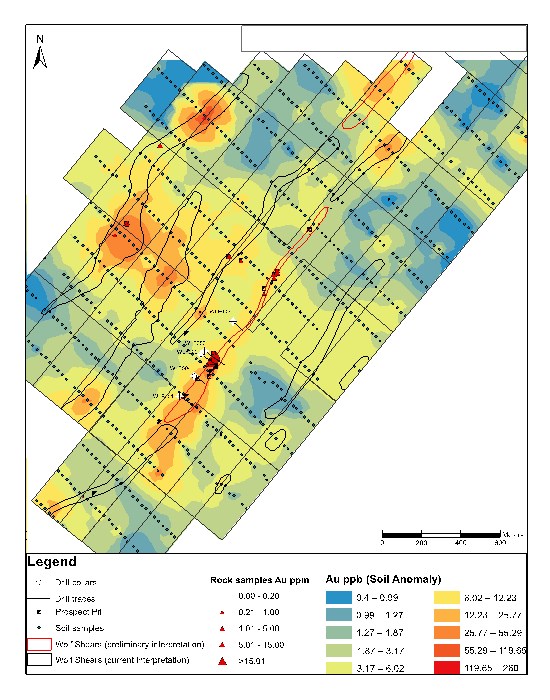 Soil sample QA/QC included the insertion into the sample stream of standards, duplicates, and blanks. Samples were kept at Visionary's secure facility until freighted directly to ALS Geochemistry's preparation laboratory in Elko, Nevada. Soil samples were analyzed using package AuME-ST43 with a detection limit for gold of 0.0001ppm. Rock samples were analyzed by crushing and pulverizing 250g to >85% passing 70 microns, final analysis is by 30g fire assay (Au-ICP21).

For further information, please visit the company website at: www.visionarygoldcorp.com

All scientific and technical information contained within this press release was prepared under the supervision of Darren Lindsay, P.Geo. (EGBC), a Qualified Person as defined by NI 43-101. Mr. Lindsay is a Director of the Company.

This news release contains "forward-looking statements" within the meaning of Canadian securities legislation. These include, without limitation, statements with respect to analysis of core samples and other results from Visionary's 2021 exploration program and further updates regarding drilling and exploration progress in the coming weeks. Forward-looking statements are necessarily based on several estimates and assumptions that, while considered reasonable, are subject to known and unknown risks, uncertainties and other factors which may cause actual results and future events to differ materially from those expressed or implied by such forward-looking statements. Such factors include, but are not limited to general business, economic and regulatory risks; capital and operating costs varying significantly from management estimates; timing of the provision of services by third parties; delays in obtaining or failures to obtain required governmental, environmental or other project approvals; uncertainties relating to the availability and costs of financing needed in the future; inflation; fluctuations in commodity prices; delays in the development of projects; and the other risks involved in the mineral exploration and development industry generally. Although the Company believes that the assumptions and factors used in preparing the forward-looking statements are reasonable, undue reliance should not be placed on these statements, which only apply as of the date of this news release, and no assurance can be given that such events will occur in the disclosed time frames or at all. Except where required by law, the Company disclaims any intention or obligation to update or revise any forward-looking statement, whether because of new information, future events, or otherwise.

To view the source version of this press release, please visit https://www.newsfilecorp.com/release/104291