New York, New York--(Newsfile Corp. - November 28, 2021) - "Cell Battle", a chain game modified form "Chongding Dahui" invested by Wang Sicong will be launched on december 10 ("Chongding Dahui" is a puzzle quiz game). It is reported that "Cell Battle" has completed millions of dollars in fundraising. The investors are: Triancap, which is branch company of who has top-level cashability through internet traffic, a game publishing platform named OpenSky, Game Association PTE, a well-known investment institution ChainXX, and an angel investor, a well-known wallet founder liu Etc. The background of this project is strong, and the release of this game will be exclusively undertaken by OpenSky.

The theme of "Cell Battle" comes from the phenomenon-level product "Topping Conference" invested by Wang Sicong in 2018. The creation team of "Cell Battle" is the team of "King of the Mind" which had 28 million daily active users in 2018, and now they modified the mode of Chongding Dahui to block chain game.

Before the game starts, users use BNB to buy a brain cell pet (each brain cell is an NFT), and then they can participate in the game to win peak tokens. There are two play patterns as shown below: 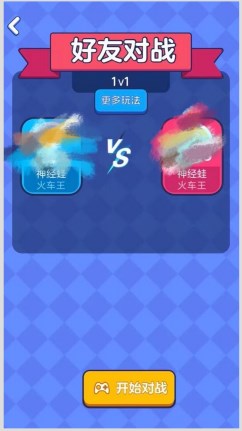 Match opponents by invitation or system assigned, then answer 5 questions to win a single game.

The winner will be rewarded with peak tokens 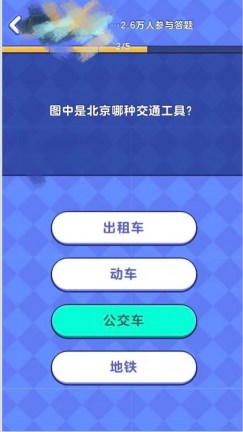 Every night at 9:00,all players participate in the "topping conference" and jointly answer 12 questions.

The winner will share the rewards equally which consists of :1000 usdt+10 million peak+tokens from other sponsors.

Because of the summit meeting, the game's daily return rate ranges from 4% to 1000%.The low threshold and high return model makes "Cell Battle" a blockchain game that everyone can participate in.

The token model of "Cell Battle" comes from the phenomenon-level product Axie, and users can earn peak coins (limited to 20 times a day) by playing the battle game.

The user's brain cell pet can split new cells through peak+cell coins, and the new cells can still compete and participate in the summit meeting 20 times a day.

cell coins: total circulation of 2.7 billion, and will never be issued more. 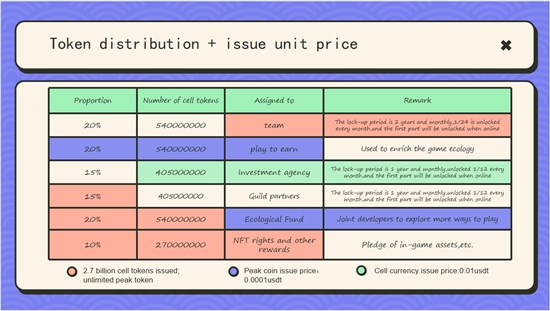 "Cell Battle" adopts the cooperation model of 233 guilds around the world, and the number of guilds will never increase. Users can become a member of brain cell guild, and can learn about one of the 12 questions in the "Chongding Dahui" 3 minutes in advance, so as to closely integrate the relationship between the members of the guild. At the same time, users can also set up a small Chongding Dahui that charges peak coins as tickets in the game. The specific mode is:

Below issues are decided by game guild:

*The number of peaks required for the ticket

*Starting time of the Chongding Dahui (once a day)

*What percentage of the ticket revenue will be used as the prize for the Chongding Dahui.

In the first phase of recruiting guild leaders, users can enter the official website: www.cellbattle.io, and click to become the guild leader.

After half a year of intensive development, "Cell Battle" is expected to be launched first in Chinese, and the English version on December 10, 2021, and will be launched in more languages as soon as possible, and gradually developing in East Asia, Southeast Asia, North America, South America and other global markets.

In terms of marketing, they will host a TV show similar to Who Wants to Be a Millionaire together with traditional American answering companies.

The model of answering questions to make money has a huge audience all over the world. From the Oscar-winning "Millionaire in the Slum" to the well-known "Chongding Dahui", the "Cell Battle" model of earning wealth through knowledge is bound to attract numerous users around the world and become a phenomenon-level block chain game.

To view the source version of this press release, please visit https://www.newsfilecorp.com/release/105402

Sponsored
Also read
From Ms. Marvel to The Dropout: a genre-based 2022 TV watchlist
Kenyan girl defies all odds to make it big at US medical firm
Novak Djokovic será deportado y no jugará el Abierto de Australia
Why all eyes are on Mudavadi as Ruto, Raila battle for State House
They are over 70 years, they are in charge and they are here to stay
BBI could still haunt politicians ahead of polls
Обвиняемый в мошенничестве при строительстве двух многоквартирных домов в Новороссийске предстанет перед судом
Novak Djokovic loses chance to defend Australian Open title as court upholds deportation