How do air suspensions work in modern cars? 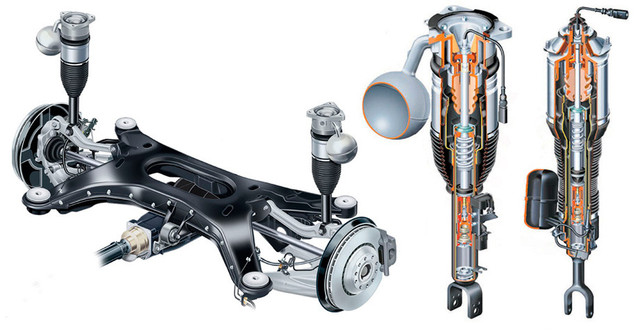 Their advantages and disadvantages
If the cars were not equipped with suspension, each, even if quite a short trip, would turn into a real torture. At the slightest bump, all the bones of the driver and passenger would shake, and the head would try to fall off from the neck. The suspension not only supports the weight of the car, but also controls all its movements, leveling the imperfections of the road, smoothing out holes and potholes. The standard mechanism supports the vehicle on steel or composite springs, but perhaps air could perform this task better?

Air suspension: how does it work?

In the pneumatic system, the springs and springs are replaced by cylinders made of rubberized material, into which air is pumped. The vehicle's electronic system controls the amount of gas in each tank, thus adjusting the ground clearance. With the help of additional elements, such as receivers, pump and pipeline, the air pressure is controlled, which helps to achieve optimal ride quality in various conditions.

The idea of using such mechanisms is not new – the first prototype of the suspension appeared at the beginning of the 20th century, but they have been widely used recently. Like any system, air suspension has its pros and cons.

The main advantage of this mechanism is easy adjustment. The ground clearance can be changed in just seconds, which allows you to perfectly cope with a variety of tasks.
First, the car gets a greater cross-country ability, the ability to rise above the ground, does not allow the car to get stuck in impassable mud or on a hummock, protects the bottom from damage.

On the other hand, reducing the clearance also has its advantages. The first is convenience. Those who climb into the cab of their SUV every day are well aware that this process is not very convenient. Especially if the driver or passenger is not tall enough, or has injured his leg, or has a sore back. The list goes on and on. When the car can descend elegantly, preparing to take passengers on board, it is very convenient.

The ability to snuggle up to the road also saves a lot of fuel and improves the aerodynamics of the vehicle. The air suspension works perfectly in conjunction with the forecasting system. Such a tandem is usually called adaptive suspension. With the help of sensors, the car evaluates the quality of the roadbed and other characteristics of the route, which allows you to change the vertical position of the wheels and minimize the damage from shaking.

Disadvantages of air suspension:
The main disadvantage of the system is its high cost. Since the creation of a pneumatic, and even more so, adaptive suspension requires the addition of components, many of which are high-tech, the cost of a model equipped with it increases. For example, a Volvo XC90 with a similar upgrade will cost $ 1,800 more.

The main element involved in the creation of air cylinders is rubberized material. It wears out much faster than springs made of steel or composite materials. So when buying a used car equipped with air suspension, it is the condition of these parts that you should pay attention to. Replacing worn parts can cost thousands of dollars.
While the air suspension is wonderful and very pleasant, but still a luxury!