By Typing Captcha, you are Actually Helping AI's Training

NEW YORK, NY / ACCESSWIRE / November 27, 2020 / Living in the Internet age, how occasionally have you come across the tricky CAPTCHA tests while entering a password or filling a form to prove that you're fully human? For example, typing the letters and numbers of a warped image, rotating objects to certain angles or moving puzzle pieces into position.

What isCAPTCHA and how does it work?

CAPTCHA is also known as Completely Automated Public Turing Test to filter out the overwhelming armies of spambots. Researchers at Carnegie Mellon University developed CAPTCHA in the early 2000s. Initially, the program displayed some garbled, warped, or distorted text that a computer could not read, but a human can. Users were requested to type the text in a box, and have access to the websites.

The program has achieved wild success. CAPTCHA has grown into a ubiquitous part of the internet user experience. Websites need CAPTCHAs to prevent the "bots" of spammers and other computer underworld types. "Anybody can write a program to sign up for millions of accounts, and the idea was to prevent that," said Luis von Ahn, a pioneer of early CAPTCHA team and founder of Google's reCAPTCHA, one of the biggest CAPTCHA services. The little puzzles work because computers are not as good as humans at reading distorted text. Google says that people are solving 200 million CAPTCHAs a day.

Over the past years, Google's reCAPTCHA button saying "I'm not a robot" was followed more complicated scenarios, such as selecting all the traffic lights, crosswalks, and buses in an image grid. Soon the images have turned increasingly obscured to stay ahead of improving optical character recognition programs in the arms race with bot makers and spammers. 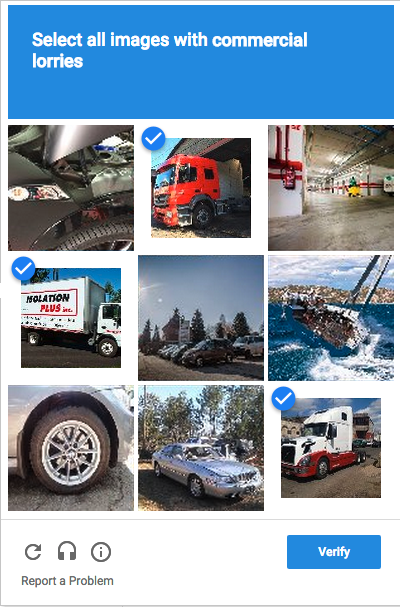 While used mostly for security reasons, CAPTCHAs also serve as a benchmark task for artificial intelligence technologies. According to CAPTCHA: using hard AI problems for securityby Ahn, Blum and Langford, "any program that has high success over a captcha can be used to solve a hard, unsolved Artificial Intelligence (AI) problem. CAPTCHAs have many applications."

From 2011, reCAPTCHA has digitized the entire Google Books archive and 13million articles from New York Times catalog, dating back to 1851. After finishing the task, it started to select snippets of photos from Google Street View in 2012. It made users recognize door numbers, other signs and symbols. From 2014, the system started training its Artificial Intelligence (AI) engines.

The warped characters users identify and fill in for reCaptcha are for a bigger purpose, as they have unknowingly transcribed texts for Google. It shows the same content to several users across the world and automatically verifies if a word has been transcribed correctly by comparing the results. Clicks on the blurry images can also help identify objects that computing systems fail to manage, and in this process Internet users are actually sorting and clarifying images to train Google's AI engine.

Through such mechanisms, Google has been able to help users back in recognizing images, giving better Google search results, and Google Maps result.

In the face of AI blue ocean, a large number of data providers have poured in.ByteBridge.io has made a breakthrough with its automated data labeling platform in order to empower data scientists and AI companies in an effective way.

With a completely automated data service system, ByteBridge.io has developed a mature and transparent workflow. In ByteBridge's dashboard, developers can create the project by themselves, check the ongoing process simultaneously on a pay-per-task model with clear estimated time and price.

As a rare and precious social resource, data needs to be collected, cleaned and labeled before it grows into valuable goods. ByteBridge.io has realized the magic power of data and aimed at providing the best data labeling service to accelerate the development of AI.