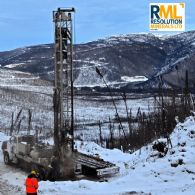 Resolution Minerals Ltd (ASX:RML) is pleased to announce that it has selected Ruen Drilling via our project partner Millrock Resources (CVE:MRO), to commence drilling in early March on the compelling Aurora targets (Alaska) via a road based program. The maiden program will test the eastern Aurora Targets close to the claim boundary with Northern Star (ASX:NST) - Figure 1*. These drill targets have significant geophysical characteristics in both the magnetic and CSAMT signatures to NST's Goodpaster Discovery and the Pogo Gold Mine itself.

- Ruen Drilling is the surface drill contractor for neighbours Northern Star Resources Limited (ASX:NST) Pogo Gold Mine, and has an excellent reputation for safety, production and local knowledge

- Resolution is continuing to assess the regional prospectivity and build a pipeline of drill ready prospects across a large 660km2 land package, in parallel with its aggressive drilling program at West Pogo

- Resolution recently completed a capital raise of $4.5 million with extremely strong demand from institutional and sophisticated investors, by way of placement at a price of 5c per share

The 64North Project is adjacent to Northern Star's (ASX:NST) Pogo Gold Mine, 120km from Fairbanks, Alaska in the Tintina Gold Province. NST's world class high grade Pogo Gold Mine has an endowment of 10M oz of gold and started production in 2006, producing approximately ~300,000 oz / year at over 13g/t Au through this time. Recent discovery success announced by NST within 450m of our tenement boundary and open in all directions at the Goodpaster discovery demonstrates the highly prospective nature of the district and the immediate Aurora drill targets on RML's tenements.

"Our immediate aim is to drill test for Pogo Style mineralisation on a series of look-a-like size and geophysical features to NST's Goodpaster Discovery and Pogo Gold Mine.

"We are pleased to have secured Ruen Drilling for our maiden drilling program given their local experience of drilling conditions from neighbours Northern Star's Goodpaster Discovery."