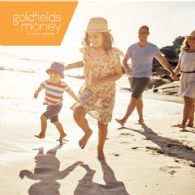 The Company is also pleased to provide an update in relation to the proposed merger between the Company and Finsure ("Finsure Transaction"), including the receipt of Financial Sector (Shareholdings) Act ("FSSA") approval from the Federal Treasurer, the anticipated transaction timetable and the remaining conditions precedent.

Goldfields Money experienced continued growth during the 3 months ended 31 March 2018 with loan settlements for the period of ~$17 million (with 96 individual loans settled), with year to date loan settlements and volumes the highest on record. As at 31 March 2018 Goldfields Money's total loan book grew to ~$213 million (compared to ~$201 million as at 31 December 2017).

After accounting for one-off costs incurred in responding to the Firstmac takeover offer and progressing the Finsure Transaction, pleasingly Goldfields Money expects to report an underlying profit for the financial year ending 30 June 2018.

The charts below summarise the performance of Goldfields Money over the last five years(see link below).

Finsure continued to grow from strength to strength during the 3 months ended 31 March 2018 with the total loan book at the end of the period growing to ~$31.8 billion, loan settlements during the period reaching ~$2.8 billion (with over ~6,600 individual loans settled), cash revenue of ~$107 million generated during the period and its broker network growing to more than 1,400 loan writers.

Finsure's total historical book size and total loan writer network numbers as at 31 March 2017 were the highest on record.

The charts below summarise the continued growth of Finsure over the last five years(see link below).

The Board remains confident of satisfying all remaining conditions precedent for completion of the Finsure Transaction. The table below shows the currently anticipated transaction timetable.

On 1 June 2018, FSSA approval was received from the Federal Treasurer in satisfaction of another condition of the Finsure Transaction. The approval is subject to the Company raising at least $20 million in Common Equity Tier 1 Capital, of which ~$4.7 million was raised in April 2018 from international and local institutional investors, and sophisticated investors by way of a placement of new fully paid ordinary shares.

The Company expects to raise at least ~$15.3 million in additional capital as part of the Finsure Transaction to ensure that the merged group maintains sufficient regulatory capital requirements and to fund additional lending growth.

Further to the Company's announcement of 15 January 2018, completion of the Finsure Transaction is subject to the satisfaction (or waiver, if applicable) of the remaining conditions:

- ASX and ASIC review of the Explanatory Memorandum

All other conditions to allow completion of the Finsure Transaction have now been satisfied, with the remaining conditions considered largely procedural in nature with the exception of Goldfields Money shareholder approvals.

Goldfields Money and Finsure have agreed to extend the date by which the remaining conditions are to be satisfied or waived (where applicable) to 31 July 2018.

Goldfields Money and Finsure continue to work towards satisfaction of the remaining conditions of the Finsure Transaction and a further update will be provided as progress is made.


News Provided by ABN Newswire
Read More..
The news, reports, views and opinions of authors (or source) expressed are their own and do not necessarily represent the views of CRWE World.