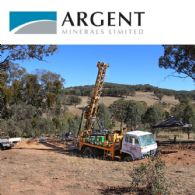 Argent Minerals Limited (ASX:ARD), (Argent, or the Company) is pleased to report a significant upward revision to the Kempfield Exploration Target estimate, which the Company believes opens up a new potential development scenario as a large scale zinc-silver-lead-gold project.

The Company has revised Exploration Target estimate for additional mineralisation potential to:

The substantial Exploration Target revision is a direct result of the successful separation of the primary feed material into potentially marketable commercial grade zinc and lead concentrates, which also contain silver and gold.

The Exploration Target has been re-estimated to incorporate the impact of the metallurgical breakthroughs and updated market pricing on the basis of the new contained metals equivalence formula and primary material cut-off grade announced on 30 May 2018.

The following map (see link below) illustrates the new potential development scale of the Kempfield project in the context of the immediate large scale mining growth neighbourhood and the underlying highly prospective geology that hosts some of the largest mining projects in Australia.

Argent has recently completed a reassessment of the planned drilling programmes in view of the commercial impact of the recent metallurgical breakthroughs and current metals pricing.

The Company has revised the initial drill programme and is currently expediting Stage 1 from planning through to execution. In addition to hole design, the process has required field checking of hole collar positions and detailed environmental impact assessment, as well as the management of land access matters related to drilling planned outside Argent's freehold land.

The finalised regulatory document will be submitted shortly to the NSW Government Department of Planning and Environment for approval.

The drilling programme schedule has been revised as follows:

- Stage 2 - Resource category drilling. Further resource infill drilling will be conducted to a level sufficient to estimate an additional mineral resource, if any, initially to Inferred category (contingent on satisfactory results from Stage 1). Stage 2 timing is envisaged to be completed during CY 2019(see Note below). Further infill drilling may be conducted by the Company in order to estimate Indicated and Measured categories ahead of potential Ore Reserve assessments, subject to the results of this stage, including a reassessment of the project economics.

Note: The indicated timings are subject to the completion of heritage surveys where applicable, the timely finalisation of land access matters, the completion of regulatory approvals and statutory notice periods, weather, as well as all and any other operational factors that could affect the ability of the Company to perform drilling.

Further details are provided in the following appendices of this announcement (see link below):