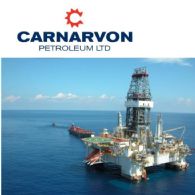 Carnarvon Petroleum ("Carnarvon" or "the company") (ASX:CVN) (OTCMKTS:CVONF) is pleased to provide shareholders with this update on projects and progress.

The Company recently completed a $20 million capital raising (placement and SPP). The raising strengthened the Company's total cash position to $65 million. The funds were raised to enable the Company to pursue drilling of the Buffalo-10 well with the maximum equity possible and to progress activity across other Carnarvon permits.

- Carnarvon carefully assessed farming out Buffalo project equity and determined the small capital raising was the most value accretive over the longer term;

- The raise was timed to leverage news flow as an investment catalyst;

The Buffalo project is a high value, low risk and low cost asset. It is a rare opportunity that is ideally suited to Carnarvon at its current stage and size.

- There are a number of options to develop and fund the project which adds to its appeal;

- The Company's recent capital raising de-risks the well cost funding and gives the Company far more certainty in terms of controlling the future of this project;

- It also ensures the Company's ability to leverage the best commercial outcomes on the project;

- Current plans are to drill the well in 2019 then move to oil production around 18 to 30 months later (timing dependent on factors such as approvals and rig availability);

- On current resource estimates (2C of 31 mmbls) and oil prices, the project is material to Carnarvon shareholders. The project would generate over US$2.3 billion in revenue and with an expected development cost of less than $150 million and a simple low cost floating production system, the project is expected to have a very high profit margin;

Carnarvon is also progressing another significant, organically generated project that is nearing commercial validation. Having successfully proved the existence of a working petroleum system from the first four wells, the current two Phoenix project wells are seeking to confirm commerciality.

- Positive well results in either the Phoenix South-3 or Dorado-1 wells that are drilling now will provide Carnarvon with numerous commercialisation options, including reducing equity in the project to reallocate the funds to other project opportunities, such as the Buffalo project, in order to generate greater value for shareholders;

- This is a rare strategic asset given its volume potential, dual income stream source in gas and oil, and location in shallow water of around 100 metres;

- Also appealing is the close proximity of the asset to the mining town of Port Hedland approximately 150km away, with resident gas pipeline infrastructure;

- WA is forecast to have a gas shortfall around the time Phoenix is predicted to come into production, making the project especially appealing to oil and gas companies and industry.

More broadly, Carnarvon has been one of the most active exploration companies on the North West Shelf during the industry down turn that commenced in 2014:

- Five successful wells being drilled, including a significant flow test from the Roc-2 well;

- 3D and 2D seismic acquired over the 22,000 square kilometre Phoenix project acreage; and

These counter cyclical initiatives mean Carnarvon benefited from the low cost and low competitive environment and now has a broad portfolio of assets that it will seek to create value from as industry sentiment strengthens on recently improving oil prices.

Carnarvon CEO, Adrian Cook said the company's model of "taking ideas to value" was now well proven with pleasing progress on both the Buffalo and Phoenix projects.

"During the down cycle in the oil price, Carnarvon focused on actively acquiring new projects," Mr Cook said.

"We are now progressing those and while Phoenix and Buffalo remain our near term focus, the next levels of project value are already being matured."

Mr Cook said the immediate focus was to progress Carnarvon's assets towards the most positive commercial outcomes.

"We are working with all relevant stakeholders to ensure efficient and expedient progress," he said.

"The Company looks forward to providing shareholders with more positive news in the coming months."

Carnarvon was awarded the WA-523-P acreage in May 2016 for an initial six-year term which included the previously developed Buffalo field. The Field was discovered by BHP in 1996 and subsequently developed using four wells drilled from a small, unmanned wellhead platform installed in 25 metres water depth, tied back to an FPSO. Production commenced in December 1999 at production rates up to approximately 50,000stb/d and terminated in November 2004 after the production of 20.5MMstb of highly-undersaturated, light oil (53degAPI) from the Jurassic-age Elang Formation. All existing facilities and wells were decommissioned and removed prior to Carnarvon being awarded the block.