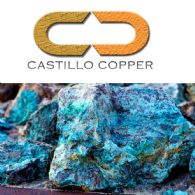 What else do we know about Cangai? With the exception of a period during the 1980s when major miners WMC and CRA (Rio Tinto) undertook limited exploration, since its closure a century ago, the site has remained largely unexplored - despite the excellent surrounding infrastructure, a skilled workforce within driving distance (just an hour by road from Grafton) and, most importantly, significant copper mineralisation clearly visible around the old workings (refer to virtual site trip video).

Is there other potential at Cangai? The Smelter Creek stockpiles are about one kilometre from Cangai. Given the exceptional high grade historical ore processed at this site and the poor metallurgical technology available at that time, it's likely significant mineralisation remains. Castillo has announced an initial 4 hole drill program at Smelter Creek whilst they have also had a number of enquiries from prospective off-take partners.

Valuation catalysts: the company will release a number of key announcements in the second half of this year, including the following.

Analyst comments: given the clear evidence of copper mineralisation around the historical Cangai mine site, as well as its proximity to world-class infrastructure and a skilled workforce, it's surprising the project has remained idle for so long. However, with an aggressive 39 drill-hole program exploration program to commence shortly, Castillo is looking to quickly change this.

Unlike the initial program, which targeted deep mineralisation, this one is focusing on the shallower supergene material surrounding the historical workings. We believe this, as well as the use of smaller drill rigs better suited to the surrounding terrain, is likely to produce improved exploration results in comparisons to the first exploration program. Assuming exploration success, a resource upgrade at Cangai is likely in the near future.

In addition to Cangai, drilling will also take place at the Smelter Creek stockpiles. We were impressed by the potential there (as discussed above) and believe the results of this program may surprise on the upside. Longer term, the potential of the stockpiles will however be determined by the metallurgical testwork which is due to commence shortly after drilling.

In addition to Cangai/Smelter Creek, Castillo's Broken Hill cobalt project holds significant blue sky potential for shareholders. Given their neighbours COB recent announcement a strategic partnership with LG International (one of the world's largest lithium-ion battery makers), this alone we believe should add value to Castillo's long-term share price, particularly as work ramps up in the near future.