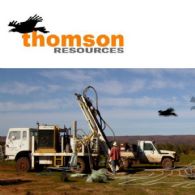 Planning is underway for follow-up work at the Harry Smith Gold Project where differential GPS surveys taken during the last program has allowed location of historic soil geochemical data. Around 1,100 samples were collected in 1994-95 and assayed from four prospects.

The samples were taken from around 30cm depth after the top 10-20cm were removed (due to potential deposition of windblown sand and dust). All samples were collected on local grids and have now been updated to the Map Grid of Australia using geo-referencing with the aid of DGPS data and aerial photography. Results have been described in Annual Exploration Reports to the NSW Geological Survey (available online under EL 3947).

The data at Harry Smith shows extensive gold-in-soil anomalism, concentrated in two 500m long trends that coalesce in the area of the small Harry Smith open-cut. Several other anomalies are present, notably to the south and north, which are untested. Thomson Resources drilling in March 2018 (ASX release March 26, 2018) was concentrated on just one branch of the anomaly stretching between the old Harry Smith and Golden Spray workings (see Figure 1 in link below). The next drill round will continue exploring on this trend as well as testing the Silver Spray lode as a priority target.

Five kilometres to the southeast soil samples were collected over two lines of historic workings at Gladstone and Old Belmore. The soil assays showed a strong anomaly along both lines, with a second line developed to the northeast at Gladstone. The anomaly levels are more subdued than at Harry Smith, possibly due to deeper soil cover, but are still 5-10 times background. Collectively the soil anomalies extend for 1.5km and are open along strike both northwest and southeast. No drill testing is recorded in historic files or reports.

Both the Harry Smith and Gladstone-Old Belmore gold prospects appear to be related to the Grong Grong granite intrusion which lies to the south (see Figures 3 and 4 in link below). This association is the basis for the Intrusion-Related Gold targeting in the area undertaken by previous explorers (see ASX release of 5 December 2013 by Carpentaria Exploration - ASX:CAP). Typically, IRG deposits would be hosted as sheeted vein systems close to or in the roof zone of fertile granites, which matches closely the position of the current prospects (see Figures 3 and 4 in link below).

The Silurian age Grong Grong granite is magnetically quiet (blue colour on Figures 3 and 4 (see link below) represents low magnetism) and intrudes magnetic metasediments (the Ordovician Wagga Metamorphics: yellow to red colours). In detail, the Harry Smith and Gladstone-Old Belmore gold prospects appear to reside on magnetic highs running sub-parallel to the interpreted granite boundary, about 500m to 1km north of it (see Figure 4 in link below). This magnetic feature is disrupted by multiple NE-SW "faults" resulting in a jagged pattern.

Clearly there is potential to discover other gold systems in similar positions to those already known and a program covering follow-up drilling at Harry Smith and more regional exploration is being finalised.

Planning is also well advanced for the next stage of drilling at the Bygoo Tin project which will seek to extend and define the new discoveries at Bygoo North, South and Bald Hill. Drilling is expected to commence in the next quarter.

The Bygoo Tin Project was acquired by Thomson Resources in 2015 and lies on the 100% owned EL 8260. The EL surrounds the major tin deposit at Ardlethan which was mined until 1986, with over 31,500 tonnes of tin being produced (reference Paterson, R.G., 1990, Ardlethan tin deposits in the Australasian Institute of Mining and Metallurgy Monograph no. 14, pages 1357-1364). There are several early-twentieth century shallow tin workings scattered up to 10km north and south of Ardlethan, and few have been tested with modern exploration. Thomson has had immediate success in drilling near three of the historic workings, Bygoo North, South and Bald Hill.

As announced to the ASX on 21 November 2016, Riverston Tin PL (a wholly owned subsidiary of Thomson) signed a Farm-in and Joint Venture Agreement for its Bygoo Tin Project with a Canadian investor (BeiSur OstBarat Agency Ltd). Bei Sur (or nominee) can earn a 51% interest by contributing $A3 million in staged payments by 30 June 2018. Bei Sur then has an option to contribute additional $A22 million to earn a further 25% interest, which is exercisable until 1 October, 2018. This arrangement is now amended as described above in the body of the current release.