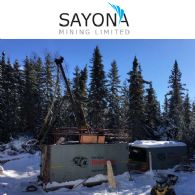 Sayona Mining Limited (ASX:SYA) (OTCMKTS:DMNXF) ("Sayona" or the "Company") is pleased to report the commencement of a testing program to produce lithium carbonate and lithium hydroxide from the Authier pilot plant lithium concentrate.

The Company recently completed a pilot plant program which processed five tonnes of Authier drill core into over 400 kilograms of spodumene concentrate. The program demonstrated that a 6% Li20 concentrate could be produced at a metallurgical recovery of 79% (see ASX release, Completion of the Authier Pilot Program, 22 May 2018).

The downstream testing program will be performed by SGS Canada Inc. at Lakefield, Ontario. SGS have extensive experience and expertise in downstream testing and have performed programs for a number of Canadian lithium projects. The program will be comprised of two phases including the initial production of aqueous lithium sulphate followed by purification to lithium carbonate and lithium hydroxide.

Data produced from the testing program will be incorporated into a downstream Pre- Feasibility Study and samples produced will be used for potential customers.

The Company has previously demonstrated the successful conversion of Authier concentrate into extractable beta spodumene (a form of spodumene amenable to further processing). Flotation concentrate samples were transformed from alpha to beta spodumene in a decrepitation kiln. The lithium was extracted to form lithium sulphate through sulphuric acid roasting followed by water leaching. The previous results demonstrated that up to 96.8% of the lithium was extractable from Authier spodumene concentrates (see ASX release, Successful Thermal Conversion of Authier Concentrates, 3 July 2017).

The results compare favourably with benchmark data generated from other hard-rock spodumene projects in Canada with similar testing conditions (i.e., decrepitation temperature and time). The results provided confidence that battery grade lithium carbonate can be produced from Authier lithium concentrate.

Dan O'Neill, Managing Director, commented "The new testing program heralds an exciting new phase of value adding at the Authier project. In the short term, the Company is committed to developing a low capital expenditure concentrate sales operation and capitalising on the projected high price environment for concentrates near term. The cash flows could then be applied to funding the equity required to construct the downstream processing plant. This would unlock the inherent value in the project at a time when lithium carbonate/hydroxide prices are trading near at all time price highs based on the strong demand growth for lithium-ion batteries".

The Company believes that there is significant economic rationale for value-adding the Authier concentrates in Quebec to enhance the project value, and improve the long-term competitive position of the project. In August 2017, a Concept Study prepared by engineering consultants, Wave International ("Wave"), demonstrated the potential technical and economic viability of constructing a lithium carbonate and/or hydroxide facility in Quebec - see Table 1 (see link below).

Quebec is uniquely positioned with a number of significant commercial and market advantages, including:

- Tax incentives for value-adding the concentrates within Quebec;

- Located in close proximity to the US markets including, the Tesla Giga factory in Nevada, and other planned Giga factories in the United States.

Sponsored
Also read
Prosafe SE: Safe Boreas to provide accommodation support at Buzzard
Indo-Pakistan ceasefire along LoC will have no bearing on counter-terrorism operations in JK: Army
Pakistan ready to resolve all outstanding issues through dialogue with India: Imran Khan