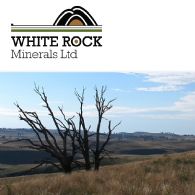 White Rock Minerals Ltd (ASX:WRM) ("White Rock" or the "Company") is pleased to announce the first round of assay results for massive sulphide mineralisation intersected in two of the first three diamond drill holes at its 100% owned high-grade zinc VMS project at Red Mountain in Alaska. The intervals correspond with the visible sulphide mineralisation previously reported (ASX Announcement 5th June 2018), as shown in Figures 1 & 2 (see link below).

These diamond drilling results are part of White Rock's maiden drill campaign at the Red Mountain project. The initial drilling results are from infill drilling of the two existing deposits, Dry Creek and West Tundra, with a Resource base of 16.7Mt at 8.9% ZnEq (see Note below) including a high-grade component of 9.1Mt @ 12.9% ZnEq (see Note below) (refer ASX announcement 26 April 2017 regarding the maiden Mineral Resource).

- The West Tundra hole (WT18-28) is the best drill hole intersection of all the historic holes drilled into this deposit.

At West Tundra, the WT18-28 high grade mineralisation intercept from 60.6 to 64.1 metres downhole has an estimated true width of 3.4m (see Figure 3 in link below) and is the best grade-thickness intersection for any drilling at West Tundra. This hole is some 75 metres from the nearest hole (WTF82-05) and indicates the sparse drilling at West Tundra (100-250 metre spacing) is open to improvements in grade and thickness with infill drilling. The first drill hole (WT18-27) drilled down a steep angled fault and did not intersect any significant base metal sulphide mineralisation.

At Dry Creek, the DC18-76 intercept is in line with surrounding drill intersections. The high-grade mineralisation from 63.9 to 72.7 metres downhole has an estimated true width of 7.9m (see Figure 4 in link below). This hole is some 20 metres from the nearest holes (DC97-33 and DC98-39).

MD & CEO Matt Gill said "These first drill assay results for the Dry Creek and West Tundra deposits validate our belief that these two deposits form part of a genuine high-grade zinc rich polymetallic VMS mineralisation system. Our exploration program focus is to expand the maiden Resource and to identify and test new targets to make the additional discoveries. Initial drilling and surface mapping and sampling have allowed us to characterise the mineralisation at Red Mountain, providing the knowledge with which to identify, prioritise and test these new targets. This is a great start to our 2018 exploration program and we are confident of adding to our maiden Resource in a meaningful way over the next few months."

Diamond drilling has now moved on to testing areas with the potential to extend the known Resources and a selection of new targets prioritised by surface mapping, geochemical sampling and geophysics.

Field crews commenced their field assessment (mapping and soil and rock chip sampling) on the highest priority targets at the beginning of June with the intention of undertaking mapping and surface sampling prior to selecting targets for drill testing throughout the 2018 campaign.

The geophysics crew has now also commenced field surveys with initial orientation work across the known mineralisation at Dry Creek in progress. Electrical surveys are expected to commence on new targets this week.

- The Red Mountain Project is located in central Alaska, 100km south of Fairbanks, in the Bonnifield Mining District. The tenement package comprises 230 mining claims over a total area of 143km2.

- Mineralisation occurs from surface and is open along strike and down-dip.

- Interpretation of the geologic setting indicates conditions that enhance the prospectivity for gold-rich mineralisation within the VMS system at Red Mountain. Gold mineralisation is usually found at the top of VMS base metal deposits or adjacent in the overlying sediments. Gold bearing host rocks are commonly not enriched in base metals and consequently often missed during early exploration sampling. This provides an exciting opportunity for potential further discoveries at Red Mountain.

- White Rock sees significant discovery potential, given the lack of modern day exploration at Red Mountain. This is further enhanced by the very nature of VMS clustering in camps, and the potentially large areas over which these can occur.