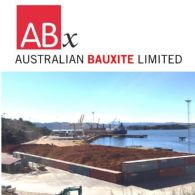 Emerging bauxite producer, Australian Bauxite Limited (ASX:ABX) (ABx) holds tenements covering the core of the Eastern Australian Bauxite Province (see Figure 6 in link below). ABx considers its Binjour Project located 115kms southwest of Bundaberg Port (see Figure 1 in link below) to be a discovery of a major bauxite province which is being assessed to become the company's flagship project over the next 5 years. Resource estimations are confirming the significant potential of Binjour.

A 3 to 15 metres thick layer of bauxite extends over the entire 44 square kilometre Binjour Plateau (see Figure 2 in link below). Parts of this bauxite layer totalling 10.4 million tonnes is suitable for simple bulkmining and shipping as "DSO Bauxite 1" whilst other areas totalling 26.6 million tonnes contain silica gel veinlets which require processing with ABx's proprietary TasTech technology to reduce silica and upgrade the Al2O3 content to meet the target production grade.

Mine planning and scheduling is in progress to determine the optimum mining and processing needed to achieve the two main Binjour Products, the grades of which have been established by a bulk sampling program that subsampled 2,000 tonnes of drillhole samples in December 2017.

Binjour Bauxite Project lies on a plateau located 115kms WSW from Bundaberg Export Port, in the Wide Bay Burnett Region of central Queensland, Australia. It is the best located of perhaps 5 projects in this region that may total in the order of 200 million tonnes of trihydrate gibbsite bauxite.

All roads are gazetted major highways but have axle loading constraints and total truck tonnage restrictions on certain bridges, as is normal in Queensland. Trucking from Binjour to the Port of Bundaberg ranges from 188km to 198km.

Port Bundaberg is a river port with inner port restrictions of 200 x 32 metre ship sizes due to swing basin limits and a 9.5 metre channel depth (11m at the loading pocket) at the lowest astronomical tide. However, studies of potential barge transhipment and loading onto Cape Size ships within the outer port limits are being studied in detail

Port Bundaberg connects directly to deepwater shipping routes via well-defined shipping channels with shifting sand seafloors. The shipping channels are located well south of the Great Barrier Reef and will have zero impact on it.

ABx has two granted exploration permits-mining EPM 18014 Binjour and EPM 18772 Binjour Extension covering the Binjour Plateau. Resources estimated and reported herein are all in EPM 18014 as shown in Figure 2 above (see link below). All tenements are in good standing and are unencumbered.

Other tenements in the area are shown in Figure 3 (see link below) following and include a granted Mining Lease at Toondoon 25km south of Binjour and exploration tenements (EPMs) at Toodoon and Brovinia.

The Binjour Bauxite Deposit occurs on land comprising freehold farms and lesser State Forest areas. It is not considered strategic cropping land but that will require confirmation in due course.

Native title applies to two small forestry reserve areas that may not be alienated land, covering approximately 7% of the bauxite resources. These can be excluded from any initial mining lease application should they prove to be native title so as to avoid undue project delays.

The district was subject to extensive tertiary alkali-basalt volcanic activity followed by deep weathering and topographic inversion (see Figure 5 overleaf in link below). A residual bauxite layer covers the main topographic high, Binjour Plateau. The Bauxite is interpreted to have been deposited as a flat lying of volcanic tuffaceous origin. This strata has been preserved on a series of plateaus which are remnants of an old peneplain surface.

Most bauxite lies beneath a soft, dry red mud horizon of variable thickness (typically 6m to 8m). Much of the high grade bauxite occurs in lenses and bands. Some bauxite zones are considered best suited to cement-grade because of intergranular clay veins (often halloysite-clay) but ABx's proprietary TasTech processing technology may increase yields of metallurgical grade bauxite. Bauxite occurs in both nodular and massive forms with the nodular bauxite sitting directly above the massive bauxite.

Underlying the bauxite is another mottled clay-mud unit which is probably more than 70m thick.

The bauxite generally outcrops on the edges of slopes and has been inferred to be the result of weathering around the edge of the plateau. Good continuity of the bauxite layer is displayed away from the outcropping bauxite, with the same layer being intercepted under the red clay layer well into the plateau.

Because of concealment by the upper mud clay layer there is significant potential for the discovery of additional bauxite resources both at Binjour and regionally.

Regional bauxite province: A province of bauxite deposits of various sizes on bauxite-hosting plateau extend south-south-westwards from Binjour Plateau for over 100kms - see Figure 1 above (see link below).

A total of 930 RC aircore holes have been drilled for 19,098m (average depth 20.5 metres). 30 of these holes are excluded from the database because they were either not on EPM 18014 or were for non-resource purposes. For resource estimation, the results from the 900 aircore holes totalling 18,599m (average depth 20.7m) on EPM 18014 were extracted from the ABx master database system called ABacus.

In addition, a 6-hole diamond drilling program was done at the end of the aircore drilling programs to assess the geological profile, collect samples for microscopy, petrology, mineralogy and density determinations by gravimetric methods (see below).

Drilling is conducted in a semi-random pattern largely governed by access and site availability. Drill spacing is typically between 75m and 150m. Drill chip recovery is extremely consistent at Binjour, mainly because of dry ground conditions above and through the bauxite layer. If the sample recovery was deemed to be significantly lower than expected, the hole was abandoned and a new hole started nearby.

All drill hole locations were surveyed at the time of drilling using hand held GPS, with accuracy of +/-5m. Topographic control was assessed using data from the 3 second SRTM derived digital elevation model. This procedure gives adequate accuracy for the level of the resource which has been defined using inverse distance squared grade interpolation in a 2-dimensional plan projection and confirmed by other methods.

Samples were collected at metre intervals and assessed by the geologist on site. All samples suspected of containing bauxite were split from the main sample bag using a broad headed, flat based shovel and placed in a calico bag for testing at ALS Laboratory in Brisbane.

A sub sample is also taken to be tested with the company's own mobile XRF device for rapid results, mainly silica determination. The mobile XRF results are used to lead further drilling.

A small grab sample of each 1 metre long sample is also added into a plastic mud-logger's chip tray. The remainder of the sample is stored in a secure lockup rented from the Forestry Department. All non-bauxite sample intervals are also stored at the lockup. All samples are stored in a neatly ordered pallet system allow-ing for easy recovery of every sample drilled.

Each metre interval is described in the field by colour, texture, lithology, apparent moisture and lumpiness (assessed visually). A brief description of the sample may also be written if there are interesting or distin-guishing features that need to be recorded separately from the ABx coding system. Each sample, chip tray, and hole rehabilitation is photographed for record keeping and review. 100% of the samples are logged.

The computerised logging information, scans of the had-written log sheets, photos of all samples and the drillhole itself before drilling and after rehabilitation are stored in ABx's proprietary database called ABacus so as to allow real-time inspection of any information (see Data storage below).

Comparisons of results from twinned holes (Levy, June 2012 "Twinned Holes Report Jun12.doc") suggest that the repeatability or "precision" of individual metre samples is low, probably due to the combined effects of variations in sieving yields in the laboratory and variable quality distributions throughout the bauxite hori-zon. This is not unusual for bauxite.

However, average grades of the full drill intercepts thicknesses and grades display a greater degree of short-distance continuity or "precision", probably due to random imprecision factors that average-out over the full bauxite intercept.

All assay, lithology, and collar data is securely stored on a proprietary Microsoft Access database system known as ABacus. ABacus has been specifically tailored for ABx by consultants GR-FX Pty Limited. The Database has inbuilt checks to ensure database integrity.

Paper logs can be displayed on screen with the digital data for further verification. The assay data is verified by checking that the totals of at least three different analysis sum to the same total as the original file pro-vided by the laboratory.

A photo of every sample, chip tray, hole rehabilitation, and scanned log sheet is also stored in the ABacus database. All hand written field logs are digitised by a trained database technician. The digital version is then double checked by the relevant geologist to ensure consistency.

25x25m Blocks were created in the east and north orientation and the Z value was a nominal 5 m, however the z value was replaced with modelled thickness for volume determinations similar to seam modelling. Polygons were then created to constrain the model, these polygons were drawn based on geological knowledge of the deposit style and topographic constrains. The block model was coded with 'rock type' based on the blocks contained in the provided polygons, as were the intercepts. The estimation was carried out using Inverse Distance Squared, no top cut was used. A search ellipse of 400x400m with a minimum of 1 sample and maximum of 12 samples was used to estimate blocks to the edges of the observed geological/ ore boundary.

This search ellipse was deemed adequate based on variogram analysis which indicated geostatistical continuity at this distance. Confidence in this distance is further strengthened when the geological model for this deposit indicates good horizontal continuity.

The number of samples used in the estimation of each block was recorded as was the distance to the closest sample from the estimated block and this information is used to help classify the blocks. Blocks with fewer than 3 samples (ie. 3 holes) were then removed from the model. Blocks with between 3 and 9 data points were classified as being inferred resources, and blocks with over 9 samples being classified as indicated.

An average of 1.9 t/m3 Specific Gravity was used to convert Volumes to Tonnes. This value was calculated by gravimetric and water displacement density testing methods based on samples collected from diamond drill core from a 6 hole diamond drilling program (Roach, 2012, "Core Program_Report_26102012_blr.doc"). Results are summarised below: (see link below)

To view the release with tables and figures, please visit:
http://abnnewswire.net/lnk/PC861P3H