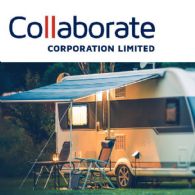 Collaborate Corporation Limited (ASX:CL8) (Collaborate or the Company) is pleased to provide an update on the Growth Opportunities announced on 30 April 2018.

The previously announced launch of short term car rentals of 3 days or more for DriveMyCar has been further improved by extending the functionality to now deliver 2+ day car rentals. This enhancement is expected to expand the addressable market, improve marketing effectiveness and increase revenue potential more than originally anticipated. Under the newly developed pricing model owners can now earn more income per day for short term rentals - up to 72% more income per day for 2 day rentals compared to a 7 day rental, whilst still ensuring a competitive offering to renters.

The functionality to enable owners to opt in for short term rentals was launched on 6 June and has seen over 160 vehicles opt in for the shorter rental periods. The majority of these are corporate fleet vehicles and we expect private vehicles to increase over time as owners update their preferences. Over 90% of cars are available for a minimum of 2 days.

The ability to book vehicles for 2+ day rentals will launch during the week commencing 25 June with updates to terms and conditions, damage liability waiver, extensions and cancellation policy and once testing has been completed.

The technology solution for the Apartment Car Share Pilot has been confirmed and the proposal for launch is under review by the strata committee representing residents of the apartment development on Sydney's north shore that has been chosen for the pilot. As previously announced, DriveMyCar will provide booking functionality, along with administration and insurance for vehicles for the Apartment Car Share Pilot which will provide residents of apartment developments with the opportunity to share their own cars with other residents.

The electronic direct mail and telephone marketing campaign to engage automotive dealers as supply and handover locations for vehicles commenced on 21 May and discussions are underway with a number of prospects identified in the early stages of this DriveMyCar campaign. Initial interest has been shown by larger dealers, which is positive from a scale and distribution perspective. Due to the often complex financing and ownership structures for vehicles held by automotive dealers the sign up process can be lengthy so priority will be given to identifying the dealers with the highest propensity for faster onboarding.

As announced on 29 May 2018, DriveMyCar has engaged with Busy Beaver Airport Parking to expand the services provided by RACV DriveMyCar in Melbourne. The two key components of the service were launched in June 2018. RACV DriveMyCar is now providing Tullamarine airport pick up options for rental cars at Busy Beaver Airport Parking 24 hours a day, 365 days a year including a complimentary 6 minute shuttle bus to and from the airport. In addition, RACV DriveMyCar is offering a ManageMyCar service enabling RACV members and other Victorian vehicle owners to have rental of their vehicles managed on their behalf including rental handovers and storage between rentals. All vehicles located at the Melbourne Airport Location will be available for 2+ day rentals.

The Peugeot experiential marketing campaign and rental opportunity for DriveMyCar was featured in The Australian and leading automotive industry publication, Go Auto News.

Channel Ten have covered the launch of the RACV DriveMyCar operation at Melbourne airport and the story is expected to be broadcast on Ten Eyewitness News in the week commencing 24 June.