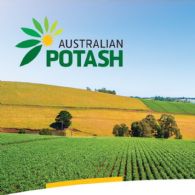 Australian Potash Limited (ASX:APC) (APC or the Company) is pleased to provide an update on the recently completed Air-Core drilling campaign at the Yamarna Gold Project.

- The significant bedrock gold anomaly over a 2,500-metre strike length identified at Target 15a remains open and is similar in scale to early AC drilling at recently identified high-grade Ibanez prospecti 2 kilometres to the south

- 5 of the 6 lines drilled for a total of 7,027 metres returned anomalous bedrock gold

Assay results from recent shallow Air-Core (AC) drilling have returned bedrock gold anomalism and confirmed a substantial and widespread gold mineralised system extending north from the Company's southern tenement boundary. A significant anomaly within target T15a stretches over 2,500 metres of strike and is open to the north-west and is up to 200 metres wide. The T15a anomaly is approaching the scale of the early stage AC anomaly at the Ibanez Prospect of southern neighbour Gold Road Resources Ltdi (see Figure 1 in link below).

Additionally, the northern most line of the 6 lines of new AC drilling returned anomalous results stretching over a 500 metre width. This anomaly is open along strike, where historical drilling was only selectively sampled.

Results received extend the mineralised system that has been identified in southern neighbouring tenements, into APC's Yamarna Gold Project. Gold anomaly levels are consistent with those reported from early AC drilling at the Ibanez and Stratocaster targets (see Note 1 below) where subsequent AC, Reverse Circulation (RC), and Diamond Drilling (DD) has revealed high grade gold mineralisation (see Note 2 below) (refer Figure 1 and 2 in link below).

Australian Potash, Executive Chairman, Matt Shackleton commented: "We are very pleased to report strong AC results from the drilling program following the targeting and lithological-geochemical work conducted by our consultants CSA Global. The purpose of the program was to explore for the continuity of the mineralised system successfully identified by our southern neighbour. As Figure 1 (see link below) shows, the continuity of the anomalous gold mineralised system and the large areas comprising each of the southern target areas indicate follow up drilling programs are strongly warranted. CSA Global are now modelling the full data set of assays from the program and we are working through the process of finalising drill plans for Stage 2 in conjunction with them."

Through April and early May, a total of 139 vertical AC drill holes between depths of 27 metres and 72 metres were completed over selected targets within the Yamarna Shear Zone for a total of 7,027 metres. Drill holes were generally spaced at 80 metre intervals with provision to infill to 40 metres where field observation warranted it. The rock types logged, and assay results received are all consistent with results reported by other companies working along this frontier greenstone belt.

Litho-geochemical and spectral analysis are being conducted on samples from this program by industry leading consultants CSA Global to assist in evaluating targets for more extensive drill testing. The combination of analysis techniques provides a robust basis for understanding the anomalism encountered and provides a sound platform for additional drilling.

Located at the northern end of the Yamarna Greenstone Belt in the Eastern Goldfields Province of Western Australia, the project area commences c.60 kilometres north-west of the 6-million-ounce Gruyere mine development. The significance of the Gruyere deposit prompted the Company to explore the gold mineralisation potential of its 1,400km2 ground holding.

In 2017, the Company commissioned industry leading geological consultants CSA Global to conduct a structural review of its tenure covering the Lake Wells/Yamarna Shear Zone. The results of this initial review and targeting exercise were discussed in an announcement released to the market on 27 July 2017 (see Note 3 below), and identified that the broad Lake Wells project area was conducive to Archaean Lode/orogenic gold style mineralisation, with a structural analogy to the southern Abitibi/Timmins in Canada.

Following the structural review, and with the knowledge that large mineral systems have large alteration halos, a program of litho-geochemical analysis was completed using existing drill data. With data limited to only 527 drill holes reaching basement rocks within the project area (representing approximately one sample per two square kilometres of APC ground holding) geochemical analysis and alteration mapping was considered likely to be an effective tool to refine targets generated in the structural study. These two reviews lead to high quality, early stage drill targets as shown further in Figure 2 (see link below).

Additional targets are likely to be generated as further information comes to hand and other areas come under scrutiny for gold potential.

In selecting targets for initial drill testing the southern area of the Yamarna Gold Project was selected due to the proximity to neighbouring prospects and an interpretation of magnetic data that suggests continuation of lithology between the two areas (see Figure 1 in link below).

Air-Core (AC) drilling was selected as the most suitable technique to cost effectively collect samples of bedrock through the unconsolidated cover sequences such as sand, clay, and highly weathered rock expected to be encountered.

Samples collected during drilling were composited to 4 metre intervals and submitted for gold analysis, with the last meter of each hole submitted individually and subjected to both gold and a multi-element analysis by four acid digestion. Multi-element and subsequent geochemical analysis is used to define anomalies and alteration zones that will generate targets for further testing. This analysis is continuing to be conducted by CSA Global.

Peak metamorphism through the area drilled is visually estimated to be lower amphibolite facies based on the observations of rock chips and end of hole 'core'.

Notable gold deposits that are hosted in this level of metamorphic rock or higher include Tropicana (+8Moz, 215km to the SSE), Hemlo (+21Moz, Abitibi, Canada) and Big Bell (+5Moz, Murchison, WA). Confirmation of metamorphic grade and the relevance to mineralisation is being confirmed using spectral analysis where mineral species can be accurately identified and reported.

The critical factor determining the preservation of a gold deposit in high grade metamorphic rocks is the timing of the mineralisation as it is considered that a deposit is only likely to be preserved if it is emplaced after the peak of metamorphism at these levels. There is visual evidence from the rock samples of hydrothermal alteration having occurred at lower metamorphic grades, and this is considered particularly encouraging.

The majority of the Yamarna sequence within the area drill tested appears to be composed of a variety of metamorphosed felsic and intermediate volcaniclastic rocks. Mafic rock types including schist and basalt, were observed in lesser amounts. Intrusive rocks are mostly monzodiorite, diorite, and tonalite in likely sills or dykes within the sequence, with granite in the easternmost drilling.

Deformation appears to have occurred under simple shear at ductile conditions in high-strain zones during peak metamorphism. Peripheral to these, there are a minimum of two strong foliations imposed upon the rocks, which show weak crenulations in phyllites and cross-cutting foliation sets in more gneissic rocks. The degree of deformation is relatively consistent throughout the area, and between different lithologies. Some areas appear to show a repetition of rock types that could represent tight isoclinal folds, as interpreted by CSA Global from the aeromagnetic data.

While more drilling is required to confirm these observations of deformation, the convergence of geochemistry, magnetic interpretation, and geology is critical in confirming targets and guiding additional testing.

The Company has also adopted a more robust target naming convention that references the targets generated during the CSA Global studies and allows for future refinement as work progresses on each target. Prospect names will be assigned to specific targets at an appropriate time.

CSA Global will finalise the update of their geochemical/lithological models over the coming weeks. The results of this process will feed directly into further target refinement and drilling plans.

A combination of AC and deeper Reverse Circulation (RC) drilling is being considered.

The remaining 16,000 metres of the planned 23,000 metre AC program will be directed towards testing several of the other drill targets identified in Figure 2 (see link below).

RC drilling to test depth and primary mineralised structures at Target Area 15 is being prioritised and will be refined further on the completion of CSA's modelling.