Queensland Bauxite Ltd (ASX:QBL) and MCL Will Merge to Become a Major Global Player on the World Scene in Medical Cannabis 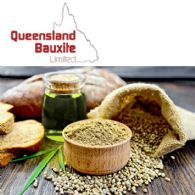 Pnina ('Diamond Rose') Feldman's Queensland Bauxite Limited (ASX:QBL) has announced today that QBL is undertaking a significant transformation of the Company from a mining exploration company with a Medical Cannabis subsidiary to a new major global Cannabis player through a 100% merger of its 55% owned subsidiary, Medical Cannabis Limited and the new 100% acquisition of Medcan Australia.

The 100% merger of MCL and QBL, which is expected to be approved by its shareholders, will allow the Company to complete two fully vertically integrated businesses with its Hemp Seed Food Division and Medical Cannabis Division. QBL will also be keeping its mining interests by setting up a separate Mining Division.

QBL today announced that it has made a 100% acquisition of the Australian Medical Cannabis company Medcan Australia. Medcan has an Office of Drug Control (ODC) approved Cannabis cultivation and production license and a secured DA approved facility, which when outfitted will boast as having one of the largest multi-million dollar 'state of the art' automated medical Cannabis cultivation and production facilities, to be found anywhere in the Southern Hemisphere. The Company also intends to develop and manufacture sought after Cannabis products in addition to its range of CannTab XR Medical Cannabis pills at this centre, for distribution to Australia and Asia. With this new ODC Medcan licence, MCL now has access to the full suite of Licenses enabling it to grow, produce and distribute low and high-grade THC/CBD Cannabis medical products and all Australian grown hemp seed nutritional products.

MCL's VitaSeed Division, presently has some of Australia's largest broad-acre hemp farms in New South Wales and Victoria, where it grows its Hemp Seed crops for the Australian Consumer. VitaSeed produces the Hemp Seed for MCL's subsidiary, VitaHemp.

Mrs Feldman, as the Executive Chairperson/ Business Development Manager for QBL: MCL and her "dedicated team of professionals" is very excited to oversee this significant transformation of the business from two separate entities into one multi-tiered company. QBL has invested a lot of time and resources searching the globe, to enlist the services of some of the world's leading specialists in the medical Cannabis field who will oversee and manage QBL's new Medical Cannabis Division. The team, led by Australian Cannabis researcher, Andrew Kavasilas, will include world-renown specialists from Israel, America, Canada and Australia. MCL is proud to have Dr David (Dedi) Meiri and his dedicated scientific team, at the Cannabis research centre at the Haifa Technion, Israel, conducting Advanced Medical Cannabis Research on behalf of MCL.

Pnina is confident, within the next 5 years, under the direction of the Board and the Executive management team, that the new look QBL with its Hemp Food, unique Cannabis seedbank, Medical Cannabis Pharmaceuticals/Therapeutics, and Mining Division will become one of Australia's leading ASX companies, as the company becomes a leading force in the burgeoning multi-billion dollar medical Cannabis global market.