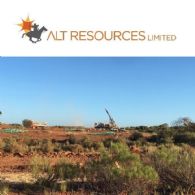 Alt Resources Ltd (ASX:ARS), (Alt or 'the Company') is pleased to announce the results from the final 30 RC holes drilled at the Emu deposit, Bottle Creek Gold Project, WA. Emu lies approximately 4 km to the north of the VB pit Figure 1 (see link below) and the final results indicate continuity of the broad gold zones encountered at Emu (see Note 1 below). Gold assays have been received from drillholes EMRC034 to 038 and EMRC072 to 096 with individual assays up to 55.6 g/t Au (see Note 2 below). Significant results are listed in detail in Table 1 (see link below). High grade gold zones occur within and alongside broad, consistently graded zones such as 24m @ 5.8 g/t Au (see Note 3 below). These broad zones of Au mineralisation are a positive feature for potential future mining operations, ensuring a minimal 'nugget' effect and a more easily extracted bulk target.

- Significant intercepts from the north end of Emu include:

The final results from north Emu demonstrate that mineralisation is open to the north, with the northern most line of drilling including 9m @ 3.95 g/t Au (EMRC086) and 11m @ 2.57 g/t Au (EMRC087; Figure 2 and Table 1) (see link below). This zone of gold mineralisation at north Emu has not been closed off by either modern or historical drilling along strike towards the Southwark deposit, which lies 600m to the north.

Drilling at the un-mined Emu deposit was completed on the 10th May, 2018, for a total of 8,500m. The program was achieved well ahead of schedule and within budget.

Alt CEO James Anderson said; "The final results from this RC program clearly indicate that the Emu deposit is very robust. We have 600 metres of infill drilling planned between the north end of the Emu deposit and the south end of the Southwark deposit. This is scheduled to commence in July 2018 with POWs recently approved. We are expecting the maiden resource for Bottle Creek to be completed and announced on schedule in August."

Significant gold intercepts from Alt's new drilling at the un-mined Emu deposit are listed in detail in Table 1 (see link below), and include:

Figure 2 and 3 (see link below) show cross-sections with new drilling and significant intercepts through the north end of the Emu deposit. These sections are located approximately 4 km north of the VB pit and 600m south of the Southwark deposit. The location of new drillholes discussed in this release is given in plan view in Figure 4 (see link below). The potential for continuity of mineralisation along strike towards the Southwark deposit is evident, given these results are encountered at the northern margin of established mineralisation at Emu. Further potential is evident at depth, where gold mineralisation has not yet been closed out by current drilling.

Boags, VB, Emu and Southwark are all situated on a NNW trending magnetic lineament as illustrated in Figure 1 (see link below). This lineament parallels a shear zone observed in the pit walls at both Boags and VB. Evidence for this shear zone has also been observed in both RC chips and diamond core at Emu and Southwark during Alt's recent drilling.

This shear appears to have formed along a NNW striking carbonaceous shale which likely acts as a rheological contrast to the surrounding mafic metavolcanics ("greenstones"). A porphyritic felsic unit occurs along this zone and appears to be the primary source for gold mineralisation at both Emu and Southwark. Gold intercepts are commonly but not always on the shale/felsic contact but largely hosted in the shale. Weathering and later stage remobilisation of gold away from this contact has added some complexity to the above.

Most recently Alt have completed a 1,100m diamond drillhole program. This program along with petrographic analysis of lithologic units will provide further understanding of the Bottle Creek geology.

The Bottle Creek gold mine lies 100 km north east of Menzies in the Mt Ida gold belt (see Figure 5 in link below). The gold mine is located on the northern extremity of the Mt Ida-Ularring greenstone belt extending from Davyhurst to Mt Alexander (see Figure 5 in link below). The Ularring greenstone belt forms the western part of the Norseman-Wiluna Province of the Yilgarn Craton. The location of mineralisation and local geology, is shown in Figure 6 (see link below).

During historical operation from 1988-1989, 90,000 oz Au was produced from two open pits (Boags and VB; see Figure 7 in link below). Significant historical drilling along a 9.8 km strike outlined the Emu, Southwark and XXXX deposits. However these were never mined. The historical RC drill fences were spaced at 100m, with infill drill line spacing at 50m and 25m at various locations. The majority of drilling targeted oxide mineralisation and reached no deeper than 80m vertically below surface.