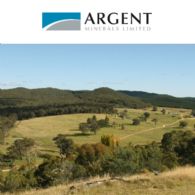 Argent Minerals Limited (ASX:ARD), (Argent, or the Company) is pleased to report that it has entered into a new agreement with the owners of the neighbouring Box Hill property to the north of the Company's freehold land at the Kempfield project in NSW. The new agreement replaces and supercedes the previous agreement announced on 27 June 2017.

- The agreement allows Argent to rapidly expand its freehold land ownership to 5.4 square kilometres at any time up to June 2020, extendable to June 2022, on fixed property purchase terms.

Under the terms of the agreement, which reflects the Argent's excellent working relationship with its neighbours, the Box Hill owners have committed to not challenge the grant or validity of the Company's regulatory applications and permitting or ancillary titles related to mining and development approvals ('No Challenge').

The purchase obligation arises in the event that Argent conducts any significant ground disturbances such as the construction of a mining operation (excluding trenching for exploration or testing purposes).

Under the terms of the agreement, Argent's obligation is to purchase the Box Hill property at the fixed price of $2.4 million (excluding GST) - the market value assessed by a licensed valuer in May 2018, and the following compensation.

Argent will compensate the owners by arranging the construction of a new house and out-buildings at another specified property belonging to the owners, all such improvements to reflect the design and specific attributes of the current improvements at Box Hill.

On completion of the agreement, Argent will then own the existing house and out-buildings at Box Hill, which the Company intends to utilise as a mine manager's residence and/or offices.

During the term of the agreement Argent will pay the owners $30,000 cash every six months, and issue $30,000 worth of ordinary Argent shares on each anniversary - both commencing by 5 July 2018.

The agreement represents a significant de-risking of the Kempfield project.

Noise and dust studies performed in relation to the Company's 2013 Environmental Impact Study determined that, since the Kempfield project mainly occupies Argent freehold land surrounded by hills, the main 3rd parties that would be affected by a mining operation are the owners of the Box Hill property located immediately to the north.

The agreement addresses these identified project risks through an agreed relocation and transition support process for the Box Hill owners, together with agreed commercial arrangements and the No Challenge provisions, as Argent continues to advance the project through further exploration drilling.

Argent retains the right during the agreement term to increase its existing freehold land at Kempfield from 115.8 to approximately 540 hectares (5.4 square kilometres) through exercise of the option. The option area includes the copper-gold footwall zone located to the west of the current Kempfield resource, as well as the historic Colossal Reef copper mine, which are both included in the next drilling programme.

The map in Figure 1 and project area photo in Figure 2 (see link below) illustrate the de-risking of the project.

The Kempfield project area is strategically situated in a historic gold producing area approximately 45 kilometres to the southeast of the Cadia copper-gold mine, and near existing infrastructure and major population centres that provide skilled labour and mining related services.

Kempfield is located approximately 30 kilometres to the south of Blayney, where the copper concentrates from the Cadia mine are dewatered, loaded and transported along the Main Western Railway to the loading terminal and shipping facility at Port Kembla on the eastern seaboard.

Preparations continue for the Kempfield drilling programme. Further key milestones will be reported to the ASX as they are achieved.