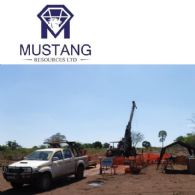 - The tests were conducted on samples of oxide, transition and fresh material taken from the area of Caula drilled in 2017

- Composites from borehole MODD015 were tested. This borehole is located in the middle of the 2017 boreholes

Mustang Managing Director Dr. Bernard Olivier said: "These metallurgical results are outstanding and provide further evidence of the exceptional quality of the graphite at Caula. We managed to achieve an extraodinary 27% increase in the cumulative proportion of large to super jumbo flakes (>180?m) while maintaining our exceptional concentrate grade of 97%. The large to super jumbo flake-sizes in the fresh zone increased from 55% to 68% while the cumulative oxide zone increased from 44% to 60%."

The Caula Project is in a unique position of hosting high-grade, shallow mineralisation with an exceptional combination of recovery, graphite concentrate flake-size distribution, and purity.

The flowsheet has been extended to allow integrated extraction of both graphite and vanadium from the same feed material. The first vanadium concentration work is currently in progress and result are expected in due course.

A further difference is that in this round of testwork the samples were composited into Fresh, Transition and Oxide. For earlier work, the samples had been composited into Fresh and Oxide, with the latter consisting of core material with any visible oxidation. This earlier "Oxide" classification is equivalent to a combination of the current "Oxide" and "Transition" classes.

The graphite concentrate grade and size distribution results achieved are summarised in Table 1(see link below).

All TGC concentrate assays quoted were determined using the double LOI method. All calculated TGC head assays from combined metallurgical test products were within experimental limitations of the composite grades.

A simplified comparison with the results announced on 17 December 2017 is shown below in Table 2(see link below). It can be seen that the proportion of concentrate with flake-size greater than 180 ?m has been substantially increased in the most recent work while the excellent concentrate grades have been maintained. For direct comparison with the earlier results a weighted average of the oxide and transitional results from the current work has been calculated and is shown as "Oxidised" in Table 2(see link below). The weighting is based on the composite weights shown in Table 3(see link below).

Oxide, Transitional and Fresh samples were formed from the intervals shown in Table 3(see link below).

For earlier testwork, core material showing any oxidation was classed as oxide. For this current round of work a further distinction was made. It was recognised that there is a near-surface (to about 30 metres downhole) zone of material which (from the sample analyses) appears to have been depleted in sodium (and potassium) by weathering. This has been classed as oxide. Below this (and to about 60 metres downhole) is a zone with visible signs of weathering which has been classed as transitional. In this zone, a variable proportion of sulfides has been oxidised. Fresh material is found further downhole. The oxide material is very friable whilst transitional and fresh materials are generally quite competent(see Note below).

Mustang greatly welcomes the prospect of developing a low-cost high-grade graphite product. The high head-grade and simplified flowsheet bode well for the Scoping Study to be completed in Q3. The estimated completion of the Scoping Study has been pushed back slightly due to unexpected delays in receiving the remaining assay results back from the independent laboratory. A smaller processing plant (with lower Capex) would be required to generate a similar final product output compared to other projects with lower grades or more complex metallurgy. To have the project located in the mining-friendly country of Mozambique gives further advantage when compared with projects in other less mining friendly juristictions.