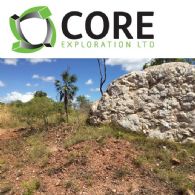 Emerging Northern Territory lithium producer, Core Exploration Ltd (ASX:CXO) (Core or the Company) is pleased to announce the release of its Pre-Feasibility Study (PFS) for the Grants Lithium Deposit, a key component of the Company's wholly-owned Finniss Lithium Project, located near Darwin in the Northern Territory.

- Initial development of Grants lithium deposit generates NPV10 of A$140 million (pre-tax) with an IRR (pre-tax) of 142% at average LOM concentrate price of US$649/t (FOB) over LOM;

- Project generates A$346 million in revenue and over A$168 million in free cashflow (pre-tax), driving rapid payback period of less than 12 months;

- Initial operational mine life of 26 months, producing a high-quality spodumene concentrate of 5.0% Li2O;

- Approximately 50% of the total development capital cost expected to be met with US$20 million pre-payment commitment by Core's largest shareholder and major Chinese lithium producer -Yahua Group (SHE:002497);

- Significant potential to enhance Finniss Project mine life and economics through the later integration of the nearby BP33 deposit, and discovery of additional deposits at Finniss; and

- CXO Board approves commencement of Feasibility Study, with target completion date of late 2018, and ultimate objective to propel Core into the ranks of ASX lithium producers in 2019.

Core has taken a major step forward in its goal to become a major Australian lithium producer through the delivery of this PFS, which seeks to unlock a new lithium province near Darwin in the Northern Territory.

Core's development of the Finniss Lithium Project is initially centred on production from the high-grade Grants deposit as an open pit mining operation, and construction of a simple 1Mtpa Dense Media Separation (DMS) process plant that will produce a high quality 5% spodumene concentrate for export.

The high grade of Grants, when coupled with proximity to infrastructure, low capital and operating costs, results in a development capable of delivering A$168 million (pre-tax) in free cash generation over a period of only 26 months. This strong cash surplus will ensure Core is well placed with a first-mover advantage in this exciting new lithium province and lays solid foundations for the building of a long-term lithium production hub.

Existing road infrastructure will provide access for daily road train movements of concentrate product to the Darwin Port for shipment which is located 88km from the Project area. The Project also has other substantial infrastructure advantages, including being close to grid-power, gas and rail infrastructure and being less than a 1-hour drive from the skills, trades, workshops and services in suburban Darwin.

The PFS clearly demonstrates the Finniss Project economics to be compelling, with globally competitive cash costs that result in high operating margins and rapid capital payback. Key outputs include:

Unless otherwise stated, all figures above assume a life of mine concentrate sales price of US$649/t (FOB) concentrate, and a USD/AUD exchange rate of 0.75.

The PFS confirms Grants as a financially viable operation, with A$346 million in revenue (pre-tax) to be generated over the 26-month life-of-mine, at a strong operating margin of 57% based on average life of mine sale price of US$649/t (FOB) (A$865/t at 75 cent exchange rate) concentrate, and up to 67% operating margin in the event sales prices closer to the current spot price of US$895/t (FOB) concentrate can be achieved. These strong operating margins provide for a rapid payback period of less than 12 months.

The simple process flowsheet for Grants is based on the construction of a new 1Mtpa Dense Media Separation (DMS) plant, resulting in a relatively low capital cost estimate, and reduced commissioning risk relative to some peer spodumene concentrate operations that require additional capital costs associated with flotation circuits.

"The results of the Pre-Feasibility Study are highly encouraging and puts the Finniss Project on track to become the Northern Territory's first producing lithium mine.

"The PFS confirms Grants as a simple but high value operation, with minimal spend required on infrastructure thanks to its simple mineralogy and location near Darwin Port.

"With the successful PFS under our belt, we will now look to complete a Definitive Feasibility Study on Grants before the end of the year, while also progressing our development initiatives at the adjacent BP33 deposit, which has considerable potential to further enhance the robustness of the Finniss Project.

"On behalf of the board, I would like to thank everyone involved in this process for their support and for their hard work to-date. We look forward to further progressing Grants into production in 2019."

Based on the positive outcomes of the PFS, the Core Board has resolved to immediately progress to a Definitive Feasibility Study on Grants (Feasibility Study). The Feasibility Study is expected to be delivered later in 2018, allowing for a development decision in early 2019 and rapid transition to construction and production status during 2019 as a result of the simple, low technical risk operation.

Completion of the PFS now paves the way for the Company to advance its offtake and financing discussions, and project permitting to ensure Core is positioned to commence development and construction in 2019 and be delivering spodumene concentrate to customers by the end of CY 2019.

In parallel with the Definitive Feasibility Study, permitting, offtake and financing discussions, Core will maintain an aggressive regional exploration campaign focused on growing the resource base of the Finniss Project to support a long-life mining operation.

Note: There is a low level of geological confidence associated with the inferred mineral resources and there is no certainty that further exploration work will result in the determination of indicated mineral resources or that the production target itself will be realised.

To view the PFS with tables and figures, please visit:
http://abnnewswire.net/lnk/D8400W51


News Provided by ABN Newswire
Read More..
The news, reports, views and opinions of authors (or source) expressed are their own and do not necessarily represent the views of CRWE World.