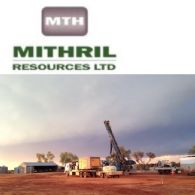 Due to the oversubscribed nature of the SPP, a scale back of applications was carried out at the Directors' discretion and primarily on a "first come - first served" basis (as per the SPP Terms and Conditions dated 31 May 2018).

SPP shares will be issued today (Tuesday 26 June 2018) with Shareholder allotment advice and refunds (if applicable) to be forwarded shortly thereafter.

The Company's Directors took up their full entitlement under the SPP.

Patersons Securities Ltd ("Patersons") partly underwrote the SPP up to $290,000 and has received no Shortfall.

The Company expresses its appreciation to participating shareholders for their ongoing support of the Company and its projects.

About the Kurnalpi Nickel Project

Mithril's recent drilling at the 100%-owned Kurnalpi Nickel Project (located 70 kms north east of Kalgoorlie, WA - see Figure 1 in link below) intersected a 4-metre zone of gossanous weathered ultramafic and several other narrow intervals of disseminated nickel sulphide mineralisation at the Kurnalpi Nickel-Cobalt Prospect which remains open in all directions. This is the first ever recognition of nickel sulphides within the project tenement boundaries.

Subsequent downhole EM geophysical surveying identified a new off hole conductor lying adjacent to the sulphide mineralisation on the eastern edge of the host ultramafic unit.

The south-plunging conductor (Conductivity Thickness of 3400S), which has not been previously drilled, is a priority for follow-up and three Reverse Circulation holes (750 metres) are planned as an initial test of the EM conductor and the gossan / sulphide intercepts.

The nickel prospective ultramafic rocks also extend for over 7 kilometres to the south with little, or no previous testing.

In addition to the planned drilling, the Company is planning to carry out ground EM geophysical surveying over the southern ultramafic, including a historic drill hole (KURA50) which intersected 20m @ 0.69% nickel, 0.07% cobalt from 32 metres including 8m @ 0.96% nickel, 0.09% cobalt from 36 metres and was never followed-up (see ASX Announcement dated 7 February 2018).

The aim of the EM geophysics is to define additional targets for drill testing.