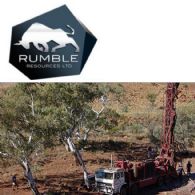 Rumble Resources Ltd (ASX:RTR) ("Rumble" or "the Company") is pleased to announce that ongoing systematic exploration at the Braeside project has confirmed high grade mineralisation and significantly discovered a large alteration system which complements the proposed porphyry related mineralisation model.

o All five new high-grade Zn breccia pipes targets (virgin - no historical workings) at Devon Cut returned high-grade Zn including and up to:

- Significant high-grade mineralisation has been delineated over a strike of 800m at the Mt Brockman 2 Prospect. Grab sample results include:

- A new large barium-potassium-lead alteration system has been discovered 5km north northwest along strike from the Devon Cut Prospect. Barium potassic feldspar (hyalophane) occurs over a strike of 1.8km and up to 70m in width. 30 grab samples were collected.

o All anomalous with average >1% BaO.

The current grab sampling has only tested six (6) of these new targets and in addition, tested historic workings at the Lightning Ridge Prospect and defined an area of extensive Ba-K-Pb alteration at a new discovery known as Barium Ridge.

The Lightning Ridge Prospect lies close to the eastern boundary of E45/2032 and comprises of a series of shallow historic pits trending northwest over a strike of 250m. Geological observation indicates the mineralisation is a different style than the mineralised trends further to the west (wide pervasively altered fracture zones). Massive galena pods are associated with relatively narrow high-level quartz veining. A total of eight grab samples were collected (in-situ). Most samples returned very high-grade Pb (up to 38.6% Pb) however the silver content is very high returning up to 1108 g/t Ag. Indium was also very high with a peak value of 515 ppm In. Zn was relatively low (peak value of 1.63% Zn).

Grab sampling of three high-order base metal in soil targets (pXRF) has confirmed high-grade in-situ Zn and Pb mineralisation along the north-northwest trending Gossan East - Boom Boom Mancini alteration structure. Only fourteen (14) grab samples have been collected along 5.4 km of strike. Results include

Six (6) samples collected over and along strike from some very small workings at the southern end of the Boom Boom Mancini trend returned strong Pb, Zn and Cu. Results include:

Three zones of high-grade base metal mineralisation focused in the Mt Brockman 2 area have been confirmed by grab sampling (multi-element analysis).

A potential new high grade Zn breccia pipe has been discovered over a strike of 100m at the southern end of the Mt Brockman 2 trend. Four (4) grab samples collected over very strong silica - sericite alteration (15m wide) returned zinc values of 31.24 % and 10.77% Zn. Other peak values include 11.83% Pb and 6.34% Cu.

A new zone of barium - potassium - lead anomalism associated with a large alteration system has been discovered approximately 5km north northwest along strike from the Devon Cut Prospect. The zone has a strike over 1.8km and is completely open. Alteration is up to 70m in width. Thirty (30) grab samples were collected from the alteration zone and 5 samples were analysed by XRD to confirm the mineral species related to the anomalism.

The XRD analysis has confirmed barium, potassium, lead and elevated rubidium are associated with feldspar. The feldspar belongs to the celsian - hyalophane group of relatively rare alkalic feldspars.

The average Pb content of all 30 samples is 2000ppm, with the peak value of 1.44% Pb. Rb was elevated with a peak value of 402ppm. Both the Pb and Rb report to the feldspar (hyalophane).

Five (5) new high-grade Zn breccia pipes have been inferred at Devon Cut based on the single RC drill-hole completed in Nov 2017 by Rumble (BRRC019 - 5m @ 8.0% Zn, 0.35% Pb from 32m within a broader zone of 30m @ 1.5% Zn from 28m). The single RC discovery drill-hole at Devon Cut was testing below a small historic mine (maximum depth of 8m). Geological observations defined multiple Zn gossans and characteristic oxidation textures/features indicative of Zn breccia pipes at surface with the workings and along strike. The discovery drill-hole and inferred breccia pipe is completely open. Based on the pXRF soil sampling and the latest very high-grade grab samples, the five new potential Zn breccia pipes along strike from the discovery have larger "signatures" and likely represent significant Zn mineralisation.

Rumble plans to test each potential new Zn breccia pipe with RC drilling. RC drilling is also planned to test the depth extension below the discovery hole (BRRC019) and immediately along strike to scope the size potential of the inferred breccia pipe.

The mineralisation style at Lightning Ridge differs from the large alteration systems with base metals that lie further west. Mineralisation is podiform and associated with narrow quartz veining and there is only a thin selvage of alteration host within volcanics. The zone is northwest trending with a strike of 250m bounded by terminating faults. The high-grade silver (up to 1108 g/t) is consistent with grab samples returning 100 - 200 g/t Ag on average. The indium is also very high (up to 515 ppm) along with very high-grade Pb (up to 38.6%). The style is inferred to be a distal high-level base metal epizonal/epithermal vein (based on the high silver and indium).

Three RC drill sections have been planned to test the 250m strike zone.

The mineralisation extends over a strike of 5.4km. Only fourteen (14) grab samples have been assayed with further sampling on-going. High-grade Pb and Cu with strongly anomalous Zn is associated with strike extensive silica-sericite altered zones with varying widths of 5 to 10m. Recent reconnaissance geological mapping and sampling subsequent to the current grab sampling results has identified significant Zn gossan outcrops along the Boom Boom Mancini trend. The style of target is considered to be similar to the Devon Cut Prospect.

Discovering disseminated Zn mineralisation in gently dipping volcaniclastics adjacent to north-south faults has highlighted the potential for porphyry related/VMS associated syngenetic to diagenetic sedimentary hosted base metal deposits. Elsewhere in the Braeside Project, disseminated Zn has been identified at the Bakers Dozen Prospect (see image 2 in link below) where pXRF soil geochemistry has outlined a 400m by 100m Zn anomaly (completely open). The Bakers Dozen Zn anomaly is hosted in siltstone over carbonate. The carbonate has no anomalism. The Zn values at Mt Brockman 2 Central Zinc Prospect are associated with Zn smectite (sauconite).

RC drilling is planned to test the Zn rich disseminated volcaniclastics in the primary zone. Subject to the mineralogy, if sauconite persists at depth, there is potential for non-sulphide supergene to hypogene Zn mineralisation styles.

A potential high grade Zn breccia pipe has been identified with very high-grade Zn (up to 31.24%) and intense silica - sericite alteration up to 15m in width. A single RC drill hole is planned with a deeper contingent hole if appropriate.

PropertyGuru Tackles Top Home Loan Refinancing Misconceptions Among Singaporeans in New Research
Capitol riots: Are US militia groups becoming more active?
US in Somalia: 'We still need the Americans for security'
A wristband that tells your boss if you are unhappy
Biden inauguration: How the White House gets ready for a new president
Nazi Ravensbrück camp: How ordinary women became SS torturers
Yemen: The doctor alone in a Covid-ravaged hospital
Covid: Australian Open players frustrated by quarantine after positive cases