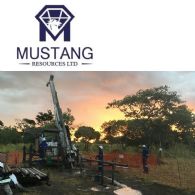 - The latest Vanadium results include:

- The latest Graphite results include:

The assays come from the final seven holes drilled as part of the Caula Scoping Study, which is scheduled for completion in the coming quarter.

The latest results contain exceptional assays of up to 1.9% vanadium (V2O5) and 28.9% Total Graphitic Carbon (TGC), as well as confirming the presence of elevated mineralisation around the anticlinal hinge.

The results also provide an important insight into the structure and controls of the vanadium-graphite mineralisation at Caula. Mustang is integrating these latest results with the existing data.

"The results further highlight the potential for Caula to be a world-class, low-cost graphite and vanadium supplier to the fast-growing battery industry."

The Caula Project is located along strike from Syrah Resources' (ASX:SYR) Balama graphite project in Mozambique.

The December 2017 diamond drilling campaign was designed as Resource infill and extension drilling as part of the Scoping Study for Caula. A total of 11 holes were completed for 1,421.5m with detailed logging undertaken.

Summary of the Drilling Results

This drilling has produced a number of exceptional shallow intersections.

Figure 2 (see link below) shows the locations of the diamond drill holes used to calculate the 2017 Inferred Mineral Resource as well as the locations of the drill holes with the assay results received in 2018. Figures 3 and 4 (see link below), show high-grade graphitic schists in the diamond drill core from MODD018 and MODD020.

Mustang is currently completing its Maiden Vanadium Resource and Upgraded Graphite Resource which it expects to be released by the end of July 2018 with the Scoping Study to be completed soon after.