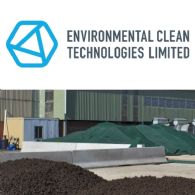 Environmental Clean Technologies Limited (ASX:ESI) (ECT or Company) is pleased to advise that the 170 million unlisted options issued in March 2016 (ESIOP1) have been approved for exercise under an Equity Lending Facility (ELF).

The holders of the unlisted options were approved for an ELF on Tuesday 26 June 2018 with the next steps being the conversion to fully paid ordinary shares during the first week of July, followed by the release of an Appendix 3B to the ASX.

The transactions, which constitute the exercise of all unlisted options on issue, require that the resulting shares be secured as collateral until the loan established under the relevant ELF is paid in full.

The ELF Loan & Security Deed provided by the Company's subsidiary, ECT Finance Limited, is consistent with the terms provided to holders of ESIOA and ESIOB options last year, with the following mutually agreed modifications:

- An interest free period applies up until the scheduled expiry of the options, being 31 July 2018, after which standard rates of interest will apply

- Application fees and super fund assessment fees will be waived

- Interest rate incentive to repay the loan regularly over the three-year term.

These modifications were granted in consideration of the option holders executing the transaction earlier than the 31 July 2018 expiry date, securing the stock under the encumbrance of each ELF loan.

Chairman, Glenn Fozard commented, "As the Company nears financial close for its India project it became clear that the market would appreciate a level of certainty regarding these options.

"The Company understands the frustration of shareholders given the current price activity, and as we approach our next significant milestone, the prospect of these options remaining open for exercise through to 31 July posed a perceived threat of further negative price pressure.

"We believe this transaction delivers a mutually beneficial outcome for the option holders and the Company and we look forward to focusing on the advancement of our India project."

A more detailed update on the Indian project, including the status of progress towards financial close is expected to be announced before 30 June.

The unlisted options were issued in March 2016 in satisfaction of contractual obligations related to the Options Exercise program announced on 9 January 2015. Specifically, they were replacement options for those listed options exercised at a time when doing so generated losses for the holders and the options were mainly exercised for the purpose of providing capital to the Company.

As per the recent Annual Report, the options were held by Marbrijen Pty Ltd (140 million) and Superior Coatings Pty Ltd (30 million).

The addition of this ELF position ($2.55M) brings the existing ELF loan book held by ECT Finance to ~$16.85M. This loan book is a potential source of financing for the parent company into the future.

When applied to lignite and some sub-bituminous coals, the Coldry beneficiation process produces a black coal equivalent (BCE) in the form of pellets. Coldry pellets have equal or superior energy value to many black coals and produce lower CO2 emissions than raw lignite.

The MATMOR process has the potential to revolutionise primary iron making.

MATMOR is a simple, low cost, low emission production technology, utilising the patented MATMOR retort, which enables the use of cheaper feedstocks to produce primary iron.

About the India R&D Project

The India project is aimed at advancing the Company's Coldry and Matmor technologies to demonstration and pilot scale, respectively, on the path to commercial deployment.

ECT has partnered with NLC India Limited and NMDC Limited to jointly fund and execute the project.