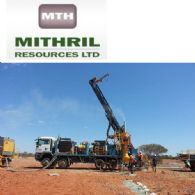 Mithril Resources Ltd ("Mithril" or the "Company") (ASX:MTH) is pleased to advise that it has received firm commitments to raise $428,732 through a share placement pursuant to Section 708 of the Corporations Act (Cth) at the same issue price to the recently completed Share Purchase Plan (SPP), being $0.0107 (1.07 cents) per share.

Funds raised will be used to drill test nickel sulphide targets at the 100% - owned Kurnalpi Nickel Project, support ongoing nickel and zinc target generation activities and for working capital purposes. EM geophysical surveying is scheduled to commence at Kurnalpi within the next three weeks with RC drilling to follow.

Mithril's Managing Director, Mr David Hutton said that he was very pleased with the outcome of the capital raising and looks forward to nickel sulphide exploration recommencing at Kurnalpi as soon as possible.

"We are very grateful to participating shareholders for their ongoing support of the Company and its projects, and welcome new shareholders to the register" he said.

Subsequent to the SPP, the Company conducted a "Top Up" Placement which was facilitated by Patersons Securities Ltd.

The Placement comprised the issue of 40,068,475 fully paid ordinary shares at the same price as the SPP ($0.0107 per share or 1.07 cents per share) and was made to sophisticated investors eligible under section 708 of the Corporations Act (Cth).

About the Kurnalpi Nickel Project

Mithril's recent drilling at the 100%-owned Kurnalpi Nickel Project (located 70 kms north east of Kalgoorlie, WA - see Figure 1 in link below) intersected a 4-metre zone of gossanous weathered ultramafic and several other narrow intervals of disseminated nickel sulphide mineralisation at the Kurnalpi Nickel-Cobalt Prospect which remains open in all directions.

This is the first ever recognition of nickel sulphides within the project tenement boundaries.

Subsequent downhole EM geophysical surveying identified a new off hole conductor lying adjacent to the sulphide mineralisation on the eastern edge of the host ultramafic unit.

The south-plunging conductor (Conductivity Thickness of 3400S), which has not been previously drilled, is a priority for follow-up and three Reverse Circulation holes (750 metres) are planned as an initial test of the EM conductor and the gossan / sulphide intercepts.

The nickel prospective ultramafic rocks also extend for over 7 kilometres to the south with little, or no previous testing.

In addition to the planned drilling, the Company is planning to carry out ground EM geophysical surveying over the southern ultramafic, including a historic drill hole (KURA50) which intersected 20m @ 0.69% nickel, 0.07% cobalt from 32 metres including 8m @ 0.96% nickel, 0.09% cobalt from 36 metres and was never followed-up (see ASX Announcement dated 7 February 2018).

The aim of the EM geophysics is to define additional targets for drill testing.