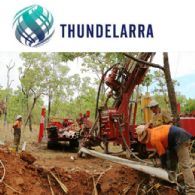 Thundelarra (ASX:THX) (OTCMKTS:TLXPF) is pleased to provide results from the air core drilling programme that successfully tested the potential for new zones of gold mineralisation at the Young, Lydia, Leanne, Ardeal and Transylvania prospects at our exciting Garden Gully gold project.

Four Sub Audio Magnetic ("SAM") geophysical surveys were then carried out over these target areas. Results confirmed the targets are associated with intense structural complexities interpreted to be controls on the mineralisation already identified at the Crown Prince, Lydia, Transylvania and now Young prospects. These new targets are interpreted to represent potential repetitions of the mineralised shoots identified to date at the Garden Gully Project.

Two east-west trending AC lines (34 holes for 1,597m). TGGAC184 was designed to test at depth the supergene gold mineralisation present in the old diggings. A narrow zone was intersected within the weathering profile (18-19m: 1m at 3.3 gpt Au). TGGAC181 returned high gold grades between 14-19m with native gold been panned from the approximately 3kg sample from 16-17m (see Figure 1 in link below). This inferred complex shear zone hosting the gold grades is located 150m WSW of the old diggings.

A subsequent SAM survey was undertaken and detailed mapping is now underway to understand the structural setting of the gold mineralisation. The conductive trends in Figure 5 (see link below) are from magneto metric conductivity ("MMC") imaging derived from the ground SAM survey. Six potential gold targets were delineated, all located within structural intersections. Four small magnetic anomalies were also identified and will be investigated by detailed mapping. The inferred mineralised shear zone on the western end of the northernmost line is displayed in cross-section in Figure 6 (see link below).

Six AC lines (68 holes for 3,862m) tested the bedrock under the shallow cover. Supergene gold mineralisation was intersected on the median part of three lines (see Figure 8 in link below). Assay results are based on five-metre composites. Most of the intersections are within the weathering profile; the supergene gold values are sourced from two inferred sub-vertical shear zones located under the old diggings, as illustrated in the cross-section presented in Figure 7 (see link below).

Six AC lines (74 holes for 4,291m) traversed the Lydia and Leanne prospects (see Figure 9 in link below). Anomalous gold values were intercepted just south of the Lydia NW prospect and also on the central part of the line drilled at the newly-identified Leanne prospect. Multiple new gold targets were identified from the recent follow-up SAM survey: they are displayed in Figure 9 (see link below) as yellow outlines.

As most of the previous drilling at Lydia NW was done west of the main mineralised shear and targeted at depth the primary shoots within this main structure, a decision was taken to drilled eight vertical AC holes into the main narrow shear (TGGAC147-154) to test the potential for gold mineralisation closer to surface. Figure 10 (see link below) presents the resultant long section.

Gold mineralisation was intersected in six of the eight holes, showing that supergene gold is present into the saprolitic/generally depleted zone above the variable base of oxidation varying between 50m and 90m. High grade shoots including 36-41m: 5m at 7.1 gpt Au; and 60-66m: 6m at 3.4 gpt Au (including 5m at 4.0 from 60m) were intercepted in TGGAC151 and 153 (see Figure 10 in link below).

Significant potential for additional gold resource is present within this 200m long structure which was previously drill-tested only below the base of oxidation. Recent SAM survey has delineated four more potential gold targets which will be tested as part of the next drill programme.

Six AC lines (98 holes for 4,275m) tested a strong magnetic target between the Crown Prince and Battery. Figure 11 (see link below) shows the distribution of the AC drill holes on the total magnetic intensity (TMI) image. A complex lithological package was intersected consisting of mafic and ultramafic rocks with black shales and various quartz veins exhibiting elevated arsenic values. Assay results from the southern part of the prospect, where the intense magnetic anomaly appears to be dismantled by late structures, have returned several "spikes" in gold values. Follow-up work, to include detailed mapping, further SAM surveying, and deep RC drilling with diamond tails are warranted.

Two distinct black shale units, previously delineated by ground induced polarisation surveys, offer potential to host VHMS mineralisation. A high magnetic trend, inferred to be attributed to a thick ultramafic unit, should be tested at depth in the next exploration phase and consequently the western part of the Battery Prospect, untested by previous drilling and which appears to be linked with it this feature, will be targeted by further drilling.

Thundelarra began exploration at Garden Gully in mid-2016 and continues to explore the project aggressively as we test the unquestioned potential of the exciting Garden Gully project.