Vancouver, British Columbia--(Newsfile Corp. - June 3, 2020) - Outcrop Gold Corp. (TSXV: OCG) ("Outcrop") is pleased to provide an update on exploration at the Santa Ana high-grade silver-gold project located in Colombia. Detailed geological mapping, trenching and soil sampling is successfully identifying drill targets in new areas. This work is revealing vein outcrops and coarse in-situ vein rubble in the El Dorado target and the Morales target to the west and south of La Ivana drilling. Photos 1 through 3 show newly discovered outcropping vein and workings in the El Dorado and Morales targets. Morales is located one kilometre to the west of the Roberto Tovar target further expanding the potential scale of Santa Ana.

Eight new drill-holes have been completed to date at La Ivana target for a total of 975 metres of drilling with assays pending. There are significant intervals of quartz-sulfide veins with sulfide-rich halos in the holes. Epithermal textures are expressed as colloform, banded quartz and breccias. Massive sulfides are common within vein intervals. The first assays are expected next week and will be released as they are received.

Soil sampling has been completed on the Megapozo, El Dorado, Roberto Tovar and San Antonio targets with assays pending. The first soil assays have been received on the Megapoza target returning exceptional gold and silver grades over wide areas. See Maps 1 (gold) and 2 (silver). Megapoza is on strike between the two targets that have been drilled to date - La Ivana and Roberto Tovar. These targets are 1.5 kilometres apart with both containing high grade mineralization. Megapoza potentially connects these targets.

At least five anomalous zones of gold and silver have been indentified at Megapoza, four of which present high values for both gold and silver, associated with the Paraiso, Miraflores and La Porfia veins. These results confirm the presence of an important regional ore shoot zone at Megapoza, possibly associated with the convergence of these veins.

"It is encouraging to see new targets supported by soil samples that correlate with newly discovered vein outcrop and workings. Veins and mineralization are expressing well in soil samples as indicated by an unusual soil assay high of 11.8 ppm gold," comments Joe Hebert, Chief Executive Officer. "It will be exciting to drill test these targets once drilling is completed at La Ivana target."

Soil sampling continues on the project, with 15 lines representing 5 linear kilometers, with sample intervals of 10 metres. 505 samples have been collected and partial results received for 170 samples. Significant anomalies in soils up to a high of 11.75 g Au/t and 336 g Ag/t occur. On soil lines the sample interval is 10 metres - commonly anomalies are from 30 to 50 metres wide - suggesting more than one vein is reflected in each anomalous zone. The results also show a very strong correlation to arsenic, lead and antimony confirming an epithermal event. 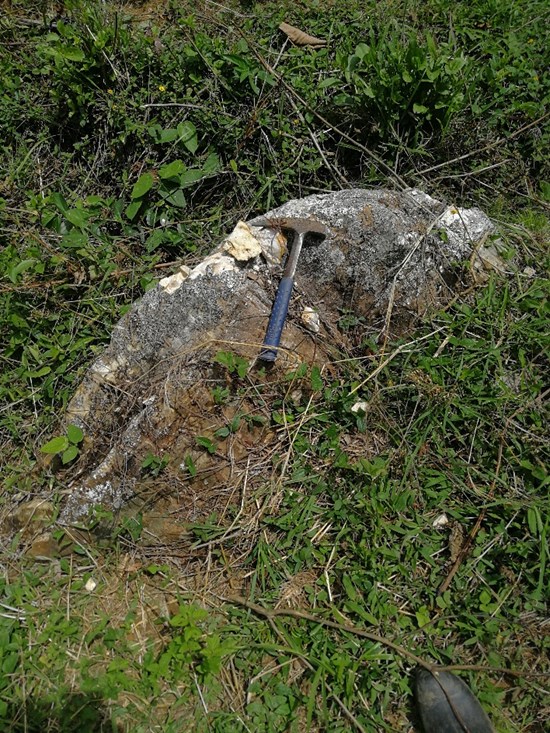 Photo 2 and 3: Newly discovered outcropping vein and workings in the Morales target.

To view an enhanced version of this graphic, please visit:
https://orders.newsfilecorp.com/files/6343/57203_outcropphoto.jpg 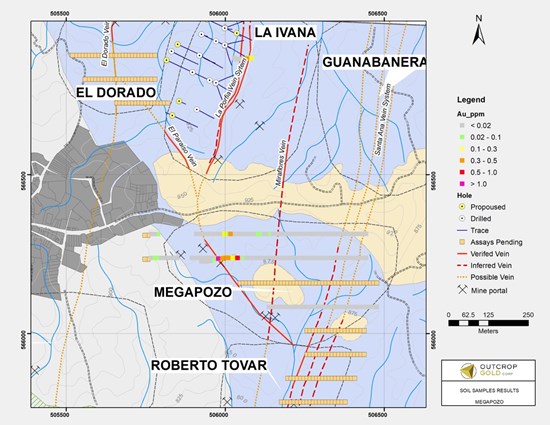 Map 1: Significant gold in soil anomalies are seen in the continuation of La Ivana into the Megapozo target. 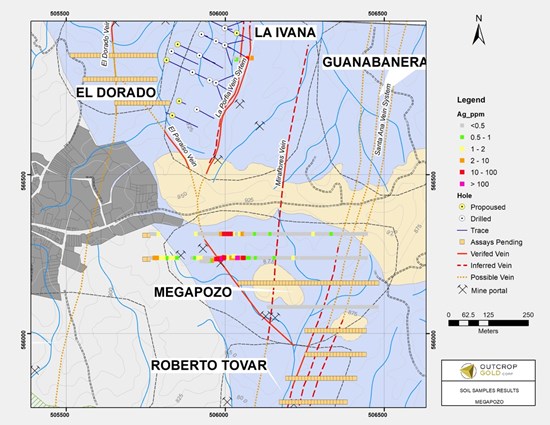 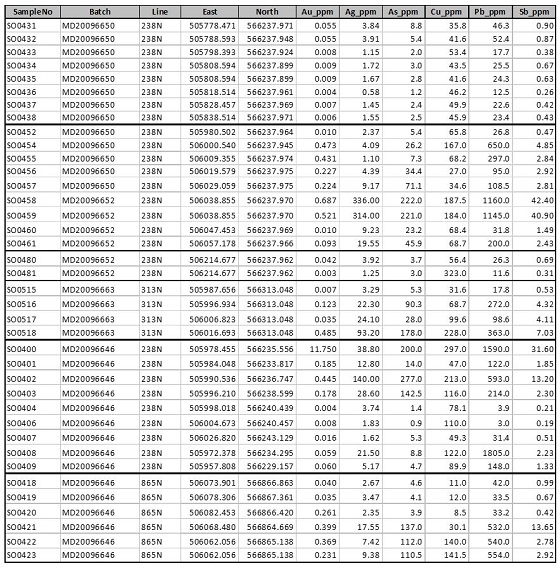 Table 1: Soil anomalies are reflected in gold and silver, and associated trace elements of arsenic, copper, lead and antimony.

To view an enhanced version of this graphic, please visit:
https://orders.newsfilecorp.com/files/6343/57203_outcroptable.jpg

442 soil samples were sent to ALS Chemex in Medellin for preparation and then to ALS Chemex Toronto for assays. For 201 results received, 32 were control samples including 9 standards, 7 blanks and 6 field duplicates and 9 prepartion duplicates. The standards included low-grade samples appropriate to soil sampling values expected. Blanks and standards show acceptable results according to measured standard deviation- it is concluded that both preparation and assay labs provided acceptable accuracy without measurable contamination. The soils were prepared by prep code 41 - where the entire sample is dried and then dry sieved using 180-micron screens. The minus fraction is retained for analysis. Gold and multi-element geochem were analyzed using Au-ME-TL43 with aqua regia disgestion.

The Santa Ana project comprises 3,538 ha located in the Municipality of Falan, Tolima Department, Colombia, approximately 15 km southeast of the of the town of Mariquita, and 190 km from Bogota, Colombia's capital city. The Santa Ana project covers a significant part of the Mariquita District where mining records date to at least 1585. The Mariquita District is the highest-grade primary silver district in Colombia. Under colonial Spanish era control of the mines, silver grades were reported to be among the highest in Latin America with the fourteen mines of Santa Ana producing average smelter returns of 4,300 g Ag/t from veins averaging 1.4 m wide.

Historic mining depths support a geologic and exploration model for a composite mesothermal and epithermal vein system having mineralization that likely extends to great depth. At Santa Ana it is unlikely that there is sharp elevation restriction common to high-grade zones in many epithermal systems with no mesozonal component.

Outcrop is a hybrid prospect generator active in Colombia acquiring gold and silver exploration projects with world-class discovery potential. Outcrop performs its own grass roots exploration and then employs a joint venture business model on its projects to maximize investor exposure to discovery and minimize financial risk. Outcrop has seven primary projects in Colombia with three at an advanced stage of exploration. Outcrop will conduct focused drilling on flagship properties such as Santa Ana to create its own catalysts for value creation and to receive full value for future joint ventures or dispositions.

The technical information in this news release has been approved by Joseph P Hebert, a qualified person as defined in NI43-101 and President and Chief Executive Officer to the Company.

ON BEHALF OF THE BOARD OF DIRECTORS

To view the source version of this press release, please visit https://www.newsfilecorp.com/release/57203

Sponsored
Also read
What Can Freight Management Software Do for You?
Product lifecycle management Market Strongly Driven by Rising Global Demand
The Global Kids’ Tablet Market is Expected to Reach a Significant Value by 2025.
Application Lifecycle Management Market by Technique & Data Validation
What is a Freight Management System?
The Klein Law Firm Reminds Investors of Class Actions on Behalf of Shareholders of CCL, FSCT and ENPH
Nestor Castro is Teaching the Younger Generation the Value of Money Through Financial Literacy
Safety and Tolerability of Anti-Coronavirus Drug Candidates Observed in an Animal Model Further Advances NanoViricides’ SARS-CoV-2 Therapeutics Program