Hole DM-22-273 is an aggressive step-out hole that tested continuation of mineralization in the Boulder Vein 200 meters below surface and 250 meters along strike to the east of previous deep intercepts (DM-22-229, -231) (Figure 2). The altered and mineralized intercept, encountered at a down hole depth of approximately 285 meters depth and persisting over 25 meters, is interpreted to be the structural zone hosting the Boulder Vein. The most recent modelling (2021) of the Boulder Vein did not extend this far east.

Significant mineralization within this zone extended over 16.55 meters returning 5.49 g/t Au, 80.9 g/t Ag and 1.21% Cu beginning at 291.45 meters and included a higher grade subinterval of 5.65 meters returning 11.02 gpt Au, 115.8 gpt Ag and 2.31% Cu beginning at 302.35 meters. The former intercept is the thickest mineralized core intercept across the Boulder Vein out of over 40,000 meters of previous drilling. True width of the intercept has yet to be fully confirmed but is estimated at approximately 75% of core length, or 12.41 meters wide.

"The high-grade gold intercept in hole DM-22-273 is one of the best Blue Lagoon has encountered on the Boulder Vein System to date," said Bill Cronk, Chief Geologist for Blue Lagoon. "The thickness of this mineralized zone, approximately 12.41 meters true width, is a game changer for us. At least an additional 250 meters of strike length is demonstrated by this intercept at depth. We expect that we will be able to add considerable tonnage to the vein as we pursue further drilling downdip and along strike. We currently have a drill rig located at the same collar location as hole DM-22-273 and will begin follow up drilling as part of our 2023 Phase One drill program scheduled to begin this week."

Phase One drilling in 2023 is anticipated to encompass approximately 5,000 meters of diamond core drilling. 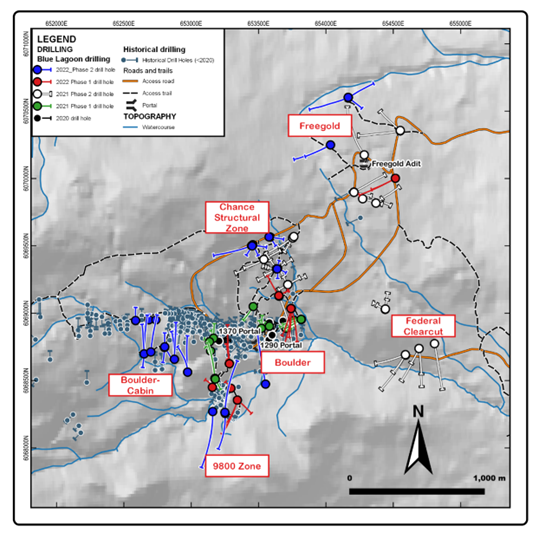 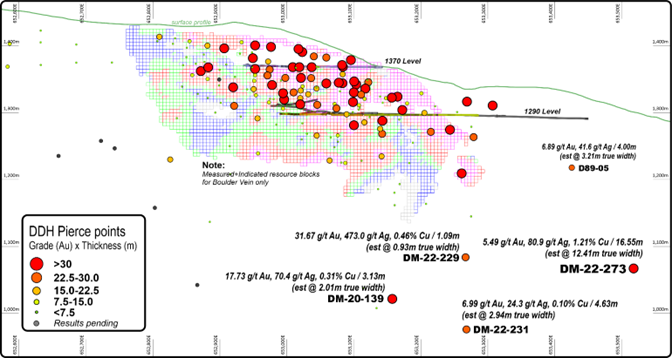 Recent drilling conducted by Blue Lagoon on the Boulder-Cabin Vein (the western extension of the Boulder Vein in an area historically referred to as the Cabin Vein) (Figure 4), extends potential quartz-carbonate vein mineralization approximately 650 meters west of the current modelled resource. Historic trenching and drilling along this structure demonstrates that the mineralized structure hosting the known Boulder Vein resources does continue, however it was thought to be spotty and limited in gold grade. A surface dump of the vein material from historical trenching was also sampled during the 2022 work program. Randomized composite grab samples from eight stations across the dump returned gold grades ranging from 1.49 to 14.50 g/t Au and 34.7 to 376 g/t Ag along with significant copper, lead and zinc concentrations (Table 2). It is not known from what trench(es) this material was sourced and are only a demonstration of the expected grades from this area. 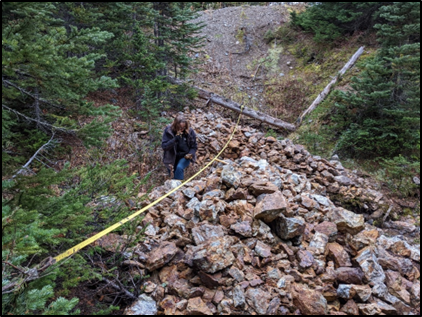 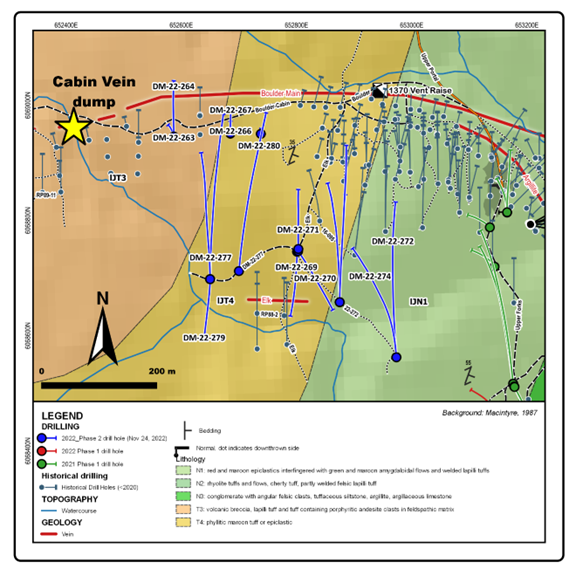 Two additional drill holes were completed in the Chance Structural Zone/Flat Chance Vein area following the news release of September 19, 2022 (Figure 5). Drill holes DM-22-254 and 255 were completed to test a preliminary IP target and the Flat Chance vein, respectively. No significant results were obtained from hole DM-22-254, while hole -255 encountered a narrow anomalous vein at the anticipated depth of the Flat Chance vein (0.98 g/t Au over 0.30 meters). 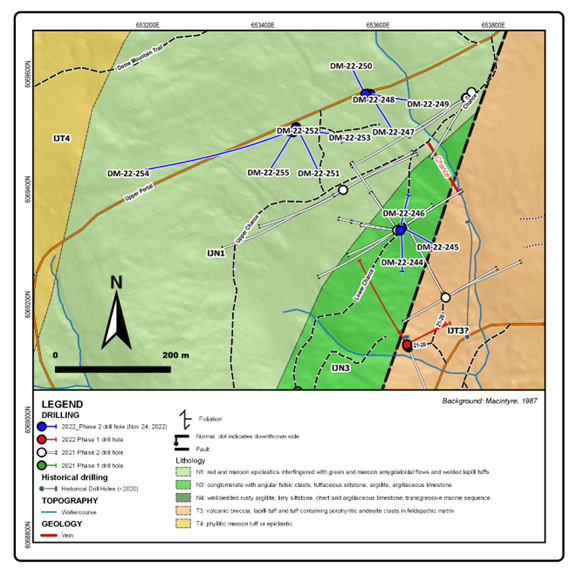 Drill holes DM-22-259, -260 and -261 were sited on the eastern side of the intrusive. Hole DM-22-259 targeted surface mineralization encountered in some old exploration pits. This mineralization was intersected at depth returning 4.36 g/t Au over 2.00 metres (from 75 to 77 meters). Drill hole DM-22-260 tested for a possible on-strike extension from DM-22-259, as well as possible up-dip extension of mineralized veins in hole DM-21-176. Drill hole DM-22-261 attempted to drill back into the intrusive but it was not encountered. No significant results were returned from core sampling in these two holes. 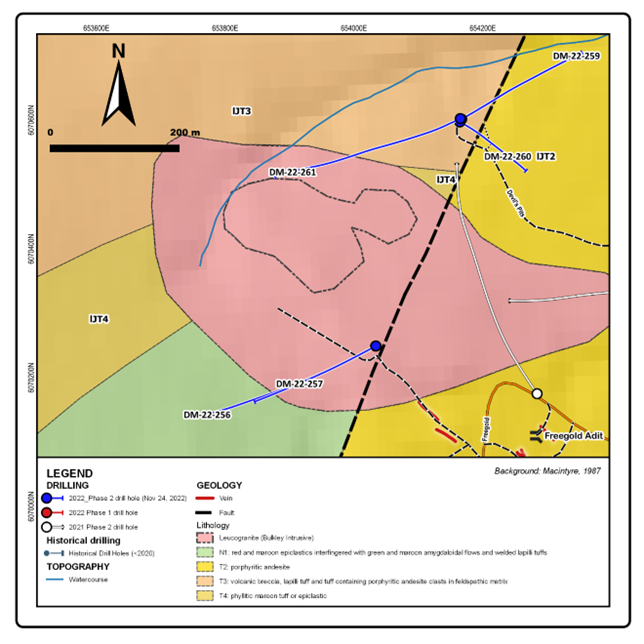 The Elk Vein is a quartz-carbonate sulphide vein located to the south of, and oriented parallel to sub-parallel to the Boulder Vein. Historical drilling had intersected precious metal mineralization of up to 9.83 g/t Au over 1.66 meters (drill hole RP88-22). Three drill holes were collared to test the continuity of the vein along strike (Figure 6). The Elk Vein was encountered in all drill holes and returned modest gold grades (<5 g/t Au) over narrow widths (< 2 meters core length). Another parallel but narrower vein was intersected in both drill holes DM-22-269 and -270 before intersecting the Elk Vein. Gold grades and were comparable to the Elk Vein proper. 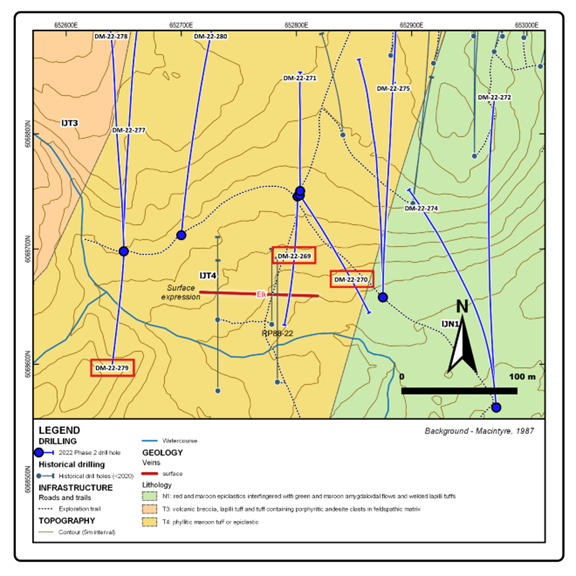 The vein-hosting structure does appear continuous over some 250 metres of strike.

Follow-up drilling was completed in the 9800 Zone area, attempting to test the strike and dip extent of a massive sulphide and vein horizon drilled in DM-22-241 (14.20 g/t Au and 92.9 g/t Ag over 1.02 metres), from the 2022 Phase 1 campaign. Historical airborne geophysics indicated the presence of two moderate to strong linear conductors in the vicinity of the mineralization. Two drill holes (DM-22-258, and -262) were completed but no comparable mineralization was encountered in either drill hole. Drill hole DM-22-262 did encounter anomalous mineralization near top-of-hole, related to the historical near-surface 9800 Zone mineralization. This is represented by graphitic limy sediments with pyrite, sphalerite, galena, arsenopyrite and chalcopyrite mineralization. 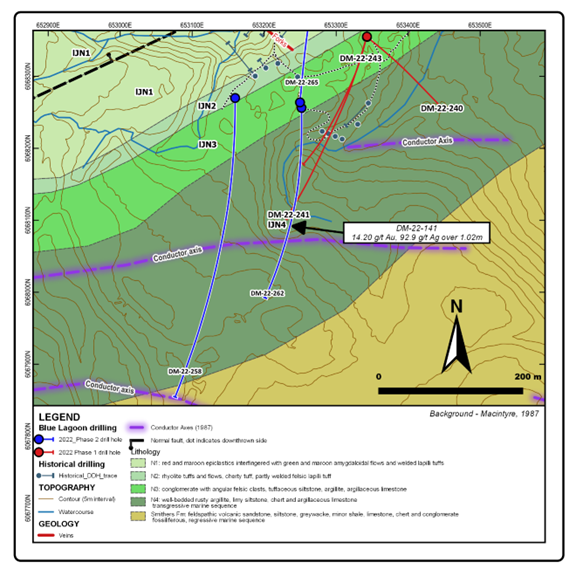 Diamond drilling was undertaken in the Federal Clearcut area to investigate a linear magnetic feature as well as an EM anomaly defined by the 2020 airborne geophysical survey (Figure 8).

Four drillholes (DM-21-192, -194, -196, and -198) were collared to test an EM/mag anomaly from the upper part of the clearcut (Federal EM target). The remaining holes were drilled to test the linear magnetic feature that roughly parallels Federal Creek (Federal Clearcut target). Federal Creek was interpreted to be a surface expression of a structural feature, likely a fault. A strong EM anomaly to the west was also evaluated by the westernmost hole, hole DM-21-202 (Figure 8) 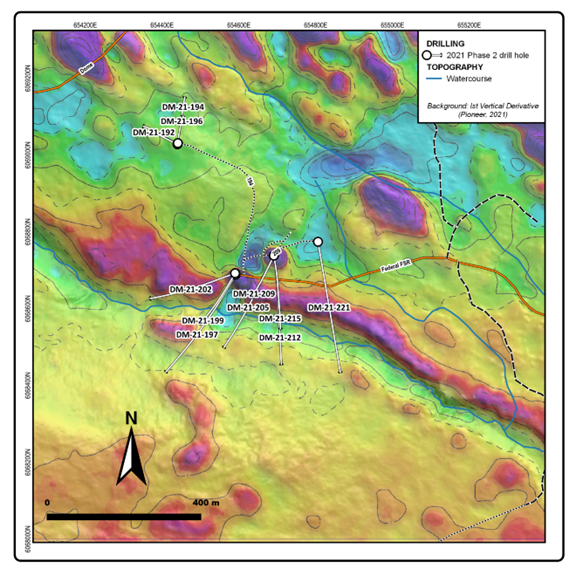 In the area of drilling along Federal Creek, the geology drilled can broadly be divided into an upper package of volcaniclastics underlain by a distinctive, strongly sheared, graphitic argillites and mudstones, further underlain by additional courser grained siltstones to sandstones (likely of volcanic origin), and finally underlain by coarser volcaniclastics. Moderate to strong shearing is present through these other lithological units. Drilling to date suggests stratigraphy is shallow dipping toward the south.

Sulphide mineralization is prevalent through much of the entire drilled lithologies but is best developed in the graphitic argillites and attendant veins, and in brecciated lithic tuffs above the argillite, also cut by quartz-carbonate +/- sulphide veins. Pyrite is the dominant sulphide present.

The mineral assemblage and depositional environment suggest a sedimentary-exhalative environment. Position of a local intrusive and apparent widespread sulfide mineralization/alteration in the Federal area will remain a target for follow-up at a later date.

Core selected for sampling was cut in half with a core saw or split with a hydraulic splitter with one half bagged for shipping. Strict chain of custody storing, and shipping protocol was maintained. All core preparation and analyses were completed by Activation Laboratories Ltd. located in Kamloops, BC. Core was crushed, split, and pulverized with 250 grams passing 200 mesh. Each sample was analyzed for gold by fire assay with ICP-OES finish (Act Labs Code 1A2-ICP) and for multi-elements by 4-acid total digestion ICP with OES finish.(Act Labs Code 1F2) Any gold overlimits (>30 ppm Au) were analyzed by gravimetric fire assay. Standards and blanks were inserted by Company staff. The drilling and sampling program was undertaken by Company personnel and under the direction of Ted Vanderwart, P.Geo.

The scientific and technical disclosure in this news release was approved by William Cronk, P.Geo, a Qualified Person as defined in NI 43-101 and a consultant to the Company.

The CSE has not reviewed and does not accept responsibility for the adequacy or accuracy of this release.