WHITE ROCK, BC / ACCESSWIRE / January 17, 2023 / TDG Gold Corp (TSXV:TDG) (the "Company" or "TDG") is pleased to announce the expansion of the exploration target area at Greater Shasta to 5.5 square kilometres ("sq.km"). Fieldwork completed by TDG in 2022 has identified a large gold in soil anomaly coincident with geophysical anomalies adjacent to the Shasta depositwhich covers a much larger area than the 1.2 sq.km exploration target area originally reported by TDG in 2021 (link). TDG applied the same scientific methods used by Newmont Corporation in 1984 to discover the Shasta deposit. The anomaly may also continue a further 1.5 km to the north-northwest to the Newberry target - also discovered by Newmont in 1984; and may also continue 1.5 km to the south-southeast beyond Shasta South (Figure 1). 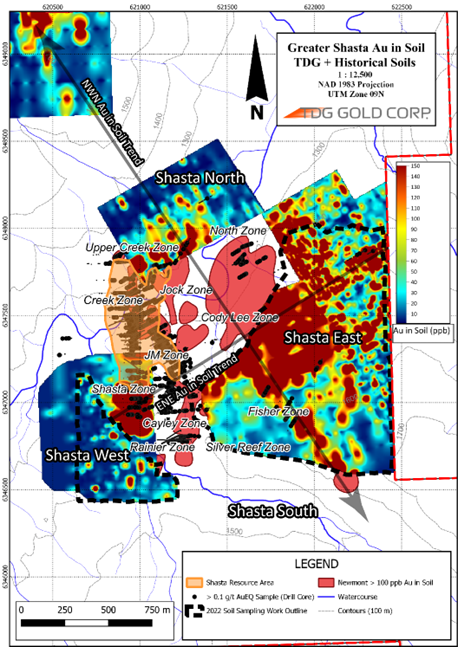 Preliminary results from soil assays include samples containing up to 1.72 grams per tonne ("g/t") gold ("Au") coincident with geophysical anomalies and covering a broad area approximately 4.5 times bigger than currently drill tested.The soil anomaly is supported by geophysical anomalies identified by a combination of ground magnetics and Very Low Frequency ("VLF") surveying completed by TDG and which also correlates with historical information recompiled by TDG - including data and information from the original discovery work undertaken by Newmont (Figure 2). 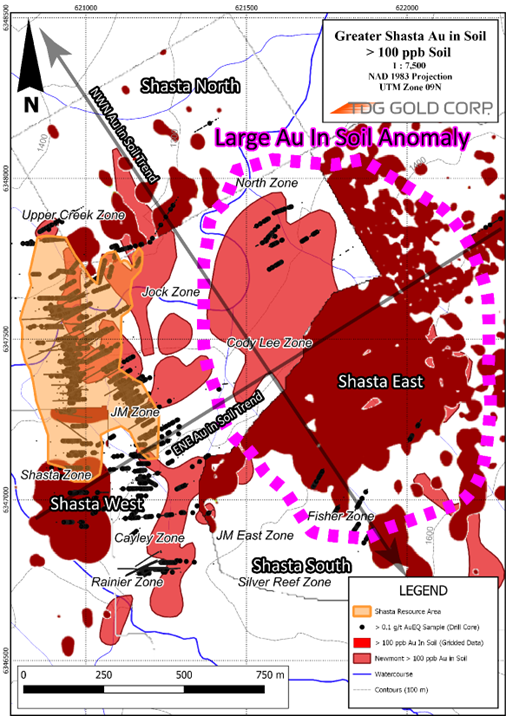 Fieldwork was undertaken by TDG in 2022 on Shasta East, Shasta South and Shasta North. The grassroots component of fieldwork completed in August-September 2022 consisted of soil sampling, a ground magnetic and VLF geophysical survey and airborne hyperspectral capture. This fieldwork, in combination with historical information recompiled from multiple sources, has led to a new interpretation of a larger exploration opportunity and which incorporates the Shasta main deposit and all previously identified target zones into a much larger exploration target area: Greater Shasta. Within Greater Shasta, TDG has identified two higher priority zones for follow up work in 2023: the Cody Lee Zone and the Fisher Zone.

The earliest geochemical soil surveys consist of soil grids completed by Shasta Mines and Oil, Ltd., Newmont Exploration and other previous operators, in the Greater Shasta area. These surveys were generations of smaller surveys that often were restricted to claim boundaries before the Baker-Shasta mineral tenures were amalgamated. While the previous work by previous operators was methodical and of a high standard, the original data has not all been fully recovered or is all usable. Data recovered from Newmont work outlines areas Newmont determined to be anomalous in gold Au in soil (> 100 parts per billion "ppb"). A number of large Au in soil anomalies and extensive VLF EM-16R ground geophysical apparent resistivity and Electromagnetic ("EM") surveys were completed and led to scout drilling in several areas. Two dominant Au in soil trends are identified: i) towards Newberry in the north-northwest and towards Shasta South in the south-southeast; and, ii) one east-northeast intersecting the first trend in the centre of the Cody Lee Zone. These trends have strike length of approximately 3.5 km and 1.9 km, respectively, and have a significant component of strike length that remains undrilled. In addition, many large ovoid anomalies defined by these early surveys remain undrilled (Figures 1 and 2).

TDG advanced the geochemical survey database in 2022 by collecting 880 new soil samples taken with modern GPS coordinates to better define and delineate anomalous soil trends and areas. This work has confirmed the pronounced north-northwest linear trend approximately 950 m long by 60-110 m wide Au in soil anomaly greater than 100 ppb with concentrations ranging from 59 ppb to 1.2 g/t Au in soil (Figure 2). This well-defined corridor of Au in soil anomaly appears to confirm and connect along strike to the Newberry Target, and remains open to the south-southeast, towards Shasta South (Figure 1).

A large +1 km long, linear east-northeast striking soil anomaly is present east of the Shasta deposit. At its eastern extremity it corresponds to a large area of exposed hydrothermal breccias and argillic alteration, extensive stockwork quartz, calcite veining and gossanous soils. The soil anomaly, defined by samples generally averaging > 100 ppb Au and ranging from 20-1,520 ppb Au, is approximately 100 m wide. On its west-southwest extremity, the feature merges with and intersects the linear soil and geophysical features associated with the Cody Lee and Fisher Zones making a broad 850 m to 1000 m diameter ovoid anomaly > 100 ppb Au. The north side of the anomalous soils abuts up against alluvial valley fill and glacial deposits and was not sampled, but data was interpreted from the Newmont work. There have been very few drillholes within this larger feature. The drilling that did occur intersected Au and silver ("Ag") mineralization (shown in Figures). This feature is larger than the original soil feature that defined the Shasta deposit and is a compelling target area given the geophysical and geochemical support (Figure 2).

The Cody Lee Target Zone corresponds with several linear ground and airborne geophysical features. The prospect lies along a steep magnetic gradient and within a magnetic low which also corresponds to a zone of low magnetic susceptibility in the host intermediate volcanic and epiclastic rocks. Unmineralized lithologies in the immediate vicinity contain significant amounts of disseminated magnetite whereas exposed outcrops in this zone do not; however, they do contain sulphides and extensive carbonate + potassium feldspar + quartz veining suggesting magnetite destruction and sulphidation during hydrothermal alteration. These magnetic features and the prospect are coincident with a linear conductive feature interpreted from the Fraser Filtered VLF surveys and suggest the presence of a +3.5 km long fault system extending to the north-northwest and south-southeast from the Shasta Deposit where only limited drilling has been completed by previous operators (Figure 3; and TDG News Release October 17, 2022). 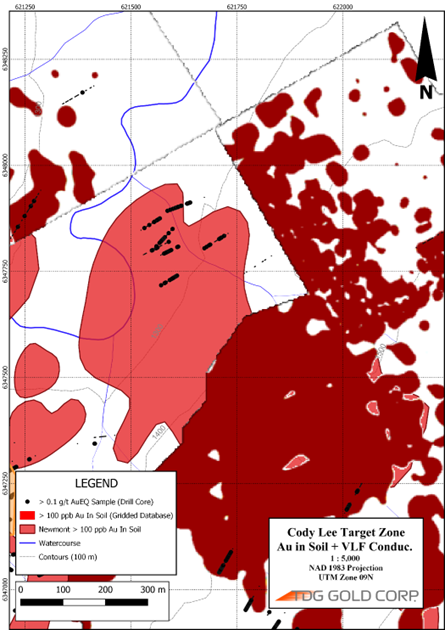 The Fisher Target Zone consists of a linear 950 m long x 100 m wide Au and Ag in soil anomaly that is open to the north-northwest and to the south-southeast. It corresponds with several linear ground and airborne geophysical features. The target zone lies along a steep magnetic gradient and corresponds to a zone of low magnetic susceptibility in the host intermediate volcanic and epiclastic rocks. Extensive carbonate + potassium feldspar + quartz veining is reported in this area and observed in frost boils, old roadcuts and felsenmeer. These magnetic features and the prospect are coincident with a linear conductive feature interpreted from the Fraser Filtered VLF surveys and suggest the presence of a multi-km long fault system extending to the north-northwest and south-southeast from the Shasta Deposit where only limited drilling has been completed by previous operators (See Table 1 of TDG News Release October 17, 2022). It is along strike from the Newberry prospect which is located approximately 2 km to the north-northwest (Figure 4). 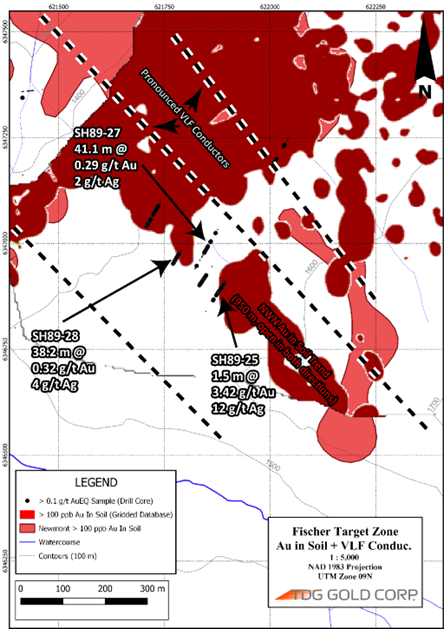 The technical content of this news release has been reviewed and approved Steven Kramar, MSc., P.Geo., Vice President, Exploration for TDG Gold Corp., a qualified person as defined by National Instrument 43-101.

This news release includes historical information that has been reviewed by the Company's geological team and qualified person. The Company's review of the historical records and information reasonably substantiate the validity of the information presented in this news release; however, the Company cannot directly verify the accuracy of the historical data, including the procedures used for sample collection and analysis. There is insufficient exploration on these prospects to define a mineral resource. It is uncertain if after additional exploration a mineral resource will be delineated. Therefore, the Company encourages investors to exercise appropriate caution when evaluating these results.

TDG is a major mineral claim holder in the historical Toodoggone Production Corridor of north-central British Columbia, Canada, with over 23,000 hectares of brownfield and greenfield exploration opportunities under direct ownership or earn-in agreement. TDG's flagship projects are the former producing, high grade gold-silver Shasta, Baker and Mets mines, which are all road accessible, produced intermittently between 1981-2012, and have over 65,000 m of historical drilling. The projects have been advanced through compilation of historical data, new geological mapping, geochemical and geophysical surveys, and at Shasta, drill testing of the known mineralization occurrences and their extensions. An initial NI 43-101 Mineral Resource Estimate was published for Shasta in May 2022, while additional extensional and new target areas surrounding the project have been identified and prioritized for future drill programs.