THIS NEWS RELEASE IS NOT FOR DISTRIBUTION TO U.S. NEWSWIRE SERVICES FOR DISSEMINATION IN THE UNITED STATES

VANCOUVER, BC / ACCESSWIRE / January 19, 2023 /Gama Explorations Inc. (CSE:GAMA)(FSE:N79) ("Gama" or the "Company") is pleased to announce that, further to its press release dated January 16th, 2023, it has entered into a definitive option agreement (the "Agreement") to acquire a 100% interest in the Muskox Lithium Property (the "Property") in the Yellowknife Pegmatite Province of The Northwest Territories, Canada.

"We are excited to announce this definitive agreement for the Muskox property, which we expect to be a key aspect of our 2023 exploration program," stated Dr. Mick Carew, CEO of Gama. "Hosting one known pegmatite that has been tested with channel samples, we believe that significant upside potential exists through the delineation of additional pegmatite targets. The technical team at Gama is excited to unlock additional value on this new asset over 2023 through thorough and systematic exploration." 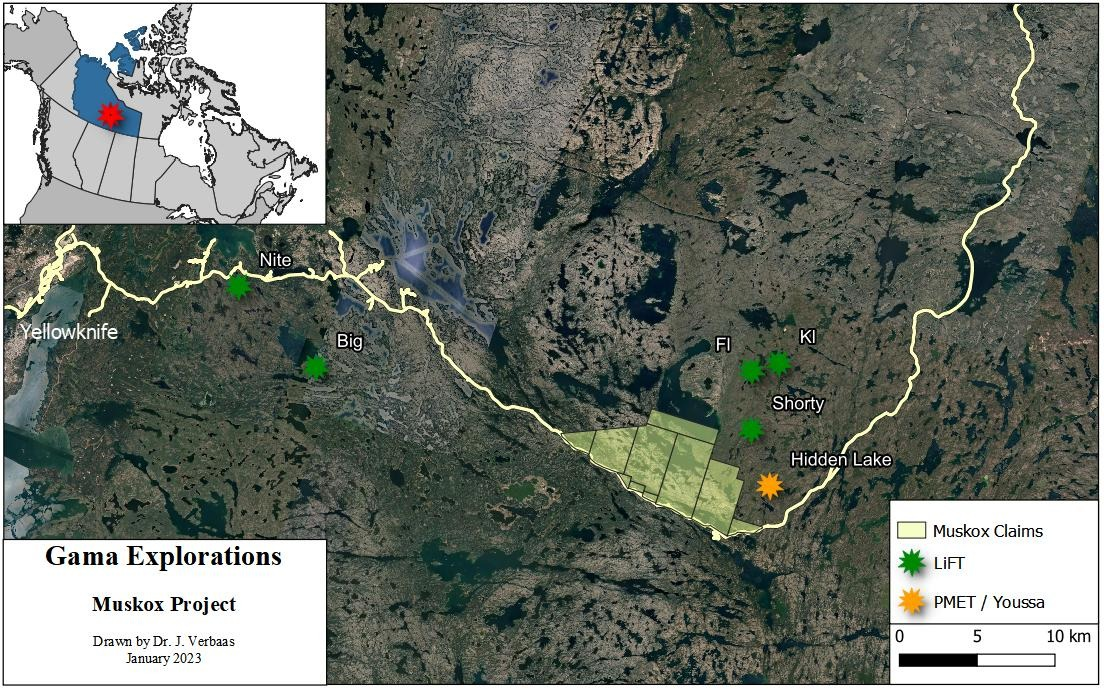 About the Muskox Pegmatite Lithium Property

The Muskox Pegmatite Lithium Project is located approximately 40 km east of the city of Yellowknife in the Northwest Territories (Figure 1). The project covers a 50 km2 area within the centre of the Yellowknife Pegmatite Province (YPP), which comprises occurrences of spodumene rich pegmatites over an area of more than 5,000 km2. The Muskox Pegmatite Lithium project hosts the CM-1 pegmatite, a coarse-grained, spodumene-bearing pegmatite that crops-out 100 meters north of the paved, all-season Highway 4. The pegmatite has been traced over a strike length of ~730 m and is up to 11 m wide (Figure 2). The Property is easily accessible by paved road.

Highlights from channel sampling completed by RGV Lithium in 2022 along the CM-1 pegmatite include 1.34% Li2O over 5 m and 1.26% Li2O over 11 m (Table 1). A total of ten channel samples were completed over the ~700 m strike length. Beyond the CM-1 pegmatite, most of the 50 km2 of the project area remains under-explored. Gama has identified additional prospective pegmatites from satellite imagery that have no record of historical work, representing exciting targets for a phase 1 exploration program.

Lithium-bearing pegmatites within the Yellowknife Pegmatite Province were identified in the mid-1940's. Various exploration programs have been conducted in the region, particularly during the late 1970's/early 1980's.

More recently there has been a resurgence of exploration in pegmatites as the electric vehicle demand for lithium has put pressure on an undersupplied market. Owing to the notable endowment of hard rock lithium pegmatites, the Yellowknife Pegmatite Province has been a benefactor of notably increased activity and interest. 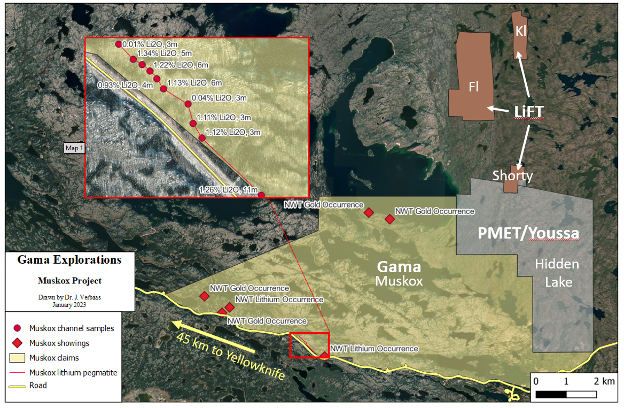 Table 1. Assay results from recent channel sampling of the CM-1 pegmatite within the Muskox Pegmatite-Lithium Project. Note that all samples are also indicated on the inset map in figure 2. Lengths above are in (m), Coordinates are in NAD83 UTM.

Pursuant to the terms of the Agreement, the Company will have an option to acquire a 100% interest in the Property from RGV Lithium Explorations Inc. In order to exercise the option, Gama will be required to make a payment of $400,000 in cash, as follows:

In the case that the vendor elects to receive common shares of Gama pursuant to the above payments, the shares will be issued at a price per share equal to the 10-day VWAP as at the date of payment, subject to a floor price equal to the minimum price permitted under CSE policies.

Further, Gama will be required to incur $1,500,000 in exploration expenditures on the Property on or prior to the fourth anniversary of the signing date, as follows:

In conjunction with the Muskox Property acquisition, Gama will be conducting a non-brokered private placement of up to 7,777,778 units (each, a "Unit") at a price of $0.45 per Unit for gross proceeds of up to $3,500,000 (the "Offering"). Each Unit will consist of one common share of the Company (each, a "Share") and one half of one common share purchase warrant (each whole warrant, a "Warrant"). Each Warrant exercisable into one additional Share at a price of $0.80 for three years after the date of issuance. Closing of the Offering is subject to the acceptance of the CSE. The Company intends to use the proceeds of the Offering to commence detailed geological mapping and prospecting work at the Property in preparation for a field exploration campaign and for general working capital. Additionally, it is anticipated that certain proceeds will be allocated towards airborne surveys and field work on the Company's Tyee Nickel-Copper project on in Quebec.

All securities to be issued under the Offering will be subject to a statutory hold period expiring four months and one day from the date of issuance. The Company anticipates that the majority of the subscriptions will be from arm's length parties, although insiders may participate in the Offering. The Company may pay finders' fees on the Offering, as permitted by applicable securities law.

The lithium assay data in Figure 2 and Table 1 was collected and sent for assay by RGV and field sampling methods were not independently verified by the QP. Samples were assayed by Actlabs using a TD-ICP analysis and overlimits were assayed using 4 acid ICP-OES for all TD-ICP Li values over 5,000 ppm. Actlabs maintains a rigorous QA/QC protocol including blanks, standards, duplicates and prep duplicates which all yielded acceptable values.

Dr. Thomas Hawkins, P.Geo., an independent consulting geologist, serves as a qualified person as defined by NI 43-101 and has reviewed and approved the scientific and technical information in this news release.

Gama is a Canadian company listed on the Canadian Securities Exchange (CSE: GAMA), and on the Frankfurt Stock Exchange (FSE: N79). The Company is a mineral exploration company focused on the acquisition, exploration, and development of mineral properties containing metals used in green technologies and the renewable energy sector. The Company recently announced the addition of the Muskox Pegmatite Lithium Project situated within the Yellowknife Pegmatite Province in the Northwest Territories, to compliment its existing portfolio consisting of the Big Onion Copper-Molybdenum Project located a short 20-minute drive from the town of Smithers in northern British Columbia (option to earn 100%). Further, GAMA owns 100% of the Tyee Nickel-Copper Massive Sulphide Project located in North-Eastern Quebec. The Company continuously evaluates opportunities to acquire interest in additional exploration stage mineral properties in stable jurisdictions.

The Canadian Securities Exchange has not reviewed this press release and does not accept responsibility for the adequacy or accuracy of this news release.